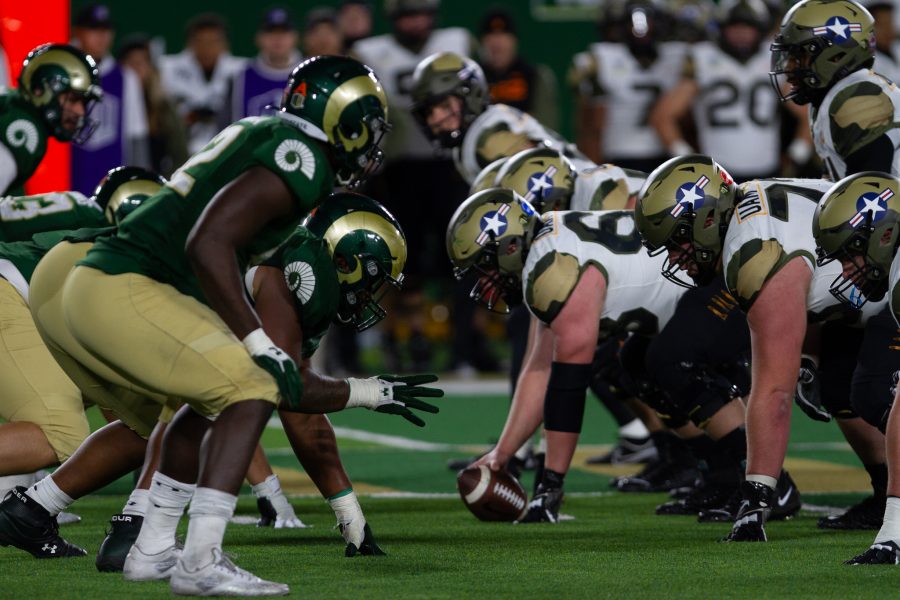 The offensive and defensive lines of the United States Air Force Academy and Colorado State University line up Nov. 13. The Rams lost to the Falcons 35-21, marking their fifth straight loss to the Falcons. (Gregory James | The Collegian)

For the second straight contest, the Colorado State Rams struggled to stop the run, as they allowed 388 rushing yards in a 35-21 defeat to the Air Force Falcons. The outcome marks the Rams’ fourth consecutive loss.

The Rams fell behind early on and were never fully able to recover after allowing 21 first quarter points. After scoring on their first offensive possession, Air Force intercepted Rams quarterback Todd Centeio on the following drive, setting up a shortened field for the Falcons’ offense. The Falcons took full advantage of the shortened field by capping off an eight play, 42 yard drive with a six-yard rushing touchdown from Brad Roberts.

Colorado State’s offense would battle back, as Centeio responded with a 15-yard rushing touchdown of his own to give the Rams their first points of the game. However, the momentum shift was short lived, as Falcons quarterback Haaziq Daniels found a wide-open Brandon Lewis for an explosive 92-yard touchdown pass on the following drive.

Rams tailback David Bailey added his first touchdown of the game on a one-yard rush, cutting the Falcon’s lead to one possession. Colorado State entered the halftime break trailing 14-21.

The second half would paint a similar picture, as Colorado State’s defense struggled to stop a potent Falcons offensive attack. While only completing four passes, Air Force finished the game with 509 total yards of offense.

Bailey’s second touchdown of the game came on a 14-yard run to keep the Rams within striking distance. Despite the offense keeping things close for most of the game, things began to fully unravel for the Rams in the second half. After scoring twice in the third quarter, the Falcons halted the Rams in the end zone with Centeio throwing his second interception of the night. Centeio now has four interceptions within the last two games.

Air Force continued to run the ball successfully and essentially ran out the clock for the remainder of the contest, securing the Ram-Falcon trophy for the fifth time since 2015.