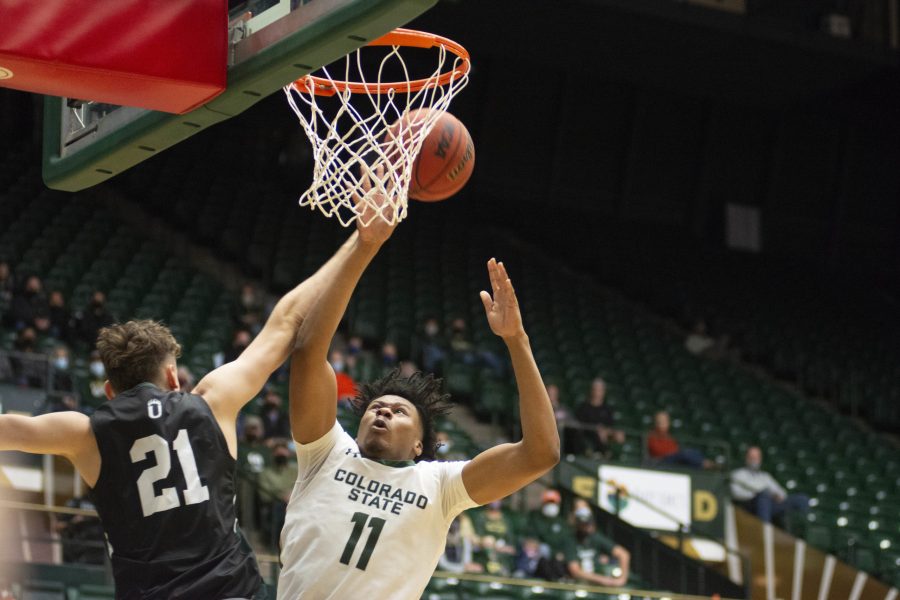 The Colorado State University men’s basketball team kicked off their 2021-22 season in Moby Arena against Adams State University Oct. 31 for an exhibition game. The Rams dominated the Grizzlies in a blowout 92-55, bringing the energy of basketball back to Moby.

The last preseason game gives the Rams the opportunity to make changes, integrate new players and work out any last-minute jitters before they make their official debut next week against Oral Roberts University.

The first half of the exhibition was game over for our Rams starters as they dominated the court and set the pace for the rest to unfold. Starters for Colorado State included guards Isaiah Stevens and Kendle Moore alongside forwards Adam Thistlewood, David Roddy and Dischon Thomas.

As the Grizzlies moved quickly, they grabbed a quick lead in the first two minutes of the half (5-0), showing the Rams they were ready for some work. Sooner than later, the Rams’ first two were put up by a layup in the paint by powerhouse Roddy in the first three minutes, assisted by Stevens.

The two teams went back and forth until CSU decided to take control and gained a six-point lead with just over seven minutes to go in the first half, 25-19. After a jumper by Roddy, the Rams didn’t look back and would remain in the lead for the rest of the half.

The tassel for the lead started getting farther away for Adams State as they completed the first half with 22 points; the last time they scored with nearly four minutes left. This left the Rams plenty of time to cruise to the lead, finishing the first half 43-22.

With the second 20 minutes starting, CSU remained consistent as they stayed at least 19 points ahead of the Grizzles for the first five minutes. Adams State tried to hang in there, but after a fast break three-pointer by Ram Chandler Jacobs, the Grizzles were left in the dust.

The Rams found themselves with a 27-point lead and stayed with their momentum as sophomore James Moors scored 10 consecutive points for Colorado State to bring them to a 68-37 lead with just over 12 minutes left in the game.

Less than seven minutes later and a few substitutions, CSU would reach their biggest lead of the game with a jump shot by guard Isaiah Rivera, making it 87-41 and essentially confirming that the Grizzles should warm up the bus. Adams State added 14 more points, with four of those being free throws, adding to an overall 55% on the line.

CSU finished the game winning 92-55 and went 34-60 for field goals, beating Adams State’s 20-59. The Rams also outran the Grizzles as they utilized their endurance to gain 36 points on fast breaks while CSU limited ASU to only eight points. Star junior Stevens left the floor with 19 points under his belt and six assists as he seems prepared for the season ahead.

With fans getting a glimpse of what’s to come this basketball season, the Rams are ready for the challenges ahead. CSU will officially hit the court for their first regular season game Nov. 9 to face off the Oral Roberts University Eagles at Moby Arena.