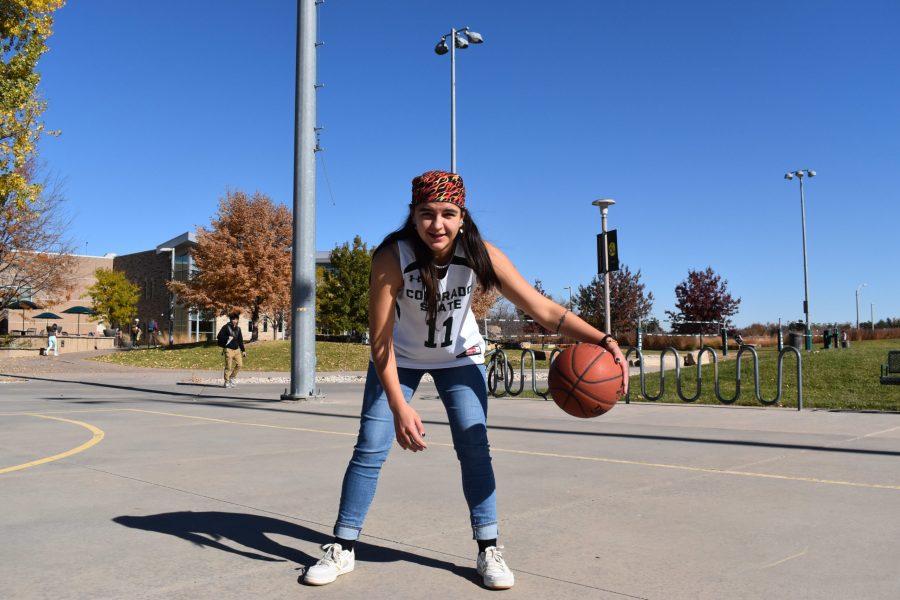 Laramie Woods, President of the Colorado State University Woman’s Club Basketball Team, dribbles a basketball on the court outside of the Student Recreation Center Nov. 5. (Michael Giles | The Collegian).

This week’s Indigenous player spotlight is on Laramie Woods. Woods is a junior at Colorado State University studying ecosystem science and sustainability and is also president of the women’s club basketball team.

She is from Ault, Colorado, just 30 minutes east of Fort Collins and gets most of her cultural insight from her mother, who is from a Navajo reservation in Arizona.

Sports, in general, have a big emphasis on bringing people of different backgrounds together. … They all are resorting to something that they all love, and it’s something that connects everybody despite the background of whoever is playing.” -Laramie Woods, CSU women’s club basketball president

Woods said she cannot remember when she first started playing basketball, though she knows it was when she was very young. She developed such a passion for the sport while growing up and playing that she has yet to stop.

“I don’t even remember the last time I wasn’t playing basketball,” Woods said.

Woods has a strong value for commitment within herself and the things she puts her mind to.

She initially became involved with the CSU women’s club basketball team during her freshman year. However, when the pandemic started, the club had to take a break. Woods decided to step up to take on a leadership role with the team after word started to spread that the women’s club basketball team was under the threat of not being able to continue.

“It’s either all in or all out,” Woods said. “There’s no 50/50 of your effort as well as your mental capacity towards something.”

Woods has a remarkable work ethic when it comes to being the president of the women’s basketball team. She values working as a team through collaboration and shines a light on her principle of individualism.

“If you’re not strong within yourself, then how can you rely on other people to rely on you?” Woods asked.

As she leads the club basketball team, she leads the players to strive and be the best athletes they can be on the court while stressing for them to just have fun.

“All of the people who are wanting to come out and play basketball are looking to play basketball, and if they’re not having fun, then they are not going to be capitalizing on all these other areas that they have the potential to be,” Woods said. “So I always push to just have fun, and don’t get down on yourself because … that’s when everything just starts to go out the window. And I just push, ‘Don’t overthink the game of basketball, and just have fun because that’s when you’re gonna have the results of an actual good play.'”

Woods not only has a huge heart for basketball but also for the love of sports in general.

“Sports, in general, have a big emphasis on bringing people of different backgrounds together,” Woods said. “They all are resorting to something that they all love, and it’s something that connects everybody despite the background of whoever is playing.”

To stay updated on Woods and the Colorado State women’s club basketball team, follow their Instagram page for updates on games and events coming up for the 2021-22 season @wcbb_csu.