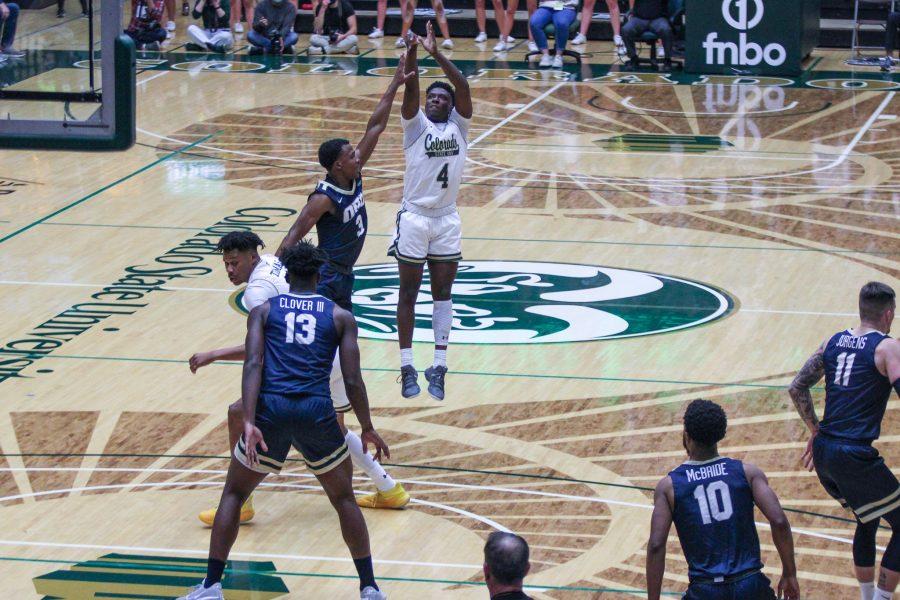 The Colorado State University men’s basketball squad took the court last night for the first time in 619 days for their regular season debut as they hosted the Oral Roberts University Golden Eagles. With the fans back and louder than ever, the CSU Rams snatched their first win in fashion in finishing 109-80.

The Rams had a rough start right after tip off as the Golden Eagles came sturdy on defense until Moore tripped up ORU and drained a three, taking their first lead at 6-4. Colorado State did not lose the lead for the rest of the night.

Halfway through the first half, CSU was looking good, as six different Rams all added points to the board before the nine minute mark. And sharing the ball wasn’t the only thing going well for the Rams — their defense kept them afloat, holding the Golden Eagles below until halftime, ending 50-43.

As one could expect, the Golden Eagles were trying to get any kind of momentum, as they went several minutes without an addition to the scoreboard but continued to be outrun by a dominant and in-shape CSU team.”

In the first half, Colorado State outscored the Golden Eagles in threes (7-4), free throws (9-3) and blocks (6-0) and tied for rebounds at 21. Tonje led at the half with 18 points while Golden Eagles star player Max Abmas was held to 15.

Going into the second 20 minutes, the Rams kept up the heat with help from junior Tonje and fifth-year Chandler Jacobs as they added some shots to push the lead 62-49 with 15:54 left in the game. Oral Roberts tried to keep up, but CSU simply said no.

After a slip by Abmas and a massive block by Dischon Thomas that was swatted into the Golden Eagles’ bench, the Rams didn’t look back, taking a 72-54 lead with 13 minutes left in the game.

Roddy kept the momentum going with a three followed by a turnaround jumper from James Moors. The Rams continued to rain threes in Moby Arena and were four for four with just over 11 minutes to go.

Fresh off the bench, Baylor Hebb added a nice jumper that was soon followed by Roddy’s first dunk of the season as he took an open lane to make an 88-60 lead. ORU was getting a reality check after making it to the NCAA Sweet 16 in March.

Tonje decided he wanted some of that as well, taking his first dunk less than a minute later, but still the Rams showed no mercy as Thomas added a third dunk over a minute later, getting CSU to a 24-point lead.

As one could expect, the Golden Eagles were trying to get any kind of momentum, as they went several minutes without an addition to the scoreboard but continued to be outrun by a dominant and in-shape CSU team.

Oral Roberts looked tired with three minutes left as they struggled to defend against the Rams and could not get a shot to fall. With a minute left in the game, it was clear who owned the night.

Tonje went home at the top of the scoring boards with 31 points, three rebounds and one assist, while Stevens ended with 13-2-6.

The Rams will return to Moby Arena this Friday to take on the University of Arkansas at Pine Bluff at 8 p.m.