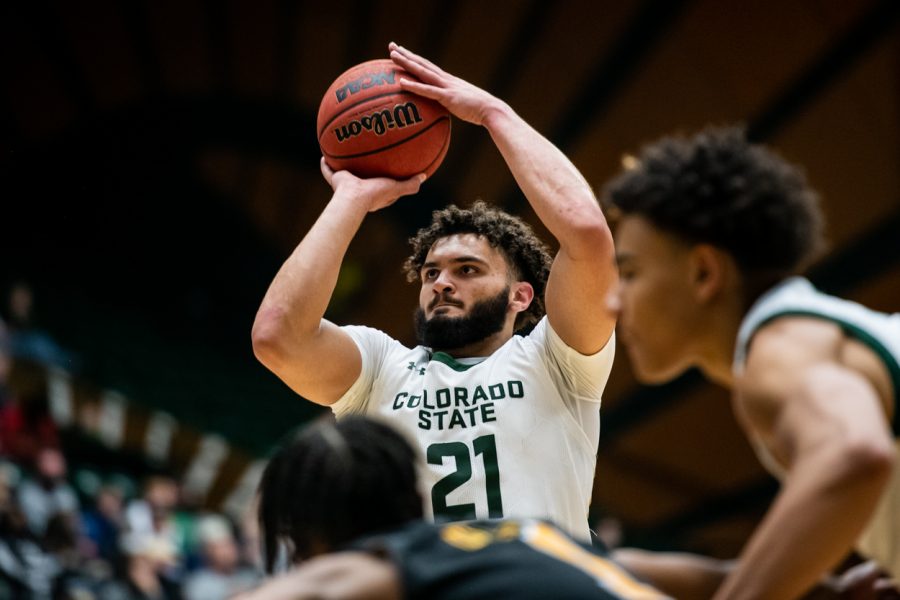 Junior David Roddy (21) makes a free throw in the second half Nov. 12. (Lucy Morantz | The Collegian)

After defeating the Bears 88-79, the Rams are now 7-0 for the first time since the 2014-15 season, when they went 14-0. The Bears came into Moby with a 3-4 overall record and were looking to break their three-game losing streak.

Before tipoff, some players that were catching eyes include CSU junior David Roddy, who was named MVP in the Paradise Jam tournament, averaging 31 points and 6.7 rebounds per game. Roddy was also named to the Preseason All-Mountain West team along with teammate Isaiah Stevens.

CSU will be on the lookout for Bears senior guard Daylen Kountz, who is a 2020 Third Team All-Big Sky leader and was in the No. 4 spot for points in the Big Sky league. UNC 6-foot-9-inch forward Kur Jongkuch was also a possible threat with team leads in rebounds and field goal percentage.

Back in Moby Arena, CSU started on the floor with a personal foul by Adam Thistlewood, which led to the Bears snatching the first two points on the board, but Stevens was quick to tie, grabbing a jumper in the next possession. Dischon Thomas got the crowd loud after dropping a soft three from the left side, making it 8-5 Bears.

Thomas wanted more as he got a pass from Kendle Moore into the paint and slammed it down over the Bears for a dunk, Rams down 11-7. A few minutes later, the Bears got a dunk of their own as Dalton Knecht kept the lead from the Rams at 19-11.

Freshman Ram Jalen Lake tried keeping the team afloat as he came off the bench with a hot hand, adding eight points in less than three minutes to close the gap, 25-21 UNC.

John Tonje got on the board with two stylish layups, tying the Rams at 25. The following play, Roddy hit a 3-pointer, getting Colorado State their first lead of the game at 28-25 with 7:34 left on the clock.

Thomas caught the hot hand fever with two 3-pointers coming from the left side, stretching the Rams’ lead to nine points. The Bears made a late comeback as the Rams struggled to keep the ball and make shots. UNC led 41-36 with 1:07 left until halftime. The Rams ended the half with a quick layup from Roddy but headed to the locker room down by three.

Heading into the second half, Roddy had a chance to add two with free throws but was unsuccessful, and the Bears grabbed the rebound and added a three from game standout Bodie Hume to increase their lead to 44-38.

UNC got some momentum early in the second half as they outscored the Rams 11-2 in the first four minutes. Through some Rams defensive mix-ups, they tried turning it around with quick, easy layups on the opposite side, closing their point difference to 11.

Both teams seemed to get into a rhythm with 13 minutes left in the game as points went back and forth on four consecutive plays, finishing with Tonje having a smooth three but the Bears still up 62-54.

Chandler Jacobs kept the crowd up with a quick steal on the defensive side followed by a spin-around fast-break layup. Bears guard Hume started to be an issue for the Rams in the beginning of the second half as he had five 3-pointers and a jumper, keeping UNC in the lead.

“I thought the crowd was awesome,” head coach Niko Medved said in a postgame press conference. “For not having students in session, I thought that the crowd really was great today and really helped us when we needed it down the stretch.”

Tonje kept the crowd alive with a fast left corner three, getting the Rams closer to the lead, UNC 70-64. With a layup from Jacobs soon followed by a layup and a free throw from Tonje, the Rams got themselves within a point with 6:43 left in the game, 70-69.

Roddy had a chance to tie with two free throws and successfully did so, getting the Rams at an even 71-71 with just over six minutes to go in the game. The Bears were the first to respond with a deep 3-pointer, taking the lead once again.

After a fast break from Roddy, which led to a missed dunk that ended with him on his back, the two teams were getting rowdy as the referees were being whistle-happy trying to control both momentums. However, Jacobs took advantage of the free shots, making two and stretching to a 78-75 CSU lead.

Stevens kept the energy with a jumper and a free throw, creating a seven-point lead with just over 30 seconds to go, which was followed by an aggressive altercation between the players on the court after the whistle was blown. After both teams were pushed back to their benches, the Rams were ready to finish it off.

Following a technical foul from Moore and good free throws from the Bears, it was up to composure for the remaining 25 seconds as the teams continued to exchange fouls. Colorado State wrapped up the game on the line at 86.4% average on free throws versus a 64.3% for UNC.

After several failed attempts by the Bears to get the lead back and Colorado State keeping fans on their toes, CSU came out with an 88-79 win, extending their winning streak. Stevens and Tonje ended the night with 20 points each; Stevens and Moore tied with six assists and Roddy ended the game leading with 10 rebounds.

The Rams will return to Moby Arena Dec. 1  at 7 p.m. to take on the University of Arkansas at Little Rock as they host their next two games before heading to Texas next weekend.