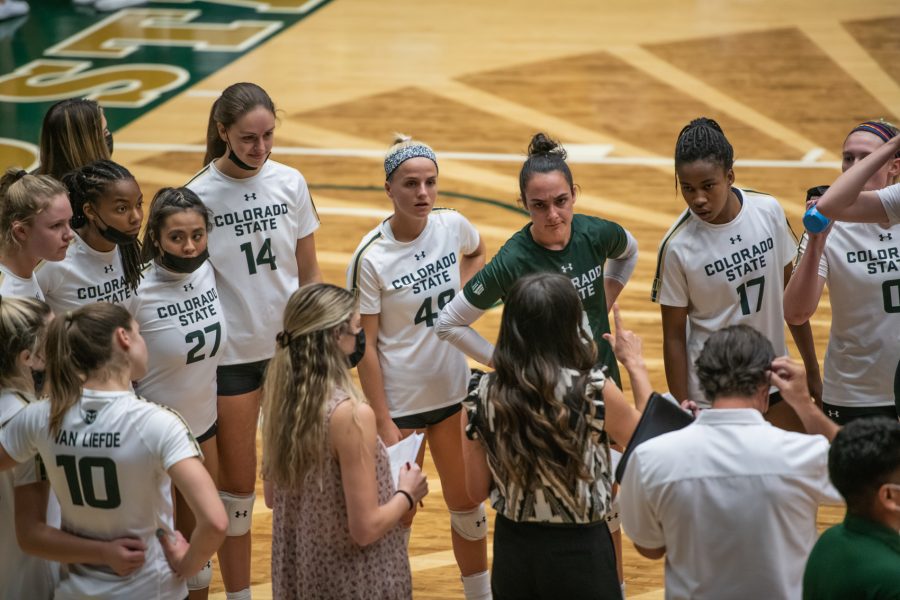 During a timeout at the beginning of the second set, players listen to associate head coach Emily Kohan Sept. 28. (Lucy Morantz | The Collegian)

The Colorado State University Rams still remain at the top of the Mountain West Conference standings after Tuesday, but their road struggles are still persistent.

The Rams have three matches remaining before the 2021 Mountain West Women’s Volleyball Championship in Las Vegas. Out of the three, CSU will be on the road for two of the matches.

The Rams were without head coach Tom Hilbert on Tuesday because of COVID-19 protocols. Hilbert will also miss the last home game of the regular season on Saturday against Fresno State. Associate head coach Emily Kohan will be the interim head coach until Hilbert can return.

The Rams started the match against the Cowgirls in a familiar way. CSU went up 2-0, but Wyoming wanted no part in another Rams sweep.

Set two was more of the same for the teams until late in the set. CSU went up 17-14, but Wyoming cut things close with two more points. However, the Rams increased the lead before eventually closing things out at 25-21.

Looking to sweep again, the Rams got off to a good start in the third set. CSU grabbed its biggest lead midway through the set 12-8. Wyoming, as they did in the first two sets, hung around a bit to make things interesting. The Cowgirls scored seven straight points, grabbed a 15-14 lead and kept rolling to go up 18-14. Wyoming kept scoring, winning 25-18 and avoiding the sweep.

Both teams battled early, keeping things tight until the score reached 9-9. The Cowgirls scored four straight to go up 13-9. Then, it was Rams’ turn to battle back and that is what they did. The Rams tied it up at 15 and the set was back to trading points before they also took the lead 20-19. On the other hand, the Cowgirls were quick to recover and went up 22-21. The set was tied at 23 when Wyoming evened the match by scoring two straight — winning 25-23.

Wyoming had to avoid the sweep in set three. In set five, the Rams wanted to avoid the reverse sweep. CSU, however, had limited space in the tank to keep things going. The only lead CSU held in the final set was at the beginning as they scored the first point. Then, Wyoming took over. The Cowgirls went up 6-4, and the Rams tied at six. But after Wyoming regained the lead, there was no hope for CSU. The Rams only scored three more points after the tie while the Cowgirls closed it out 15-9.

We're back home on Saturday to close our Moby Arena schedule facing Fresno State at noon.#PointRams

The Rams are back in action Saturday at home against the Fresno Bulldogs. After that, CSU will head to Logan, Utah, for a matchup against Utah State University. The Rams will finish the regular season on Nov. 20 in Boise, Idaho, against Boise State University.