Record-breaking day not enough for CSU to defend Bronze Boot 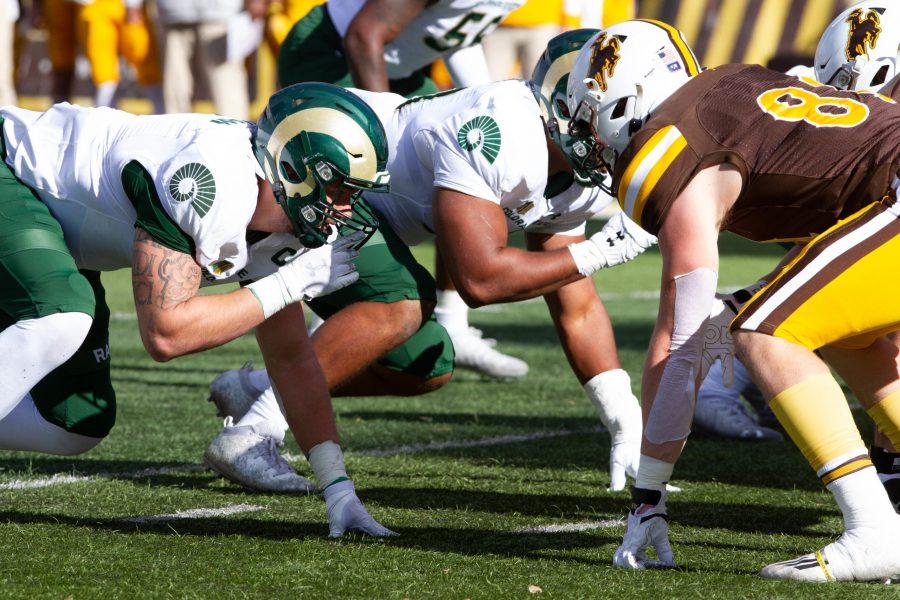 The Colorado State University Rams (3-6 overall, 2-3 conference) took on the University of Wyoming Cowboys (5-4, 1-4) in the 113th Border War football game at War Memorial Stadium in Laramie, Wyoming. The Rams looked to defend the Bronze Boot for the first time since 2016. Last time these rivals met almost a year ago to the day, CSU won 34-24 at Canvas Stadium in Fort Collins.

Offensively, the Rams posted a total of 357 yards, but allowed 477 on the defensive side of the ball. Quarterback Todd Centeio completed 20 of his 36 attempts, posted two passing touchdowns along with two interceptions. Trey McBride tallied up 98 receiving yards in 9 receptions, good for two all-time records for CSU: career receiving yards for a tight end and single season receptions for a tight end. The defense racked up two forced fumbles from Jack Howell and Tavian Brown.

The Rams got the ball to start the game, and after a booming kick from Cowboys kicker John Hoyland, CSU got off to a rough start, capping off a short first drive with a quick three-and-out. After a 64-yard punt from Ryan Stonehouse, the Cowboys would start their first drive from their own 27-yard line.

Colorado State would quickly get the ball back thanks to a turnover on downs after Cowboys running back Xazavian Valladay recovered his own fumble short of the first down marker. After marching their way into the red zone, Centeio found receiver Dante Wright for a four-yard touchdown reception. A Jonathan Terry extra point put the Rams up 7-0.

The Cowboys hit back quickly when quarterback Levi Williams scrambled his way to the end zone from 43 yards out. Hoyland tied the game at 7-7.

To start the second quarter, Cowboys running back Titus Swen ran 87 yards to pin the Rams defense down in the red zone, a season-best for the Cowboys. Two plays later, Valladay ran it five yards into the end zone to take a 14-7 lead.

On the next drive, Centeio found tight end McBride for a 30-yard gain.  This reception brought his total yardage to 59 yards on the day, breaking the 45-yard threshold needed to overtake the CSU school record for career receiving yards for a tight end. To cap the drive, Cayden Camper nailed a 27-yard field goal to cut the deficit to 14-10.

With time winding down on the game clock, Centeio found Wright again in the end zone, cutting the Cowboys’ lead to 31-17 just under four minutes to go.

Towards the halfway point of the second quarter, Howell forced a fumble and linebacker Cam’Ron Carter recovered the ball putting the Rams in good field position near midfield. The drive would prove unproductive, and shortly before halftime, Williams had another long rush, this time for 52 yards, a season high for him, to set up a 29-yard field goal by Hoyland to put the Cowboys up by a touchdown once again.

The Cowboys got the ball to start the second half, and the Rams defense forced a 44-yard field goal attempt that was missed by Hoyland. Then the Rams found great success in their run game, running the ball eight times in eight plays for 67 yards. Unable to find the end zone, Camper was set up for a 24-yard field goal, but hit the right upright and missed it.

Wyoming went up two scores after Isaiah Neyor snagged a 25-yard pass from Williams with 1:36 left in the third quarter.  The Cowboys got the ball back again once the second half started after a pivotal 4th and 2 pass by Centeio was intercepted by Keonte Glinton.

To start the final period of play, the Rams were backed up within their 20-yard line.  Hoping to swing some momentum in their favor, Centeio notched another interception, hauled in by linebacker Chad Muma.  The Cowboys padded their lead shortly after with the second touchdown connection between Williams and Neyor, this time for 15 yards, pushing the lead to 31-10.

With time winding down on the game clock, Centeio found Wright again in the end zone, cutting the Cowboys’ lead to 31-17 just under four minutes to go. The Rams attempted to get the ball back by way of an onside kick to mount a possible comeback, but it proved unsuccessful. With only 3:30 left, the Cowboys ran the clock down to all zeros and to win the rights to the Bronze Boot until next season.

The Rams will take the field Nov. 13 as they host the United States Air Force Academy for the Military Appreciation Day game.