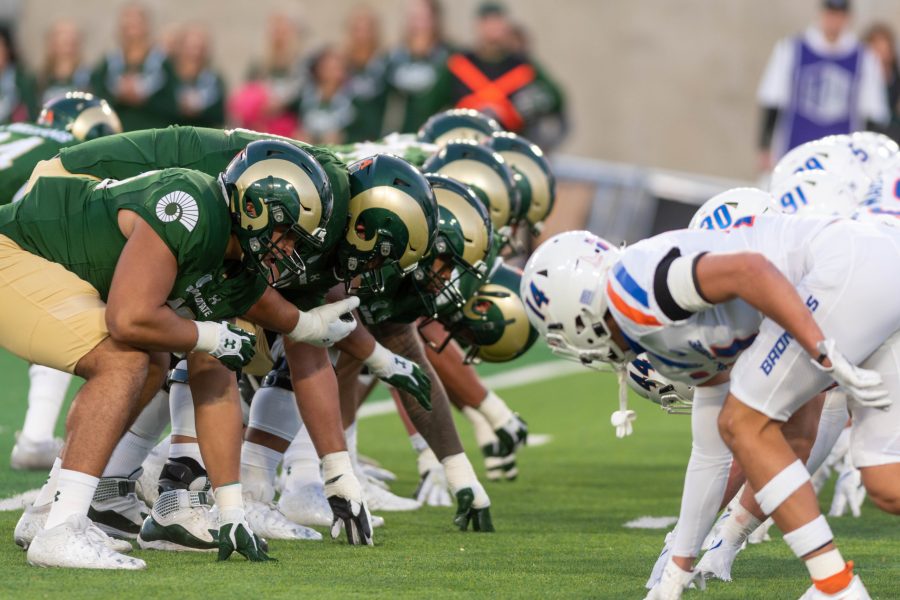 Colorado State football (3-5 overall, 2-2 conference) hit the field once again at Canvas Stadium on Saturday to take on the Boise State University Broncos (4-4, 2-2) as they get closer to the end of the season.

Todd Centeio completed 23 of 36 passes for 276 yards and one touchdown. He also added 10 carries for 65 yards on the ground. Trey McBride hauled in 10 receptions for 103 yards, while running back David Bailey struggled to get things going in the contest, finishing the game scoreless with only 37 yards rushing.

I loved our energy at halftime, … the look in our team’s eye; everything about it was excellent. I’m surprised.” -head coach Steve Addazio

The Rams struck on the first drive of the game, as Cayden Camper made a 22-yard field goal to give Colorado State an early lead. The Rams offense continued to find success by mixing things up early on with Centeio making big plays both on the ground and through the air.

Facing a third and long play on their second possession, quarterback Centeio scrambled for 22 yards to pick up a first down. On the very next play, Centeio found tight end Cameron Butler for a 30-yard touchdown pass, Butler’s first touchdown since Aug. 30, 2019.

Centeio also got tight end McBride involved early on, as the Rams leading receiver recorded six catches in the first quarter alone. Before quarter’s end, Camper added a 20-yard field goal to put Colorado State up 13, and the Rams held the Broncos scoreless through the first 15 minutes of play.

The Broncos were dealt a blow on the defensive side of the ball after safety JL Skinner was ejected from the game after being called for a targeting penalty. However, Colorado State’s offense struggled to capitalize on the penalty, as they mustered up only 26 yards of offense in the second quarter.

Despite solid defense by the Rams for the majority of the half, Boise State scored their first points of the game with 1:50 left in the second quarter. Quarterback Hank Bachmeier found Octavius Evans for a nine-yard touchdown pass to cap off a 13 play, 97-yard scoring drive. Despite failing to produce offensively for much of the second quarter, Colorado State responded with Camper’s third made field goal of the half, and the Rams took a 16-7 lead into the break.

The start of the second half proved to be a battle of field position. After Boise State punter Joel Velazquez pinned the Rams on their own two-yard line, the Rams were forced to punt after going three and out. Ryan Stonehouse launched a 64-yard punt; however, a 30-yard return by Khalil Shakir put Boise State in Rams territory. Evans scored his second touchdown of the game on a 13-yard reverse handoff to cut into the Rams lead.

For the second time in the contest, Stonehouse pinned Boise State on their own three-yard line with yet another booming punt. However, as the Broncos did in the first half, they once again used 13 plays to drive 97 yards, setting up an 11-yard receiving touchdown by Stefan Cobbs. The Rams’ only points of the quarter came off Camper’s fourth field goal of the game, this time a 28-yarder.

“I think our third quarter was not a good quarter,” head coach Steve Addazio said. “I mean, it just wasn’t good on either side of the ball. We needed to come out and play lights out in the third quarter, and obviously we did not do that.”

A third-down sack by Rams lineman Toby McBride gave Colorado State some life early in the fourth quarter. Unfortunately for the Rams, they were unable to capitalize off the defensive stop, as their drive resulted in a punt from Stonehouse that was blocked by Brandon Hawkins

The blocked punt marks yet another game in which the Rams’ special teams unit has made a costly mistake. After shifting momentum back in their favor, Bachmeier hit tight end Tyneil Hopper for a 51-yard touchdown pass, and the Broncos extended their lead to two possessions. The Rams never recovered from the score, and the visitors sealed their victory by running out the remainder of the clock on their next series.