Rams move to 2-0 in conference after dominant defense 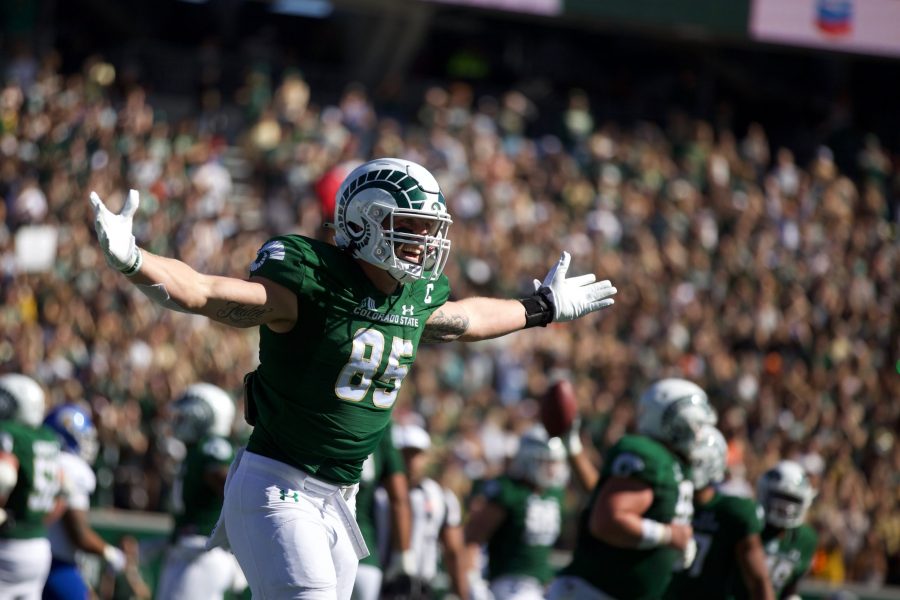 The Colorado State defense forced three turnovers and held the University of New Mexico to 69 total yards on offense, as the Rams dominated in a 36-7 road victory over the Lobos Saturday, moving to 2-0 in Mountain West Conference play.

Running back David Bailey, who missed the last two games after sustaining an injury against Iowa, finished the game with 58 rushing yards and two touchdowns. Backup tailback A’jon Vivens was carted off the field early in the second quarter of Saturday’s contest with an apparent ankle injury.

Todd Centeio threw for 289 yards and a score, while also contributing 35 yards on the ground. Tight end Trey McBride caught 7 passes for 135 yards, and Ty McCullouch hauled in four catches for 77 yards in the Rams commanding victory. Even though the offense proved triumphant, defense once again led the way for Colorado State, as the Rams held the Lobos to zero points offensively.

For the second straight game, the Rams forced an early turnover, as Marshaun Cameron recorded his first interception of the year on the Lobos second possession of the game. The Rams took full advantage of Cameron’s pick by capping off a 12 play, 72 yard drive with a two yard touchdown run from David Bailey.

Despite missing starters Vincent Picozzi and Elijah Johnson on the offensive line, the Rams continued to impose their will up front, eclipsing the century mark with 243 rushing yards in the first half.

On the other side of the ball, the Rams defense allowed only 53 total first-half yards. Lobos true freshman quarterback CJ Montes couldn’t find a rhythm all night long against a stingy Rams defense, as he finished the game completing just three of 19 passes for 11 yards and two interceptions. Montes was replaced late in the game by backup quarterback Isiah Chavez.

New Mexico would find some fortune in their return game, as the Colorado State special teams unit struggled to stop Lobos return specialist Luke Wysong. After a 36 yard kick return earlier in the game, Wysong returned a punt 63 yards to the house, resulting in the Lobos first score of the game. Colorado State responded with a 47 yard field goal by Cayden Camper, his second of the half. After Camper missed a 36 yard field goal with time winding down, the Rams entered the break with a 13-7 lead.

The second half would prove much the same for both teams, as the Rams continued to dominate on both sides of the ball. Bailey added his second touchdown of the game on a two yard run on the Rams opening drive of the the third quarter, extending their lead to a two possession deficit. After a fumble recovery by Rams leading tackler Dequan Jackson, Camper drilled a 46 yard field goal, his third field of the contest.

The Rams continued to pile it on in the fourth quarter, as Centeio found Gary Williams for a 43 yard score. Camper added two more field goals, bringing his total to five made field goals on the game. Camper now has 11 made field goals in his last two contests. Logan Steward added a late interception as well, marking his first of the season.

The Rams continue their conference schedule on the road against Utah State University Oct. 22. The Rams last played the Aggies in September 2019, losing the contest 34-24.

Editor’s Note: This story has been updated to reflect the correct number of rushing yards achieved by both teams after the first half.