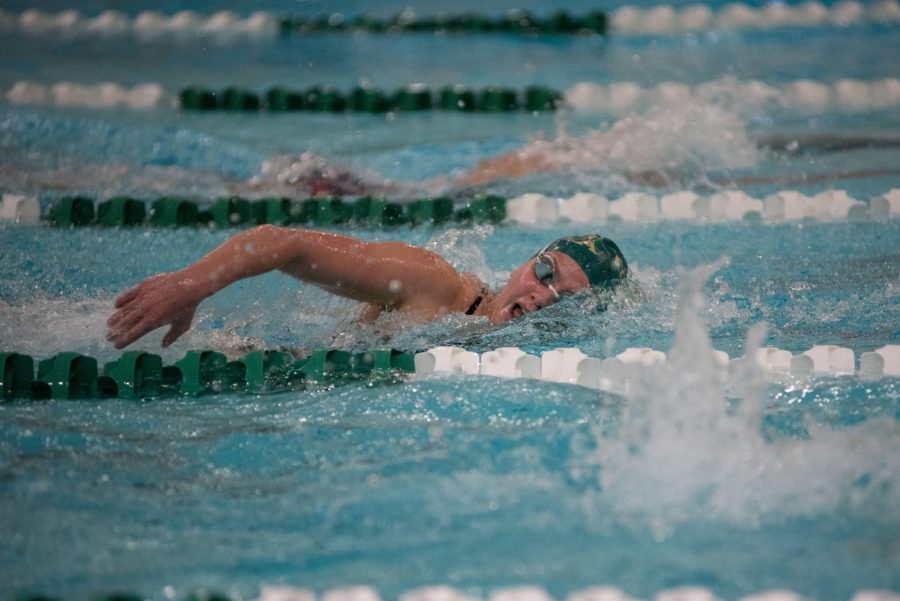 Last Friday, Colorado State University’s NCAA Division I women’s swim and dive team took on the University of Denver, and they crushed their competition.

The Rams swam hard in the water and left this meet continuing their eight-win streak. The meet against DU marked the second year in a row of beating the DU swim and dive team. The Rams won 165-135 against the Pioneers and have been maintaining a great flow this season.

The meet Oct. 15 was the first home meet with spectators at the Moby Pool since the beginning of the pandemic. While it seems the green and gold team doesn’t need a home crowd to perform well, they did not let their fans down as they gave DU their first loss of the year. Fans or no fans, the amount of support each teammate showed for each other was something exceptional to watch.

Though she has yet to make it onto the Top 10 Rams in the Mountain West list, she is undoubtedly one extraordinary athlete to look out for.”

Six new freshmen joined this year’s team, including standout freshman swimmers Maya White, Maisy Barbosa and Lindsay Gizzi. These freshmen were not only rumored to be up-and-coming swim athletes before arriving at CSU but have yet to let the team down.

Barbosa is another freshman member of the women’s swim squad who had a remarkable meet Friday. She holds the second-fastest 400-yard individual medley time in the Mountain West Conference with 4:25.17. Just a few weeks ago, Barbosa also won the Mountain West swimmer of the week award.

Gizzi, another promising freshman swim athlete, won the Mountain West diver of the week award during Homecoming week. Gizzi hit the Zone cut in one of the first swim meets this season, making her eligible to compete at the NCAA Zone diving meet in March 2022. Though she has yet to make it onto the Top 10 Rams in the Mountain West list, she is undoubtedly one extraordinary athlete to look out for.

Following Friday’s match, the Rams headed over to Golden, Colorado, to compete against the Colorado School of Mines and the University of Mary. Saturday’s meet again came to a win, getting the CSU team to a 10-0 overall record.

Next week, the CSU women’s swim and dive team has another home meet as they compete against the University of Idaho Oct. 22. This will be a meet to mark your calendars for as the squad looks to continue their winning season.

Michael Giles can be reached at sports@collegian.com or on Twitter @michaelrenee10.