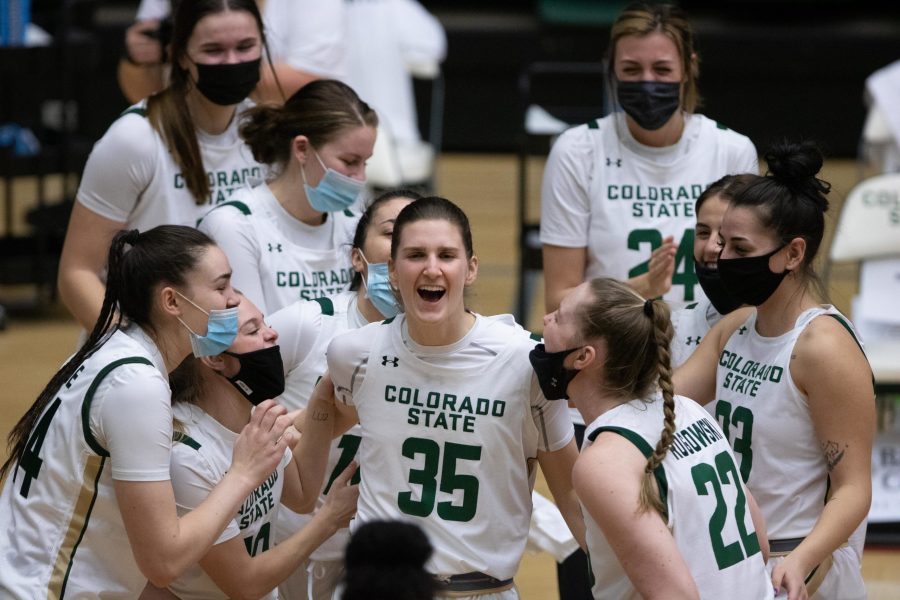 Lore Devos (35) walks onto the court before Colorado State University’s game against the University of Wyoming Feb. 6. (Devin Cornelius | The Collegian)

With the changing of the leaves and the Colorado breeze getting colder, Fort Collins is preparing itself for the approach of the basketball season. The Colorado State women’s basketball team is looking to make a big impact in the Mountain West Conference this year. With the season approaching, the Rams will make their debut on the court next week in Moby Arena against Chadron State College.

CSU received one vote to be placed first and 207 total points, ranking the team fourth in the conference. The runner-up of last season’s 2021 Mountain West Women’s Basketball Championship, California State University, Fresno, was placed first in the conference. The two teams that were ranked above Colorado State last year in the regular season, the University of New Mexico and the University of Nevada, Las Vegas, were given the places of second and third.

The team’s winning season last year, going 15-6, placed them third in the Mountain West Conference going into the tournament, but the Rams lost in their first game against Boise State University. The team did not lose a single game at home last season. With the COVID-19 guidelines that Colorado State has, there is hope to see a big show in Moby Arena with fans. Fort Collins also hopes to have a more set schedule this season after six games were postponed or canceled last year.

With 12 on the roster instead of 16 from last year, Colorado State University is excited to see the impacts that each player will be able to make in the games. The team looks to be locked in this season and will fight to reach their goal.

Returning from last season is the team’s main leading scorer, McKenna Hofschild. Hofschild averaged 13.4 points a game last year and was a key role for the Rams offense. She also led the Mountain West in assists with 5.4, so we can expect to see all aspects of the team to be used this coming season — it will be interesting to see what she has to bring.

The glass cleaner, Karly Murphy, also comes back this year. She led the team last season with 55 offensive rebounds and had a total of 123 rebounds, averaging 7.7 rebounds a game. Murphy will be Hofschild’s put-back center. Murphy will be the one to rely on to get the boards and get the ball to the guards to put the pressure on teams.

It will be exciting to see what current players have to bring, but the team also has some new faces to see that make the team seem just more elite — like in-conference transfer Kendyll Kinzer from Fresno State. Listed at 6 feet and 1 inch, she will be a great addition to the team and brings more post plays to happen. This will also open up the perimeter for the shooters to score.

Also, Jess Moors, a 6-foot freshman from New Zealand, and 6-foot-1-inch freshman Clara Gomez from Spain are bringing more height to the team.

The Rams are preparing themselves for the season, and Fort Collins should be ready for what they have to prove in the conference with all the hard work from the off-season. Colorado State could do big things through the program as a strong competitor. Make your way to Moby Arena to see the Rams as they take on Chadron State on Nov. 3 at 6 p.m.