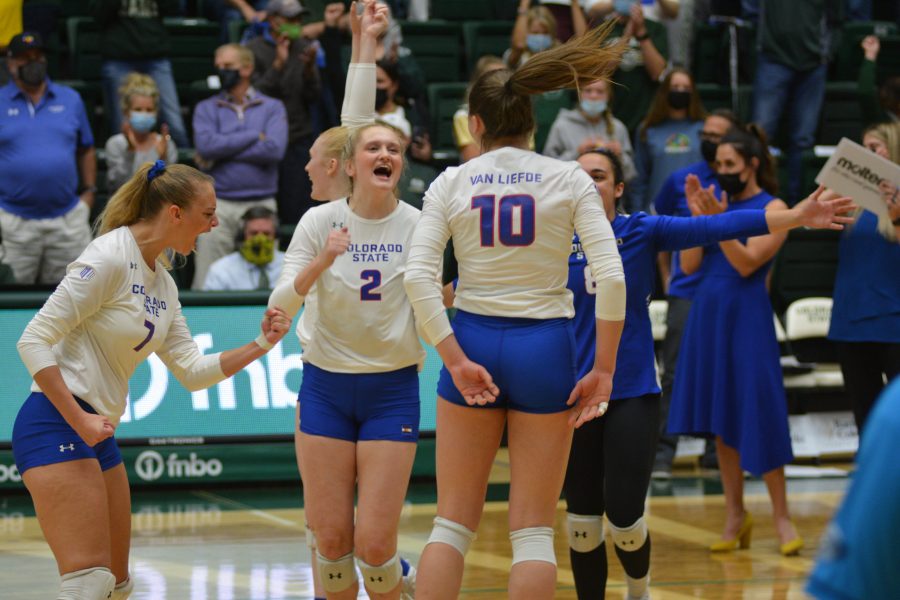 Colorado State volleyball team members celebrate a decision by the referees to award a point to the team that gave the Rams a 29-27 set win Oct. 23. The Rams won 3-0 against the visiting University of Nevada Las Vegas Rebels. (Gregory James | The Collegian)

While in Fort Collins for the State Pride match Oct. 23, the Rams hosted a top team in the Mountain West: the University of Nevada, Las Vegas (6-4, 15-6).

The Aztecs have struggled this season. The Rams, however, have been rolling through teams.

The Rams got going right away: After giving up the first point of the match, they scored five straight. Both teams were consistently scoring, unwilling to let up. Set one had plenty of scoring runs. Early in the match, SDSU cut the deficit down to 13-10. CSU answered with three consecutive points to extend the lead.

SDSU, however, had no more interest in playing the comeback game. Right after the Rams extended the lead 16-10, the Aztecs exploded with a six-point run to tie things up. The Rams were able to freeze SDSU’s momentum, scoring two straight points afterward, but the Aztecs were right there with them.

The set was tied at 20, and both teams were matching each other. There were six score ties from 20 to the final point of the match. But in most of those, SDSU regained the lead and CSU played catchup. The Aztecs closed it out 28-26 to take a 1-0 lead.

This time, the Aztecs got off to a commanding lead and sustained it. SDSU went up 8-3 and did not lose the lead for the remainder of the match. The closest the Rams got to the Aztecs was two points four separate times. SDSU closed it out 25-21 to go up 2-0.

Got it done in the third, finishing the set on a 3-0 run. Time to keep this momentum going!#PointRams x #MakingHerMark pic.twitter.com/yCAIhyFVat

The Rams finally turned things around in the third set. Both teams traded points for most of the set, but then CSU took off. After the match was tied up at 10, the Rams quickly found themselves up 16-12. SDSU, however, continued to fight, and the match once again came down to the final five points. The Rams were down 21-20 but scored two to reclaim the lead and closed it out at 25-22 to avoid the sweep.

The Rams were back in control after the third set, going up 9-3 early. The set was looking interesting when the Aztecs went on a scoring run and cut the lead to two at 10-8. The Rams were quick to put things away, increasing their lead 19-12. SDSU only scored two more points the remainder of the set, and CSU won 25-14.

The Rams proved themselves as the top team in the Mountain West, fending off another major conference contender.”

For the first time since Sept. 10 against Oregon State University, the Rams were in a winner-take-all fifth set. Both of this game’s teams performed well and traded points during the fifth set, which made things interesting. SDSU grabbed the first real multiple-point lead when they went up 12-10. CSU tied it then went up 13-12. After the Aztecs grabbed another point to tie it at 13-13, the Rams scored two straight to win the set and the match.

CSU showed its resiliency and pulled off the reverse, winning the match 3-2.

The University of Nevada, Las Vegas vs. Colorado State

While it ended in yet another home win for the Rams, the scores of the sets speak for themselves: This was a grueling statement match. The Rams proved themselves as the top team in the Mountain West, fending off another major conference contender.

The Rams kept regaining the lead, but UNLV was right there with them and quickly closed the gap. Near the end of the match, the Rams went up 19-18, then the Rebels scored three straight to go up 21-19. The Rams regained the lead and hit 23-22.

UNLV scored 25 first but needed to win by two. The Rams, trying to defend against a first-set loss, tied it up at 25. Kennedy Stanford then had a service ace to take the lead, and the Rams kept rolling and scored another to win a thrilling set one, 27-25.

The match was about as even as it gets. Both teams were unable to pull away. The Rams were down 7-4 but scored four straight to take the lead. Later in the set, the Rams went up 19-16. With the Rebels cutting things close, the Rams scored consecutive points to increase the lead and eventually won 25-21.

The fans definitely got their money’s worth in set three. CSU dominated this set early, going up 15-10, but they let it slip away a bit at the end. After the Rams stopped their scoring run, the Rebels went on one, this time taking a 22-20 lead. Both teams traded points down the stretch, and UNLV won the race to 25.

The Rams quickly tied it up to avoid losing the set but were playing behind. The Rebels kept taking a one-point lead and the Rams kept tying it up. After UNLV went up 27-26, the home-court advantage for the Rams took over.

The Rams tied it at 27 and then took a one-point lead. After a Van Liefde hit on match point, there was a coach’s challenge to keep the ball alive. But CSU won it, as a UNLV defender just tipped the ball before going out of bounds. The Rams completed the match by winning the set 29-27.