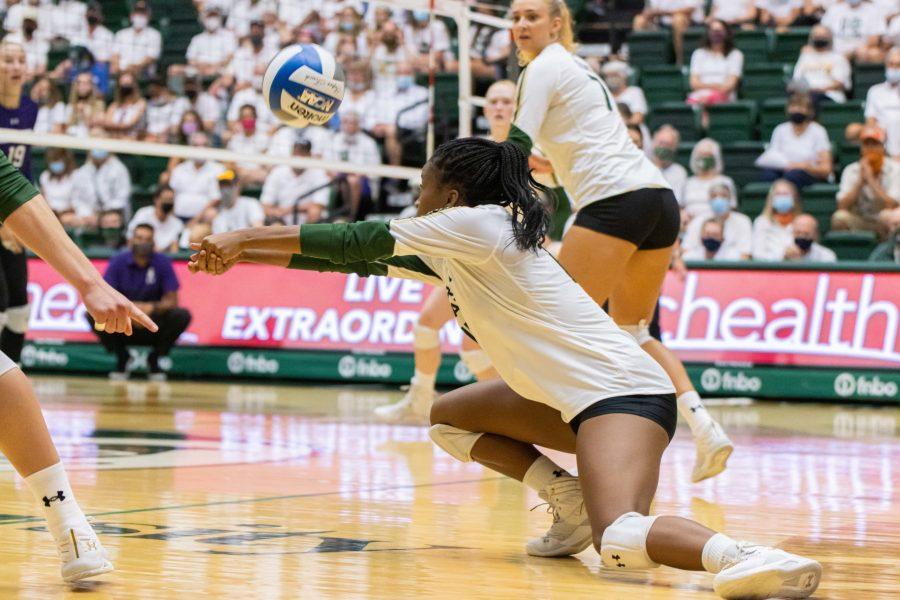 Kennedy Stanford (17) kneels down to pass the ball towards the setter, during the Colorado State University's opening match vs Northwestern University at Moby Arena. Northwestern wins 3-1. (Devin Cornelius | The Collegian)

Colorado State University volleyball had a packed weekend playing a total of three matches: two on Friday and one on Saturday. The Rams came out on top despite the long weekend, as they went 3-0 against Southern Illinois University Edwardsville (2-7), Oregon State University (2-6) and University of Alabama at Birmingham (3-4).

The Blazers snatched set one 26-24 although the two teams battled back and forth, tying throughout the set and ending in even errors, both at eight. UAB had a .097 higher hitting average while totaling four more kills than the Rams, but those numbers didn’t last for the Blazers.

Senior and this week’s Mountain West Defensive Player of the Week Alexa Roumeliotis was reassuring though, saying in a press release, “Our mentality was, ‘We have to come out with more energy than they did.’ And I think all the way through, we really did that.”

The tides changed in set two as the Rams kept UAB at a match-low .071 hitting average and outscored them on kills 12-9 and errors 4-7. CSU stayed ahead after a 7-1 scoring run, eventually taking the set 25-15 and tying the match 1-1.

With both teams wanting set three, the Rams had to come out strong, and like Roumeliotis said, “The third set is really a game changer.” For CSU, that third set was a ride to the win.

The green and gold team kept their momentum through the third set while the Blazers got lost after a six-point run, which led to a 25-14 win and 2-1 match lead. The Rams again outnumbered UAB on kills, 14-8, and with the accuracy of CSU’s defense, they only had two errors while forcing the Blazers to five.

To end the evening, Colorado State led set four from the start as they perfected their mistakes, claiming a match-high hitting average of .571, keeping the Blazers at .3 and adding only three errors to their stats.

CSU grasped the set and match win 26-17 and 3-1, respectively. For the fifth time this season, sophomore Kennedy Stanford led the team in kills, adding 17 to her personal stats, followed by Jacqi Van Liefde and Annie Sullivan both tying for 10.

While the team additionally scored a total of 11 aces, Ciera Pritchard kept the ball moving, sharing 35 assists to the offensive side. Roumeliotis finished the three-game weekend with 58 total digs as she seized the MW Defensive POW award for the fourth time in her career.

The Rams hope to continue this four-game winning streak as they head over to take on rivals the University of Colorado Boulder Buffaloes. If you can’t make the 7 p.m. away battle Sept. 16, hold tight as the Buffs will head to Moby Arena this Sept. 18 at 1 p.m.