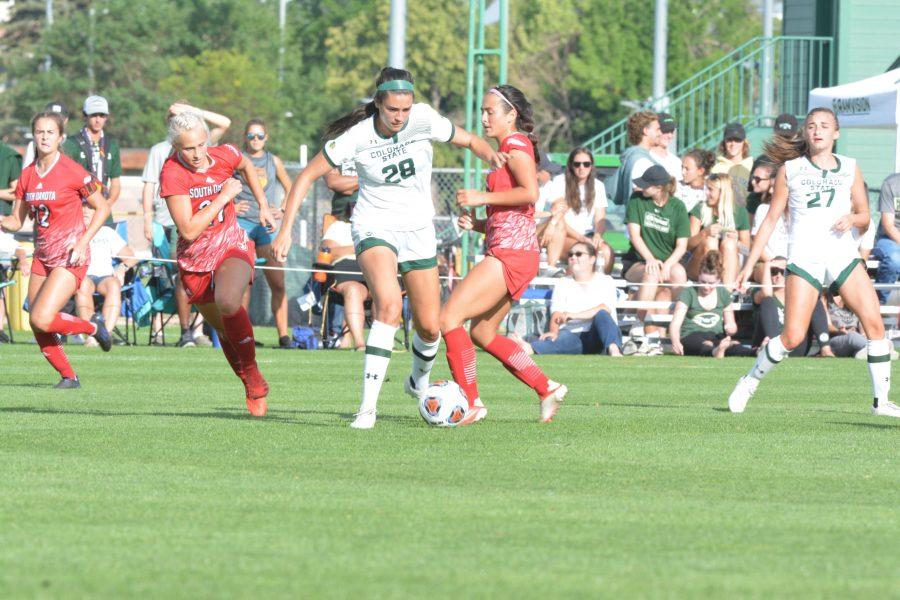 Senior forward Kristen Noonan dribbles between a set of South Dakota defenders in the Colorado State women's soccer match against South Dakota on Aug. 26. The Rams remained tied at 0-0 at the end of the match with the visiting Coyotes. (Gregory James | The Collegian)

This past week’s soccer games for the Colorado State Rams gave them a good starting point to launch from for the remainder of the season. On Thursday, the women’s team tied up their laces and played a tough game against the University of Northern Colorado Bears in Greeley, Colorado, at Jackson Stadium for a hard-hitting match ending in a 1-1 tie overall.

You want to get better every game, little by little. … This is preparing us for the conference.” -Keeley Hagen, head coach

The first goal, scored by senior Kristen Noonan, was an intense turnaround as the Rams gained turf by quickly moving to offense from defense. After Sophia Pearlman’s shot was blocked, team captain Baylee Bedard came in with an assist and tossed the ball up just in time for Noonan to score a header into the defenders’ goal. The Rams continued to hold the upper hand, controlling the ball for the majority of the first half of the game.

By the second half, the team amped up the shots, totaling eight shots on goal and 22 total for the game. By game end, the fight was felt by the Rams as they ended with 11 fouls. The Bears’ defense covered the firing well until scoring at the 84th minute with a header, tying up the match.

The game was sent into overtime, and by the second overtime, the Rams had two more shots by senior and forward Gracie Armstrong, who, unfortunately, shot just high of the post.

The UNC Bears had a comparative 12 total shots in the game with seven shots on goal.

On Sunday at noon, CSU took the field and played Kansas State University at CSU, ending in an upset of 4-0. The Kansas State Wildcats hit heavy early on, leading the first half 3-0, but were quickly apprehended as the Rams’ defense and offense ramped up and finished with 10 shots and four on goal.

Head coach Keeley Hagen feels confident in the team’s preparedness by the time conference season rolls around. Having made these mistakes early gives the team time to refocus and ensure success for future games.

“You want to get better every game, little by little,” Hagen said. “This is preparing us for the conference.”

There were some main errors made in the first half that the Wildcats capitalized on, but with coach Hagen and a strong roster, the girls should know what they are capable of on the field.

“I don’t think the scoreboard reflects how we played,” junior forward Caroline Lucas said. “In the first half, we possessed in our attacking half most of the time.”

Overall, the team’s outlook is positive for the remainder of the season. With a competitive schedule coming up, the women’s team will have an exciting unfolding.

Despite this loss, the girls will take on Idaho State University next Sunday at CSU, hopefully regrouping as a team and showing what the green and gold represents.

Paislee Fernau can be reached at sports@collegian.com or on Twitter @PaisleeFernau22.