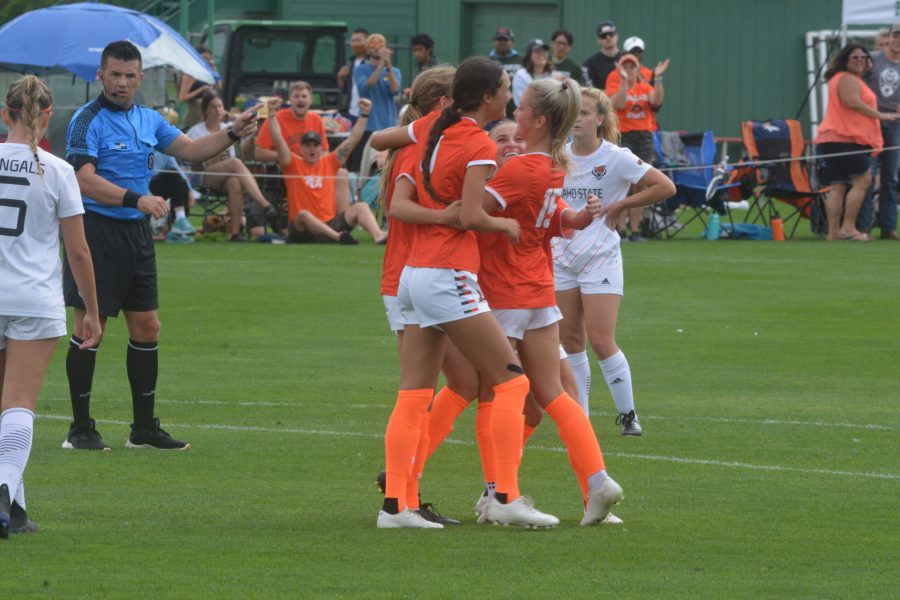 Members of the Colorado State women's soccer team huddle together for a celebration after forward Gracie Armstrong notched the Rams' third goal of the game Sept 12. The Rams went on to win 6-0 against the visiting Idaho State Bengals. (Gregory James | The Collegian)

After routing Idaho State University in the largest win in program history two weekends ago, the Colorado State women’s soccer team looked like their offense was primed to be one of the most devastating in the Mountain West Conference as they began conference play on Friday.

However, offensive struggles became the story of the weekend for the Rams as they suffered two 1-0 losses to San Diego State University and the University of New Mexico.

The first conference test for the Rams was Friday, when the Aztecs came to town. CSU had a reason to be optimistic, as SDSU struggled in their opening stretch of the season, coming to Fort Collins with an underwhelming 2-6 record. Not to mention their defense looked extremely porous in that same stretch, allowing 18 goals in their opening eight games.

It’s not easy to win; it’s not easy to score. That was a scrappy team that fought — they made us tougher, and that’s what we’re looking for.” -head coach Keeley Hagen

In the first half, both teams’ offenses looked evenly matched. SDSU had a faster start and kept CSU goalkeeper Amanda Green busy, forcing her to make two saves in the opening 18 minutes. The Rams had a few looks early on as well, but they were unable to direct them on target as efficiently as the Aztecs. CSU was only able to find the target twice from eight first-half shots, which never really tested the Aztecs’ keeper. The Rams’ defense looked solid, however, as they blocked three of SDSU’s shots in the first half.

The deadlock was broken minutes before halftime when a shot from Aztec forward Alexys Ocampo found its way into the back of the net at the 42-minute mark to make it 1-0 SDSU.

The second half was dismal for the Rams on the offensive side of the field as they only registered three shots, none of which found the target. Defense remained a strong point for CSU as they resisted the Aztecs’ 11 second-half shots, but the game ended 1-0 in favor of SDSU.

The Rams’ second game of the weekend was a chance for redemption against the University of New Mexico, but it was more of the same. The Lobos outshot the Rams 19-11 in the game, and the Rams couldn’t buy a goal.

The dire offensive situation for the Rams was perfectly encapsulated in their best chances of the game. Thirty minutes into the game, the Rams hit the inside of the post, and in the second half, Samantha Studt had a chance to equalize for the Rams when the ball came to her not five yards from the goal where she proceeded to somehow direct her shot just wide.

The defense held strong, but the mortal mistake that cost the Rams the game came in the 40th minute when a mishandled Lobos free kick found its way to Paige Satterlee, who capitalized to make it 1-0, which ended up being the final score of the game.

“It’s not easy to win; it’s not easy to score,” head coach Keeley Hagen said in a game recap. “That was a scrappy team that fought — they made us tougher, and that’s what we’re looking for.”

The Rams now sit at the bottom of the Mountain West Conference with a record of 1-4-2. It’s not the start to the conference portion of the season the Rams would have wanted, but there are still plenty of games to be played this season.

CSU will hit the road for their next matchup when they make the trip to Fresno, California, to take on Fresno State University Oct. 1.