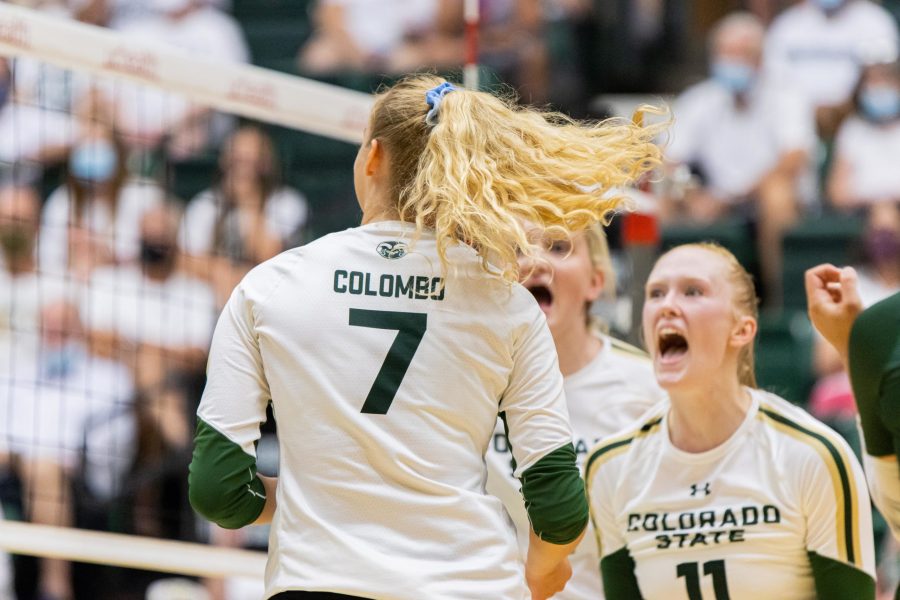 After nearly a year of waiting, the return of games with in-person attendance arrived at Moby Arena on Saturday for the annual whiteout volleyball game of the season. Despite a day delay, fans flocked to support the team as they faced Northwestern University.

Colorado State University Rams expected to take to the court Friday night to take on the University of South Dakota Coyotes, but due to COVID-19 concerns, the game was canceled.

As Moby filled with a sea of white, energy filled the court, delivering adrenaline from fans. The atmosphere motivated the players to give it their all, but the eventual outcome was likely not what the thousands in attendance hoped for. The Rams took a 3-1 loss with scores of 25-23, 21-25, 25-16 and 25-20. Regardless of the results, these athletes put up a fight and started off the season with a bang.

I think all of us still have a long way to go blocking, and that’s a big focus of our practice. We’re showing little improvements, and it’s different practicing blocking and playing a game and blocking.” -Sasha Colombo, CSU blocker

CSU sophomore and outside hitter Kennedy Stanford said she enjoys “playing with adrenaline. … That atmosphere and feeling all of that, it can’t be put into words. Last year, everyone wants to say we still brought energy, whatever. That is unrivaled. That is as good as it gets.”

Stanford not only felt the atmosphere but put it into her play, working hard in her team-high 12 attack points.

Regardless of the game’s outcome, the Rams had two sets with double-digit kills — the second and fourth, with 10 and 13 kills, respectively. Setter Ciera Pritchard finished with 28 assists. As the game escalated, the Rams offense got into a tangle. Northwestern Wildcat Temi Thomas-Ailara, who served eight aces against five errors, was responsible for some of the Rams’ back-row troubles. Ultimately, the Rams were ready to play but couldn’t pull through.

“I think all of us still have a long way to go blocking, and that’s a big focus of our practice,” senior CSU middle blocker Sasha Colombo said. “We’re showing little improvements, and it’s different practicing blocking and playing a game and blocking. They have a very fast, outside tempo ball, so it just comes to seeing that and trying to get used to that.”

As the Rams work past this loss, they look forward to battling University of Northern Colorado in Greeley, Colorado, this Tuesday. With a new mindset, structure and a bit of practice, the Rams are ready to dig for more.

Karsyn Lane can be reached at sports@collegian.com or on Twitter @KarsynLane1.