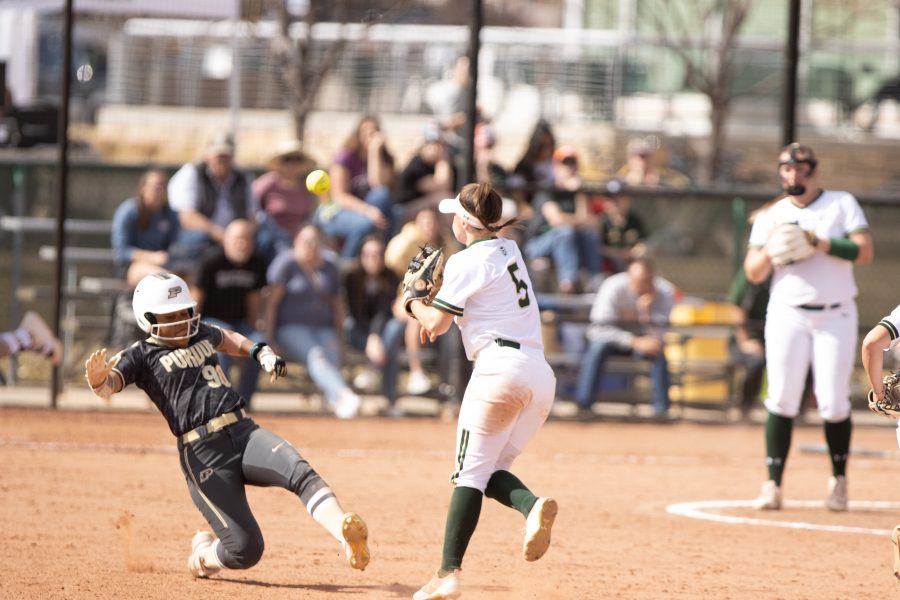 Haley Donaldson (5) gets an opponent out at second base and makes a throw to first, during the University's second home game vs Purdue University at the Colorado State Classic softball tournament on Mar. 8, 2020. CSU wins 4-3. (Devin Cornelius | Collegian)

The Colorado State softball team experienced a mixed bag of results in their doubleheader against Weber State University.

The Rams split the series due to two very different offensive performances.

A slow start and a slow finish can describe the Rams’ offense in game one. Both pitchers were shutting down the hitters as between the two teams there were only three combined hits in the first three innings.

The Rams were finally able to get on the scoreboard, for their only run of the game, at the top of the fourth. A bunt from Corina Gamboa put Peyton Allen across the plate. With 11 RBIs, Gamboa now leads the team in the category.

Ashlyn Visser responded with a lead-off triple for the Wildcats and put the pressure back on the Rams. Weber State was able to string together a couple more hits; the Wildcats were suddenly up 2-1 at the bottom of the fourth.

CSU went silent for the remainder of the game. WSU scored two more in the fifth off of a double from Mariah Ramirez. In addition to two RBIs, Ramirez pitched a complete game and did not allow an earned run on 109 pitches.

With just four hits on the game, there was plenty for the Rams to be worried about going into game two.

Whatever offensive woes plagued CSU in the first game were quickly put to the side at the start of the second game.

The Rams’ bats came alive early, as the Rams put up five runs in the first inning. Haley Donaldson, Danielle Serna and Tara Shadowen all hit doubles that drove in runners.

It is easy to score when there are runners on base, and the Rams had no shortage of that. The Rams tallied 13 total hits. Leaving runners on base is often a weak point for this team; however, on Saturday, they only stranded three runners.

The fifth inning was when CSU put their foot on the gas. Up 6-1, the Rams went station-to-station to increase the lead to 9-1. When things could not get much worse for WSU, Allen dug into the batter’s box, got a hitters count and knocked the ball out of the park for a three-run home run, increasing the lead to 12-1 and effectively ending the game.

CSU and WSU only played a five-inning game. Julia Cabral made sure the Rams would not have to use another arm and pitched a complete game, only allowing one unearned run. Cabral struck out six and allowed five hits and two walks on 82 pitches.

Other than an error in the bottom of the third, the Rams played flawlessly in their 12-2 route to close out the day and improve to an overall record of 8-10.