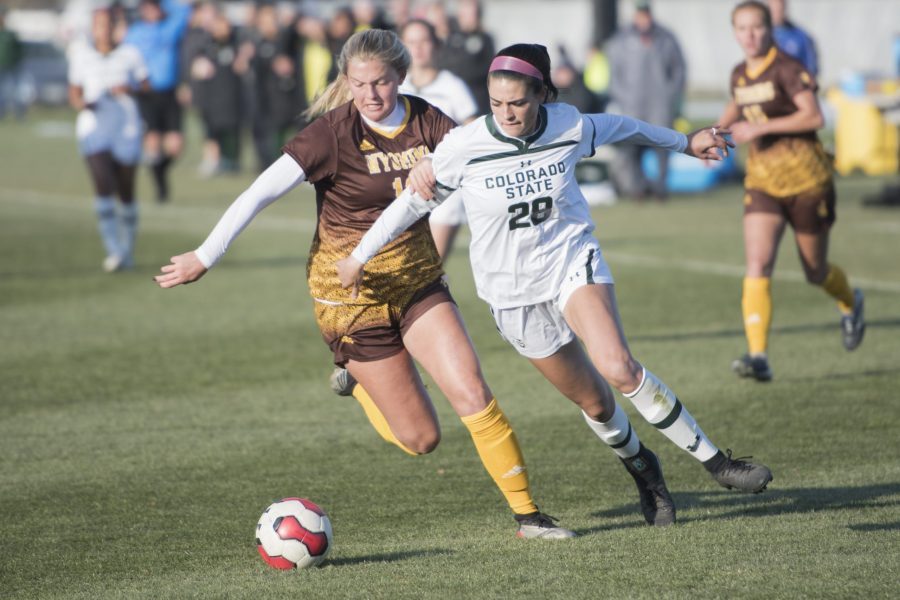 Sophomore forward Kristen Noonan dribbles past a defender in the second half. (Lucy Morantz | The Collegian)

It was an emotional Saturday afternoon for the Colorado State University soccer team as the Rams honored their senior players in the last home game of the season against the University of Wyoming Cowgirls. The Rams seniors didn’t get the optimal sendoff, however, as the Rams lost this one 3-0, putting them with a 2-2-1 record as they prepare to go into the final stretch of the season.

Wyoming’s substitute goalkeeper Alex Daws proved to be the most valuable player in securing the Cowgirls’ win as she produced seven saves in the second half to preserve the clean sheet and doom the Rams to a defeat.”

The Rams came out fast in the early stages of the game looking to get their first-ever win against the Cowgirls, but Colorado State just couldn’t provide the finishing touch to any of their efforts, even when they were presented with one-on-one opportunities.

Almost 12 minutes into the game, CSU winger Liv Layton surged into the Wyoming half and swung in a promising cross that struck the arm of Wyoming defender Keelie Wortmann in the penalty box, and the Rams were awarded a penalty kick.

Junior forward Gracie Armstrong stepped up to the spot hoping to score her fourth goal of the season, but the Cowgirls keeper Hannah Lee read the shot and was able to produce a save, diving to her right-hand side to deny the CSU captain and keep the game scoreless.

The rest of the first half was a deadlock, with CSU only registering two more shots on goal, both of which were easily dealt with by Lee. Wyoming looked static in their offensive play and only got off two shots in the first 45 minutes.

Unfortunately for the Rams, the Cowgirls wasted no time getting started in the second half.

Less than a minute into the second half, Wyoming midfielder Indianna Asimus was played in after some sloppy passing from the CSU defensive players and was able to slide her shot past Amelia Hammerle to put Wyoming on top 1-0.

Bad things just got worse for the Rams, as they would concede the second goal of the game just five minutes later. Wyoming strung together a few good passes to find themselves in the Rams’ half, and Nikayla Copenhaver beat a CSU defender with the dribble before curling an exquisite cross to find Jamie Tatum completely free in the middle of the box, Tatum took advantage and headed the ball into the goal to make it 2-0 in favor of Wyoming.

Tatum would go from scorer to providing the assist five minutes later via a free kick. Tatum launched a searching cross into the box, and Savannah Warner provided a perfectly directed header, sending the ball into the back of the net to secure the 3-0 scoreline for Wyoming.

CSU threw everything they had forward to get back in the game, registering 10 shots in the second half, with seven of those shots finding the target. Wyoming’s substitute goalkeeper, Alex Daws, proved to be the most valuable player in securing the Cowgirls’ win, as she produced seven saves in the second half to preserve the clean sheet and doom the Rams to a defeat.

Colorado State will look to leave this loss in the rearview mirror as they travel to Logan, Utah, to take on Utah State University on Friday before ending their regular season on Saturday in Albuquerque, New Mexico, with a tough matchup against the University of New Mexico, the current division leaders.