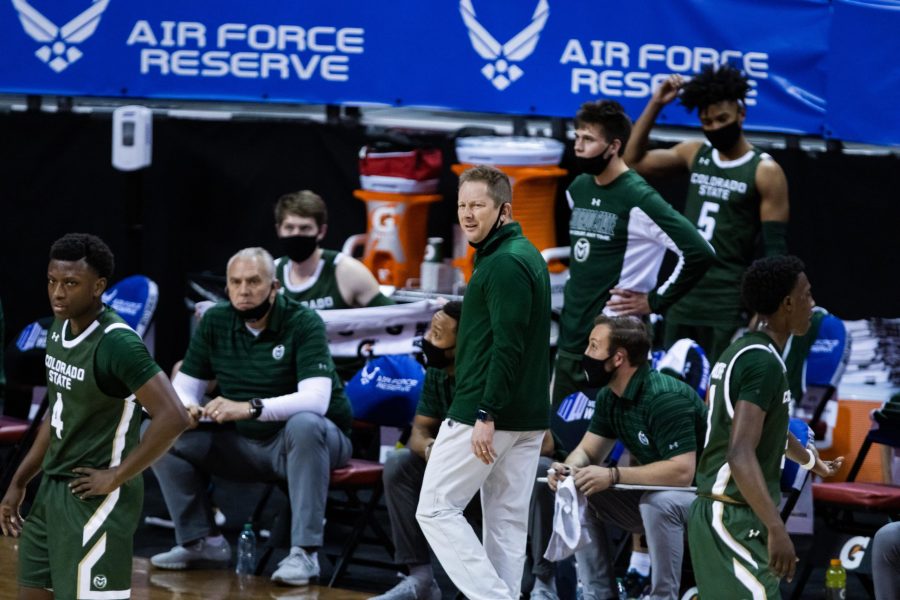 Isaiah Stevens (4) and Niko Medved are disappointed with a call from the referees, during the Air Force Reserve Mountain West men's basketball tournament in Las Vegas. The University lost the game 62-50. (Devin Cornelius | The Collegian)

LAS VEGAS — With just over 10 minutes left in the game, David Roddy found himself with an open lane to the basket and turned the corner in anticipation of two easy points. But this time, instead of going up for a two-hand slam, Roddy fumbled the ball in transition and sent it bouncing out of bounds.

It was an uncharacteristic blunder by Roddy that was a microcosmic representation of the Colorado State men’s basketball semifinal game against Utah State University. Tournament title hopes dashed, the Rams would get knocked out of the Air Force Reserve Mountain West Men’s Basketball Championship tournament after falling to the Aggies 62-50.

Neemias Queta was the sole protector of the rim and Colorado State paid viciously for it. The Mountain West’s  Defensive Player of the Year totaled nine blocks on top of an already dominant 18 points and 14 rebounds.

“Queta just completely changed the game,” said Niko Medved, the head coach for the Rams. The center’s presence in the paint, especially in this game, was a stark reminder of just how much of a benefit size can be in college basketball.

Despite this, the Rams actually outscored the Aggies in the paint 26-20. However, this number could have been far higher had the green and gold been able to convert more than eight of their 32 attempted layups. Numerous scoring droughts plagued CSU throughout the contest, but going the last four minutes of the game without a point certainly hurt them the most.

Utah State was in the midst of a dry spell as well and would not score from anywhere other than the charity stripe during the last 9:30 of the game. Whatever offense Utah State lacked down the stretch they either made up for defensively or got bailed out by the Rams’ lack of execution — oftentimes it was both.

For much of the game, the Rams were forced to play on the perimeter and rely on their sharp shooting capabilities. But the spray of a shotgun would be a far more relevant descriptor, as the Rams seemed to be able to hit everything except for the bottom of the net. As a team, CSU would finish the night shooting 25.4% from the field and a horrific 15.8% from deep.

Colorado State has routinely been a team that prides itself on its 3-point shooting prowess, and although this outing was likely an anomaly, it was a concerning occurrence in such an important game.

“The ball just didn’t go in the basket,” Isaiah Stevens said in the post-game press conference. “We got some looks that we’ll take every single night, and they just didn’t fall our way tonight.”

Stevens was a bright spot in the limited offensive output the Rams saw. The sophomore finished with a team-high 15 points and a team-second seven rebounds.

Despite the failure to convert possessions into points, the Rams did fix a recent problem — turnovers. CSU totaled just six turnovers in the entire game. The Aggies meandered their way into double-digit turnovers, but it failed to hold any relevance as again CSU failed to capitalize when given the opportunity.

This game held extreme significance for the Rams’ ability to potentially get a bid to play in March Madness. With this loss, the Rams will find themselves teetering on the fringe of an at-large bid. For CSU fans and players alike, the time between now and selection Sunday is sure to move unbearably slow, but regardless of what the final verdict is, this team will certainly be searching for its next shot.

Editor’s Note: This article was updated to include more information.