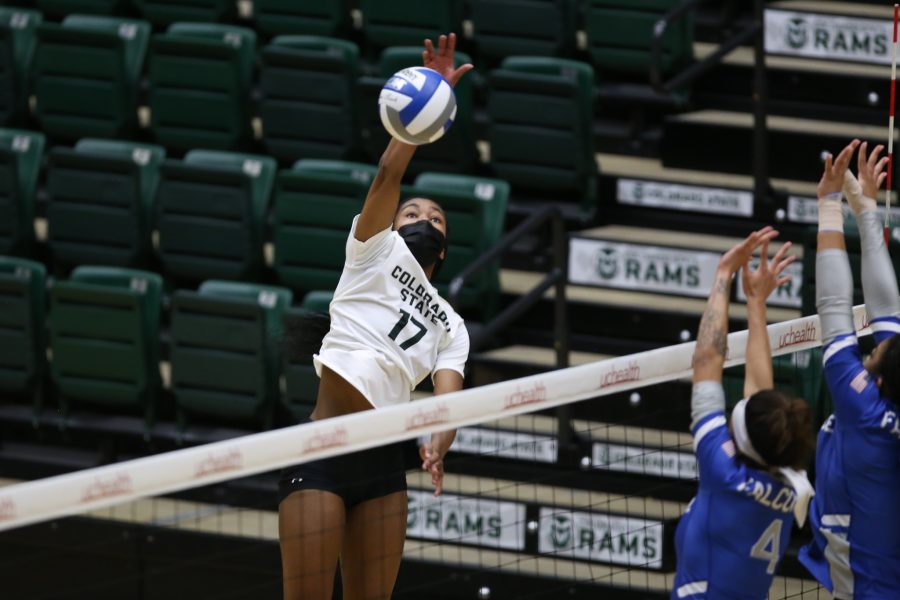 Although no fans were in attendance, both teams came out with an intensity that matched a packed arena. San José scored the first point, but that was the only lead the Spartans held in set one despite tying the game multiple times.

After four straight powerful strikes from Breana Runnels, CSU pulled ahead to lead 18-12. The Spartans stayed competitive late in the set, but the Rams closed it out and won the set 25-23.

Set two was filled with offensive streaks as the Rams and Spartans traded runs throughout the game. The Rams took a 5-0 lead early on, but the Spartans responded with a six-point run to retake the lead.

Both teams went back and forth until the Spartans went on a five-point streak, with three being serving aces, to gain the lead 14-13. Kennedy Stanford briefly halted San Jose with a kill, only for the Spartans to bounce back with another six-point streak late in the set.

With victory getting closer for the Spartans, the Rams battled back with a series of kills from Runnels and Jacqi Van Liefde to bring the game within two. Stanford and Karina Leber closed out the game, contributing three straight kills for the Rams, which sealed the win at 26-24.

Set three saw a tight contest in which neither team would take a lead larger than three points.

Freshman Barrett Power subbed in for Ciera Zimmerman after a tough fall from the redshirt sophomore kept her out of the rest of the game. Losing Zimmerman late in the match did not stop the Rams. The green and gold remained stalwart and completed the sweep after taking the last set 25-22. Runnels and Stanford ended the night 17 and 15 kills, respectively.

Set one of Saturday’s matchup looked very similar to Friday’s, as both the Rams and Spartans stayed fairly close. The Rams took set one 25-21 and looked to be gearing up for another three-set win.

We looked for the sweep at San Jose State, but came up short in a five setter. We’re back home against Fresno State next weekend! #PointRams

However, set two was not the same for the Rams when the Spartans went on a four-point streak early on to take the lead 6-2. CSU spent the rest of the set attempting to battle back, but the Spartans refused to relinquish the lead. The Rams scored just seven more points and lost set two 13-25.

Set three saw more of the same as CSU struggled to get back in the game after an early Spartan lead.  The Rams found themselves on the wrong side of a 2-1 deficit after losing set three 25-16.

Starting the fourth set with a 3-0 lead, CSU needed to keep their offense hot if they were to make this game go the distance. The Spartans clawed their way back into the set and tied it late at 19 all.

The Rams finished the set with a four-point run to win 25-22 and force the game to a fifth set. This was the first five-set match of the season for CSU.

The Spartans took an early lead at 4-1 and kept it for the remainder of the fifth set. The Rams could not crack the Spartan lead and fell 15-11 in the final set of the series.

Runnels and Stanford hit double digits again with 17 and 14 kills, respectively, to finish the night. With no return of Zimmerman on Saturday, Power stepped up and recorded her first career double-double with 42 assists and 10 digs.

The Rams will play their next series against California State University, Fresno as they take on the fourth-place Bulldogs at Moby Arena.