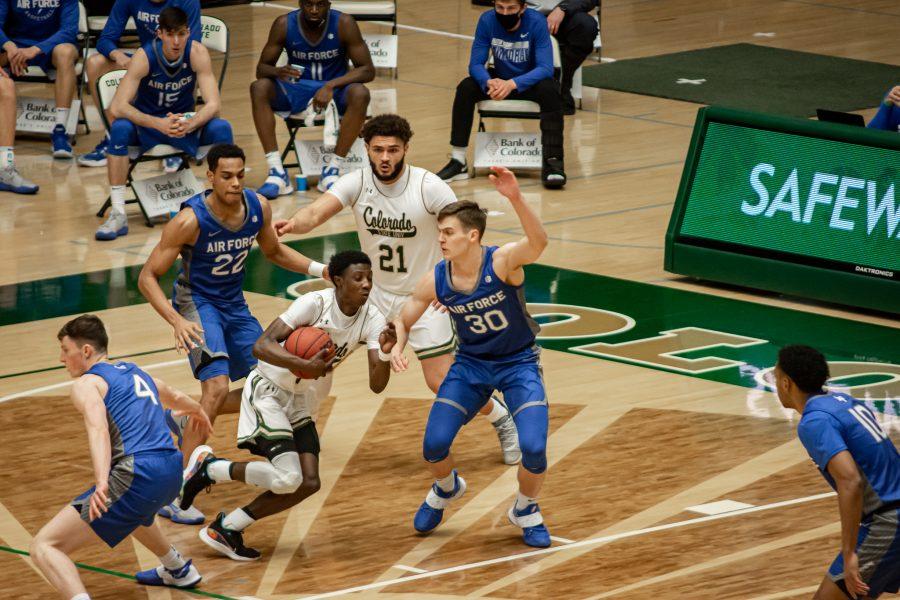 Kendle Moore (3) rushes past the defenders during the University's basketball game vs Air Force, Feb. 27. CSU takes the win 72-49. (Tri Duong | The Collegian)

A broken broadcast stream and a five-minute and 28-second scoring drought kicked off the first game back in three weeks for the Colorado State men’s basketball team. Luckily for them, the United States Air Force Academy failed to capitalize on the rust the Rams showed early.

The Rams started 0-7 from the field, with all attempted shots being missed 3-pointers. The offense came up with just 28 points in the first half, a far cry from the normally explosive Rams.

“Our coaches preach all the time: love the paint; like the three,” Isaiah Stevens said in the post-game press conference. Stevens’ words rang true for the Rams in the second half as they reeled back their ambition from behind the arc.

Shooting nine 3-pointers in the second half compared to the 13 that were thrown up in the first, the strong inside offense of the Rams began to rear its head. Behind David Roddy’s 15 second-half points, the Rams snapped out of their funk and took game one 72-49.

The Rams look like the real deal after three consecutive dominant wins. CSU will play the University of Nevada, Reno on Friday in their last regular-season game before the Mountain West Conference tournament.”

Game two of the Air Force series reeked of déjà vu. The early game misfires that plagued CSU in the first matchup against Air Force were very much prevalent in game number two.

The Rams simply couldn’t shoot. They were 2-18 from deep in a closely contested first half. The green and gold were able to get back on track by driving and scoring in the paint, a clear return to the antidote to their problems seen in game one. CSU pulled away big in the second half by playing efficient ball in route to a 74-44 win.

CSU never really fixed their shooting woes — they finished 5-28 from three — but their ability to halt the Air Force offense was very evident. Despite their time off, they were still dialed on the defensive side against the Falcons. The Rams forced multiple shot-clock violations, and there were numerous possessions in which Air Force was forced to chuck up a low percentage shot at the buzzer.

On top of the team playing great defense on the majority of their opponent’s possessions, there were plenty of times CSU stole the ball, which ignited their fast-break skills. James Moors had an impressive steal and the big man ran down the court before being fouled on his fast-break attempt. Kendle Moore continued to display he can take on any defensive assignment. Moore takes his matchups personally and locks down his assignments.

The Rams were also able to fix the turnover problem they’ve had recently. CSU is averaging 14.3 turnovers a game, and Air Force is known for their pesky defense. The Rams thwarted that threat and improved upon their own numbers by only committing 11 turnovers.

The thing that stuck out most in this performance was the love this team has for each other. Everyone has each other’s backs and wants to see one another thrive, and this is a trait that makes CSU special. This was highlighted when Jacob Jennissen saw his first action of the season. The freshman, who is recovered from an ACL injury, scored his first career bucket and his teammates went wild.

After dominating their series against the Falcons, CSU had another rescheduled fixture to divert their focus to: a date with last-place University of New Mexico at home on Wednesday, March 3.

The Rams picked up right where they left off in their series against Air Force and poured it in on the Lobos in the first half. The team collectively shot an impressive 21-29 from the field in the first 20 minutes to take a 47-31 lead into the locker room. Adam Thistlewood was the standout player for the Rams early on, as he posted 17 points before halftime.

CSU was playing to their strengths and, in typical Rams fashion, were electric from behind the arc in large part to Thistlewood and Moore. The duo combined for five threes in the first half.

It was a lot of the same for CSU in the second half, and the Lobos had no answer. The Rams put it in cruise control on the way to an 87-73 win. Thistlewood continued to be the hot hand for the Rams and finished the night with 27 points off of 11-13 shooting. Roddy also had a huge hand in the dominant victory and was one assist shy of recording the first triple-double in the history of men’s basketball at CSU with a final stat line of 12 points, 14 rebounds and nine assists.

The Rams look like the real deal after three consecutive dominant wins. CSU will play the University of Nevada, Reno on Friday in their last regular-season game before the Mountain West Conference tournament.

Bailey Bassett and Bailey Shepherd can be reached at sports@collegian.com or on Twitter @baileybassett_ and @B_Sheps.