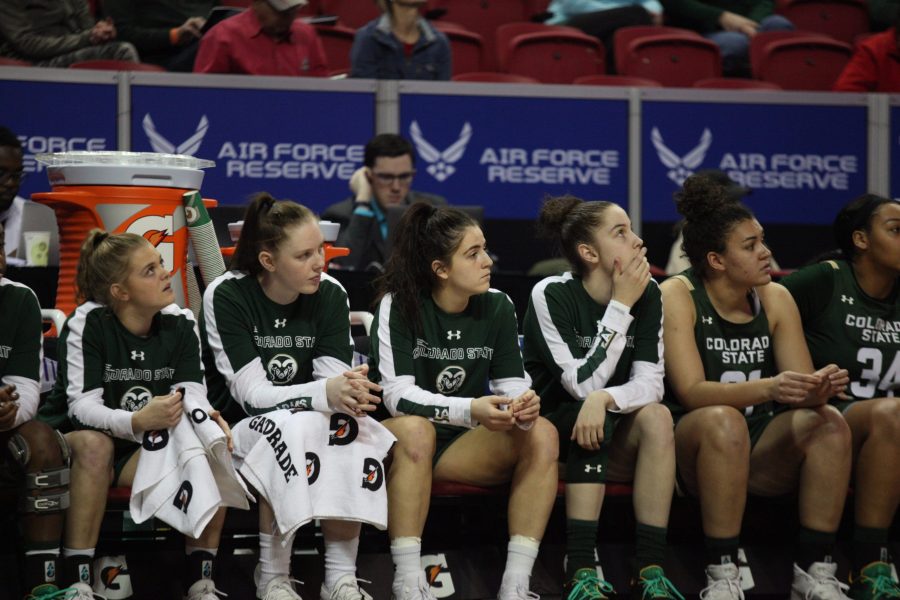 The Colorado State Rams watch their teammates play the United States Air Force Academy March 1, 2020. Despite an encouraging second half, the Rams lost to the Falcons 60-48. (Ryan Schmidt | The Collegian)

A commanding win and a humbling loss were the results of the Colorado State University women’s basketball two-game series against the United States Air Force Academy.

After a three-week hiatus from play, the Rams finally stepped back onto the court last weekend and dominated their first game. At the half, the Rams had a commanding 13-point lead, but it was the third quarter when the Rams really put their foot on the gas, outscoring the Falcons 22-10. Going into the fourth quarter, the green and gold had a 59-34 lead.

CSU had four players score double-digit points. Tori Williams and Karly Murphy led the offense with 12 points each, followed by McKenna Hofschild’s 11 points and Jamie Bonnarens’ 10 points. Murphy was a force to be reckoned with on the physical side as well, grabbing a team-high 10 rebounds with six of those being offensive boards. Williams was one rebound away from joining Murphy with a double-double.

Playing a rescheduled series against the University of New Mexico, the two top teams in the standings will be pitted against each other in the final hours of the regular season.”

The Rams had no issues getting back up to game speed after their long break. Ryun Williams’ squad cruised to a 72-48 victory and upped their win streak to eight games.

Game two proved to be far tighter of an offensive contest between the two teams. Murphy continued to be dominant in the two-game series, finishing Monday’s game with 19 points and nine rebounds – one rebound away from consecutive double-doubles.

Tori Williams and Hofschild finished the game with 15 points each, and Ellie Boni scored 10 points, giving the Rams four scorers in double-digits.

At the half, AFA was leading CSU 37-30, but the Rams refused to roll over and quit. The Rams went on a 7-0 run to close out quarter three and make the game competitive. However, with the Rams fighting through adversity and cutting the lead down to a one-possession game five times in the last quarter, the Falcons kept their eyes on the finish line and never let up. The Rams lost 75-68 after winning by 24 the previous game.

“We knew there would be more resistance and more pressure, but we did not handle it well,” Ryun Williams said in a game recap on the CSU athletics website. “It put us on our heels. That is how Air Force plays, and we did not match it well today. In the second half, we played with a more aggressive mentality, but it was too late. “

The Rams will have one final test before starting their campaign in the Mountain West Conference tournament. Playing a rescheduled series against the University of New Mexico, the two top teams in the standings will be pitted against each other in the final hours of the regular season. Not only will the Rams get a look at arguably their strongest competition, but this series could potentially shake up the seeding for the tournament.

If the Rams sweep the Lobos, they will solidify themselves as the No. 1 seed going into the tournament. However, if the Rams are on the receiving side of two losses, they would fall to the No. 2 or No. 3 seed and would see a significantly harder path to the finals.

It is rare you get late-season matchups of this caliber, and this series should prove to be an exciting one.

The veteran leadership on the team will be key as the Rams look to play deep into the postseason. CSU honored their seniors on social media earlier this week as a substitute for the traditional senior night game.

Senior Night looks a little different this year but we still want to honor these four for their dedication to our program.#ProudToBe | #CSURams pic.twitter.com/QtPcd4Kkkj

Bonnarens averages the sixth-most points per game on the team and is third on the Rams for made 3-pointers with 23. A consistent threat from deep, Bonnarens leads the Rams in 3-point shooting percentage among shooters with more than ten attempts beyond the arc.

Lauren Brocke and Liah Davis were celebrated this week as well. While neither Brocke nor Davis have stepped on the court much, they have both benefited the team in ways that do not make it onto the box score. Ryun Williams praises Brocke as being the best scout player. Davis is a second-leading returner in rebounds and was the only returning center from the previous season.

Lore Devos will also be celebrated on senior night. Devos leads the Rams in field goals made. On the defensive side, Devos has the most rebounds and blocks on the team.