Rams burst back onto the scene to start outdoor season 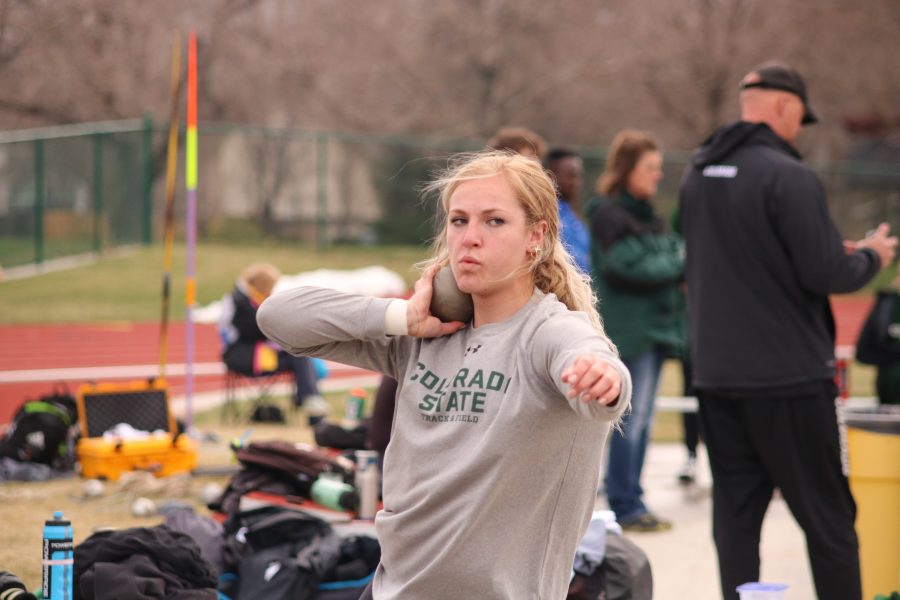 Tarynn Sieg winds up to throw the shot put ball, at the Doug Max invitational. Sieg placed first in the event with a distance of 14.96m. (Devin Cornelius | Collegian)

The Rams will now look to this coming weekend for their first home outdoor meet since the Jack Christiansen Invitational on April 27, 2019.”

After last year’s outdoor season was canceled, the first meet of this season was highly anticipated by student-athletes who had been itching to compete, and their performances put that hunger on display. According to the recap of the meet posted on the CSU Athletics website, over 30 student-athletes made their outdoor season debut for the Rams. With a large playing field comes even larger results, and the Rams certainly delivered as there were 16 new names in the top 20 CSU all-time record lists.

Janyah Jasper, a freshman from Dallas, continued her impressive first-year run in the green and gold. With a time of 11.78 in the women’s 100-meter, Jasper took the ninth-best time in the event in CSU’s history. Sophomore Bailee Carr also found herself occupying a top 10 position by the day’s end. Carr finished her 800-meter outdoor debut with a time of 2:10.53, which gives her CSU’s tenth-best time for the event.

The men’s sprinters were equally impressive on the day. Liam Mather finished second in the men’s 110-meter hurdles with a time of 14.13 for a new personal record. Mather is now tied for the sixth-best time in the event in the CSU record books. Germain Barnes and Drew Thompson also tied or set new personal records in the same event, placing fourth and 17th, respectively.

The men’s 400-meter event saw two outdoor debuts and two new names on the CSU record list. Taking first and second in the event, Tom Willems and DeVon Washington now have the 10th and 14th best times for the men’s 400-meter in CSU history with 47.39 and 47.53, respectively.

All throwing cohorts for the green and gold also had impressive outings. First, second and third place honors were taken by the Rams in the women’s shot put and discus events. Tarynn Sieg reestablished her dominant throwing tendencies to win the shot put with a throw of 53’0″, but it was freshman Gabi McDonald that burst onto the scene with her second-place finish. In her outdoor debut, McDonald’s 51’11.25″ toss launched her to the seventh best throw in CSU history. McDonald also won the women’s discus with a throw of 166’5″, putting her at 18th all-time for the event in the CSU record books.

On the men’s side, redshirt junior Jackson Morris took first in the javelin with a throw of 214’9″, despite not breaking any CSU or individual records.

The Rams will now look to this coming weekend for their first home outdoor meet since the Jack Christiansen Invitational on April 27, 2019.

Named after the legendary CSU hurdler and now former head coach of the track and field program, the Doug Max Invitational will take place in Fort Collins at the Jack Christiansen Memorial Track.