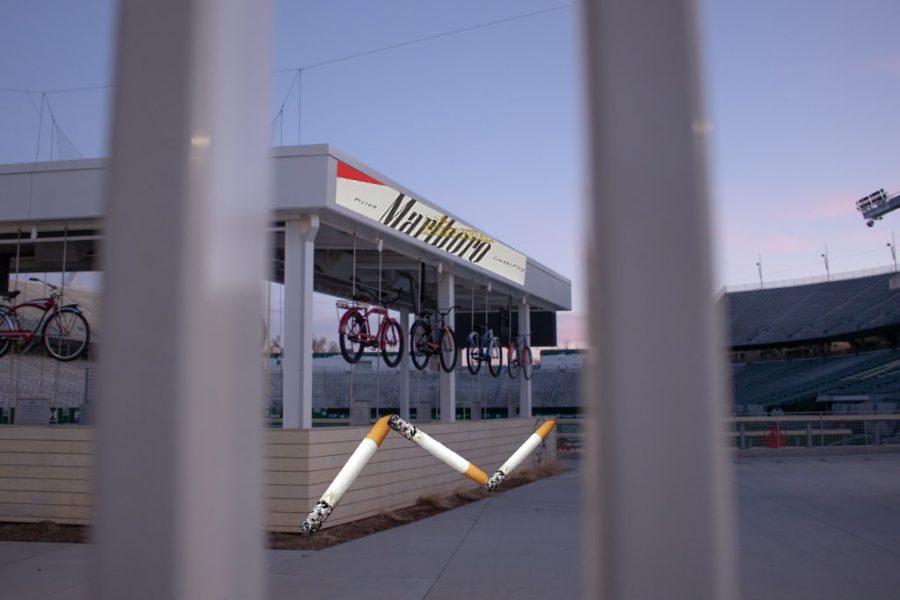 The Newly added Marlboro Mezzanine in Canvas Stadium March 29. In an effort to promote healthier alternatives to vaping, The Athletics department has decided to drop the New Belgium partnership in favor of a partnership with Marlboro Cigarettes. In a statement, Marlboro President of Operations, Bronc Chitis said "We are looking forward to our partnership with CSU and hope this partnership will not fail for a lung lung time" (Grandiose Frames | The Unprecedented Times)

The decision has yet to be made public, but a close insider to the University detailed the proposed change.

“CSU has been trying really hard to keep students safe during COVID-19, but sometimes it is out of their hands,” the source said. “Students continue to share (vape pens) and drinks and ultimately fail to take it seriously.”

Realizing the issue is not the COVID-19 platypus but the larger health concern of vaping and drinking, CSU hopes this sponsorship change will help to point its population in the right direction.

CSU reportedly thinks the decision will help the student body, as well as the athletes, cut down on vaping specifically.

“The vaping epidemic is prominent in college and especially at CSU,” the source said. “In a meeting with CSU officials, they were all trying to come up with a way to pitch a healthy alternative to students and athletes. That’s when they came up with the idea to pick Marlboro Cigarettes as a sponsor.”

CSU deemed other sponsors “too valuable to lose,” which is why the University has dropped New Belgium. The University believes if students can see the athletes, stadiums and arenas covered with Marlboro, they will understand the message and drop the vape.

“Look, we are not idiots here,” a CSU representative said. “We are aware of how dangerous smoking can be to young adults. But the thing we don’t know is how dangerous vaping will be in the future. Who knows? Maybe it will be 10 times worse. College kids are going to find some source of nicotine, so why don’t we promote what we know?”

“We were thinking of doing something no one else does,” the Canvas design team said. “People love cigar lounges, so why not make a cigarette lounge? Instead of purchasing a beer, you’ll buy a pack of cigarettes to enjoy while watching the Rams play.”

The drunken haze that plagued the attendees of football games will now be replaced by the more responsible haze of cigarette smoke.

Moby Arena will allow smoking in all parts of the arena until the fourth quarter. When asked about visibility concerns for players, the CSU representative said, “That’s just something the players will have to deal with.”

The sponsorship with be announced in the coming weeks. CSU also plans to release specially designed packs of Marlboro Lights with a golden Ram on the front.

“We are extremely happy with the decision,” the representative said. “I think many schools will follow behind us. In 20 years, this move will either be reflected on as the best decision or the worst. Sometimes you just have to go with your gut feeling, and my gut is feeling for some Marlboro Lights and an iced coffee.”

The Unprecedented Times reporter Cliff “Red Apple” Booth can be reached at sports@collegian.com or on Twitter @TMeguire.