Cowboys, Rebels and Bulldogs move on to men’s quarterfinals 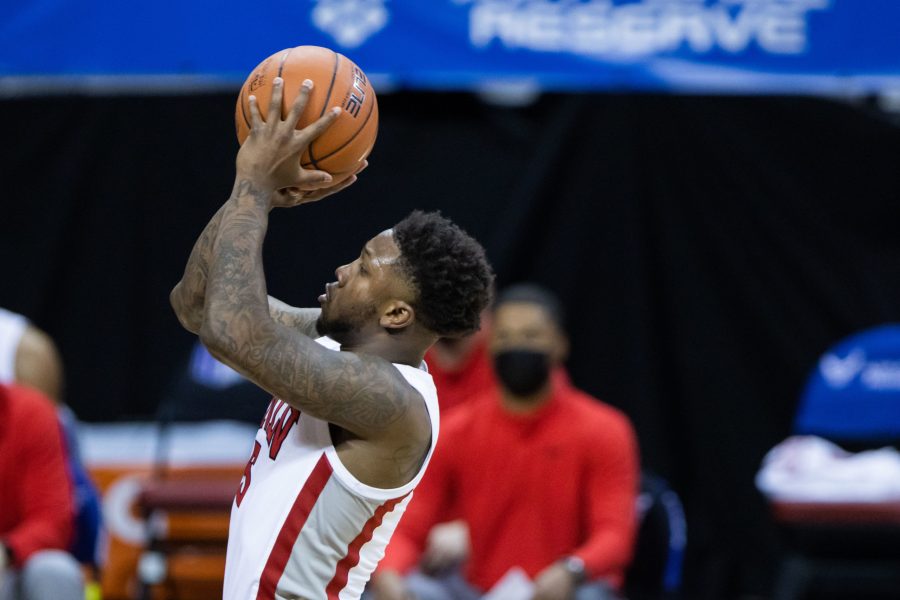 No. 8 University of Wyoming versus No. 9 San José State University

The University of Wyoming started things off guns-a-blazing as they destroyed San José State University in blowout fashion with a score of 111-80. The 111 points scored by the Cowboys is the highest regulation total in Mountain West Conference tournament history. The Pokes are a team that lives and dies by the 3-pointer, and they certainly benefited from it today, knocking in 6-14 from deep in the first half.

Xavier DuSell helped ignite Wyoming’s fiery offense as he started off 5-5 from three and would finish with 19 points. Graham Ike also had a career night. The freshman dropped a career-high 32 points. Wyoming outhustled, outdefended and overall outplayed SJSU by a sizable margin. Wyoming will need to continue that type of play if they are to beat top seed San Diego State University tomorrow in the quarterfinals.

No. 7 University of Nevada, Las Vegas versus No. 10 United States Air Force Academy

Game number two between the University of Nevada, Las Vegas and the United States Air Force Academy was a similar display of domination that saw the Rebels win 80-52. The Rebels had three players hover around the 20 point mark. David Jenkins Jr. had 21 points while Bryce Hamilton and Cheikh Mbacke Diong added 18 and 16 points, respectively. UNLV took complete control of the interior game, reeling in 38 total rebounds compared to Air Force’s 17. But the story of the night was UNLV’s prowess from deep. The Rebels shot 52.9% from beyond the arc which proved to be the difference-maker over the Falcon’s measly 11.1%.

No. 6 California State University, Fresno versus No. 11 University of New Mexico

California State University, Fresno, survived an 85-77 battle against the University of New Mexico despite a poor performance from their star player, Orlando Robinson. The forward only played 10 first-half minutes due to a trio of personal fouls in the half. Robinson looked better in the second half and would finish the game with a double-double. However, for the majority of the game, Fresno State relied on guards Deon Stroud, Isaiah Hill and Anthony Holland who provided the bulk of offensive production with 19, 17 and 15 points, respectively.

With the Bulldog win, Colorado State University now has its first opponent lined up. A bounce back game should be expected from Robinson, and all eyes will be on CSU center James Moors for defensive duties.

The Rams and Bulldogs will face off in the last quarterfinal of the night on March 11 at 8:30 p.m. PST.