Aztecs, Wolf Pack and Aggies move on to semifinals 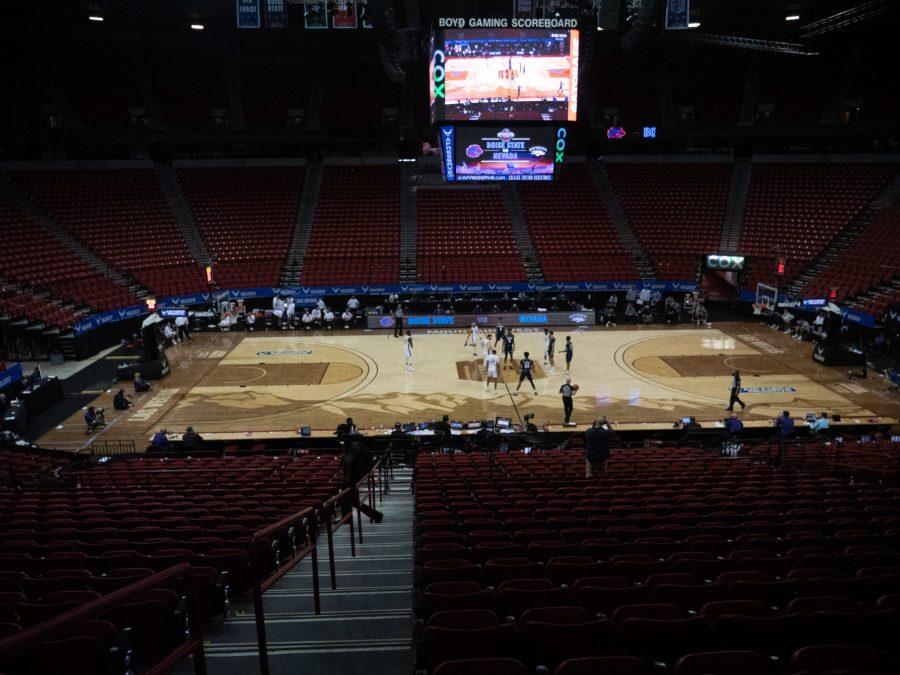 The Thomas and Mack Center at the University of Nevada, Las Vegas during the Air Force Reserve Mountain West Tournament March 11. (Devin Cornelius | The Collegian)

LAS VEGAS — Colorado State fans had another late night ahead of them after drawing the late card on quarterfinal day for the Air Force Reserve Mountain West Men’s Basketball Championship. But prior to a late Ram tipoff, the rest of the Mountain West got to work deciding who would move on to the semifinals and who would spend the rest of the year on the couch.

The University of Wyoming’s March marvels have come to an end and it may be due to an unintentionally successful shot. San Diego State University won 69-66 in a game that came down to the wire. Wyoming guard Marcus Williams had a chance to put Wyoming in a position to take the lead after getting fouled with five seconds left in the game, but Williams accidentally made the second free throw. Wyoming hoped to get the rebound and then tie the game but the successful conversion gave the top-seeded Aztecs the ball back. Wyoming certainly ruffled the feathers of the #1 seed and proved to the rest of the conference that the winner of this tournament is far from determined.

The University of Nevada, Reno jumped to an early lead in the second quarterfinal of the day and never looked back. Behind Desmond Cambridge Jr.’s dominant 31 point night and an equally impressive 26 from Grant Sherfield, the Wolf Pack would send Boise State University packing. The Broncos didn’t even play horrible — they shot 51% on the night — but they were unable to get any type of consistent offensive flow throughout the game and could never really hurdle a seven-point deficit. Winning 89-82, Nevada firmly established themselves as the Bronco slayer after beating them three times on the season.

No. 2 Utah State University versus No. 7 University of Nevada, Las Vegas

Utah State University dominated the University of Nevada, Las Vegas in the third quarterfinal of the day, winning 74-53.  Initially, this game moved at a snail’s pace as offenses ran stagnant in the first half, but from a competitive standpoint, it was as tight as they come, as the game was tied at 24 points apiece going into the second half. Utah State made the executive decision to live up to their designation as #2 seed and quickly distanced themselves from the Rebels. Aggie center Neemias Queta would total his seventh double-double in a row. The Aggies’ ability to share the ball shone in the second half. Utah State would turn five first-half assists into a team total of 18 and would put up an impressive 50 points in the second half. The Aggies are certainly gearing up to make another deep run in the tournament and potentially retain their tournament title.

Bailey Bassett and Scott Nies can be reached at sports@collegian.com or on Twitter @baileybassett_ and @scott_nies98.