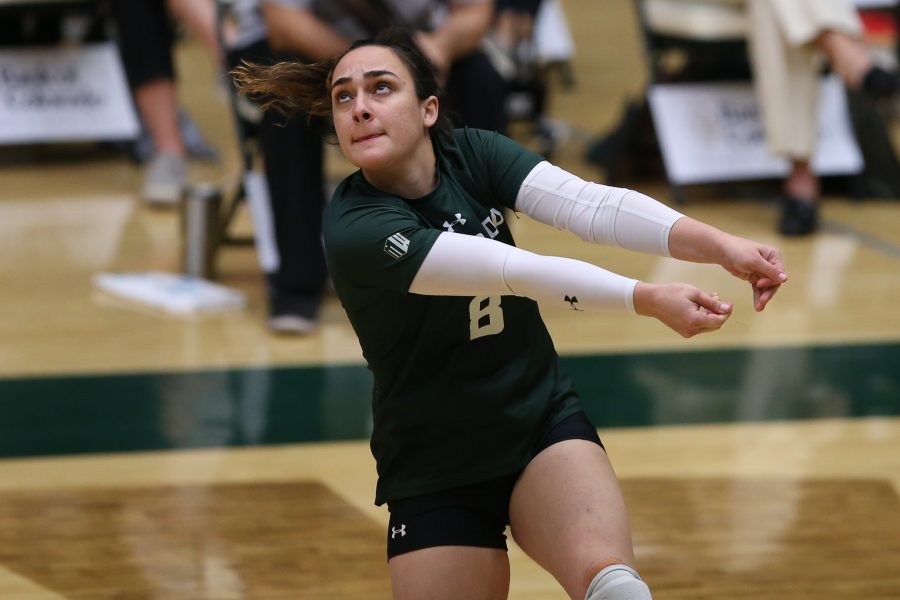 Alexa Roumeliotis (8) follows through after passing the ball to the setter. (Luke Bourland | The Collegian)

The Colorado State University volleyball team won just one set in their two-game series against the University of Nevada, Las Vegas last week.

Both the Rams and Rebels came into this matchup on two-game win streaks, but it would be the Rebels that would continue their streak after taking game one of the series 3-0. The Rams again dropped the first set of the game despite leading 8-2 early in the set. The Rebels would win the first set 32-30 in heartbreaking fashion after the Rams hung tight and continued to force the set to extra points. UNLV would win set two 25-17 and set three 25-20 en route to their game one sweep of CSU.

Alexa Roumeliotis set a program record with 36 digs against UNLV this afternoon! #PointRams

The teams returned to Moby Arena for game two of the series two days later. CSU got off to a slow start in set one as they quickly found themselves down 5-10. This time, it was the Rams’ turn to mount a comeback behind the hot hand of senior Alexa Roumeliotis who would bring the game to 12-12 after three aces. The set continued to go back and forth but the Rams would hang on to win the first set 25-23.

Unfortunately, the Rams could not sustain their winning ways. CSU lost their next three sets to the Rebels. Their loss was not without multiple chances as the Rams were leading 12-8 in the fourth set, but after a five-point run in UNLV’s favor, the Rams wouldn’t see another lead. CSU would lose the fourth and final set 20-25.

Roumeliotis, a bright spot in the disappointing series, ended Thursday’s match with a season-high 21 digs. She proceeded to demolish that number in Saturday’s game and set a program record of 36 digs throughout the four-set match. The senior also had five service aces, getting her to tie for fourth all-time for aces in a four-set match.

Runnels contributed a notable 14 kills on Saturday, ending the series with 25 total. Overall the Rams ended the series looking good from the stat book but failed to bring it all together for a win.

With their next contest not until Feb. 26 against the University of Wyoming, the Rams will have a couple of days to regroup and get ready for the contest. The Cowgirls recently got swept by Boise State University in their most recent series, making this a series both teams will look to as a way to snap their losing streaks.

You can listen to a broadcast of the game at kcsufm.com.