Basketball and softball lose week’s worth of competition 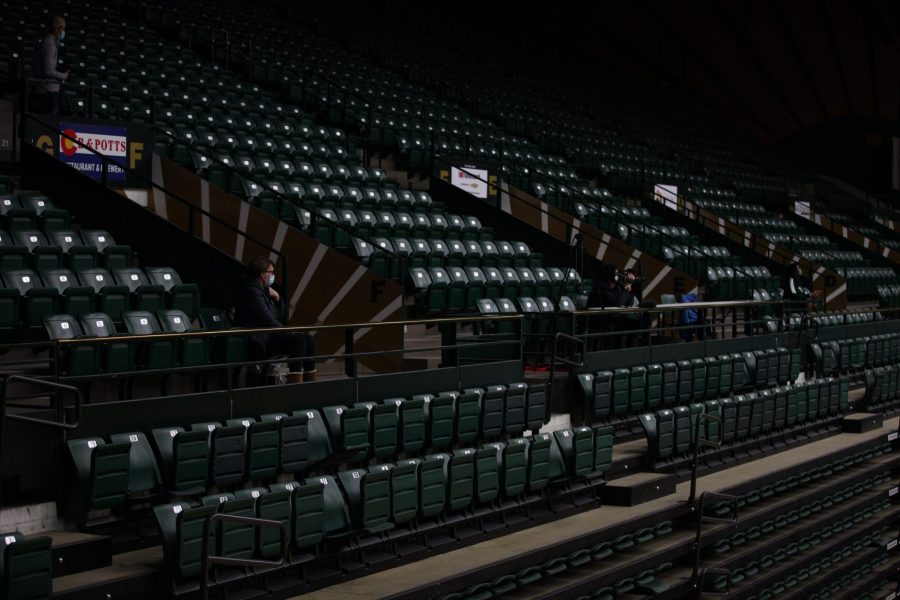 A nearly empty Moby Arena due to COVID-19 precautions during a women's basketball game on Feb. 4. (Ryan Schmidt | The Collegian)

CSU’s men’s and women’s basketball programs had their series against the University of New Mexico postponed due to COVID-19 issues within the Lobos’ programs. As of now, the women’s team will not play until they take on the University of Nevada, Reno at home on Feb. 19. The men’s team will also be playing the Wolf Pack for their next series and will travel to Reno, Nevada, on Feb. 20.

The Rams softball team also had its opening tournament canceled due to poor weather.

The Rams are currently sitting third in the Mountain West Conference with an 11-3 conference record. CSU sits behind second-place Boise State University and first-place Utah State University. All three teams are riding a two-game win streak.

Instead of playing the last-place Lobos, the Rams will rest and practice in preparation for their final two series of the season. However, the Rams should hold their breath as their upcoming series against UNR has the potential to be postponed or canceled as well.

Due to COVID-19 issues within the Nevada men’s basketball program, the two-game series between the Wolf Pack and San José State, scheduled for Feb. 13-15, has been postponed.

Further updates and schedule adjustments by the Mountain West will be announced at a later date. pic.twitter.com/QVrxPWehLO

The Wolf Pack had “COVID-19 issues” going into the series scheduled for Feb. 13-15 against San Jose State University, which resulted in a series postponement. With just over two weeks left in the regular season, it remains to be seen if any of these series will have the opportunity to get rescheduled.

Feb. 12-13 was going to be a battle between the first and third teams in the Mountain West. This series had the potential to have huge ramifications for conference standings.

The Rams, riding a seven-game win streak and fresh off two Border War victories, were ready to cement their place at the top of the conference against the Lobos. The Rams gain an extra week to prepare for Nevada, which could prove to be a blessing or a curse. The Rams are carrying some momentum, but CSU now has a 13-day break between games.

Due to a COVID-19 issue within the Nevada women’s basketball program, the two-game series between the Wolf Pack and Air Force, originally slated for Feb. 15 and 16, has been postponed.

The rescheduled date will be announced once finalized by the MW and both institutions. pic.twitter.com/9JKbKJcUJb

The Rams were supposed to travel to Austin, Texas, for The Texas Classic from Feb. 12-14. CSU was matched up against The University of Alabama, Sam Houston State University and the University of Texas at Austin.

The tournament was canceled due to inclement weather after a winter storm warning for the Austin metropolitan area was issued.

The Rams will travel to College Station, Texas, for the Texas A&M Invitational. CSU will play Texas Tech University, Texas A&M University and the University of Central Arkansas this coming weekend.