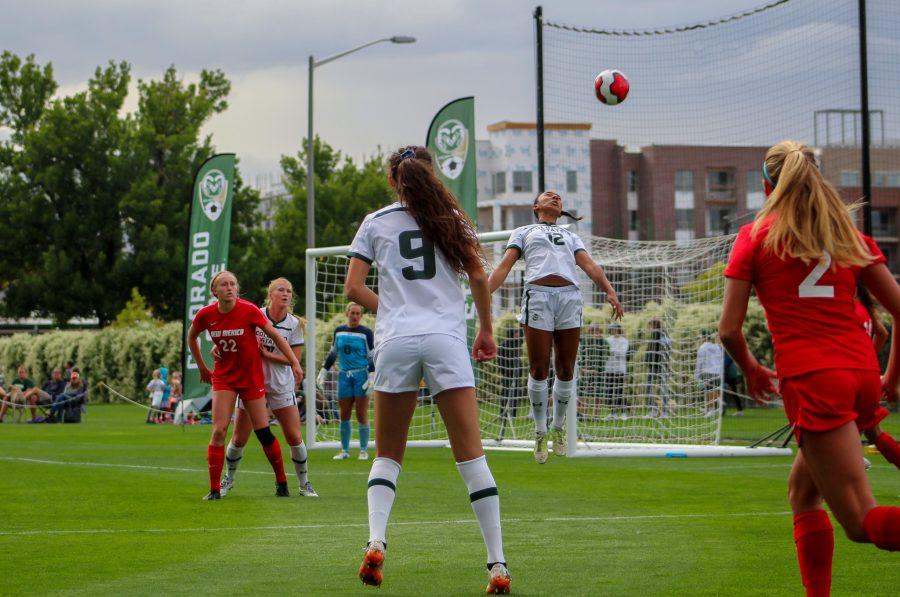 Colorado State University junior defender Lauren Jones (12) heads the ball out of the box against the University of New Mexico Sept. 27. The Rams won in overtime 1-0. (Megan McGregor | The Collegian)

The Colorado State University women’s soccer team will be able to expand on its momentous 2019 season after all. CSU released its spring season schedule on Jan. 6, after months of uncertainty after the season’s postponement in the fall.

CSU will participate in a six-week, conference-only double round-robin schedule. Over the six weeks, the Rams will play four opponents with each team playing one game at home and one on the road.

“At this time and under our current normal, I consider this a New Year’s miracle.” -Bill Hempen, CSU women’s soccer head coach.

Typically, the Mountain West Conference championship tournament is held at the end of the regular season to determine who gets an automatic bid to the National Collegiate Athletic Association tournament. Last season, the Rams had their championship dreams cut short after losing in penalty kicks to California State University, Fresno in the first round.

According to an update on the Mountain West website, there will be no culminating Mountain West tournament; rather, the top seeds from each division will play each other on April 17 to determine who will play in the NCAA tournament.

“At this time and under our current normal, I consider this a New Year’s miracle — an actual schedule we can all point to,” head coach Bill Hempen said. “I look back at the fall and how our team approached daily training with no reward of true in-game competition, and this is what they were working toward, and it is now a reality. The staff and the team cannot wait to get going again.”