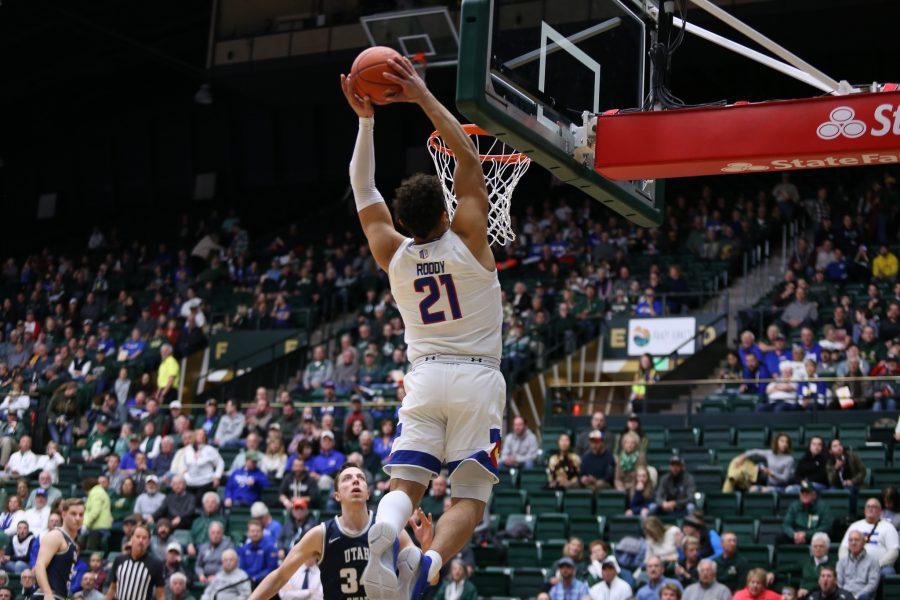 David Roddy (21) goes up for a dunk against Utah State. (Luke Bourland | The Collegian)

The Colorado State University men’s basketball team is off to one of their best starts in program history. The Rams have cruised to an impressive record of 10-3 halfway through the season.

CSU started the season off 7-1 in Mountain West Conference play, a mark that is the greatest start in conference games at any level in team history. They have since dropped a game to Utah State, bringing their conference record to 7-2.

A solid effort to improve to 10-2 on the year and 7-1 in #MWMBB play, the best start in conference play at any level in program history!@IsaiahStevens7 and @a_this31 lead the Rams with 16.#TeamTogether | #ProudToBe pic.twitter.com/cU1eZQ6psB

The Rams’ ability to sustain a heightened level of play at the start of the season is a promising sign that this team has the potential to compete deep into the season. They have won tough games, easy games, close games and are starting to get some national recognition. CSU stands at third place in the conference, only behind unbeaten in-conference teams like Boise State and Utah State.

The Rams had a chance on Tuesday to climb higher in the standings when they faced Utah State University. Their 19-point loss in the first of a doubleheader matchup against the Aggies serves as a chance for CSU to look in the mirror, come back on Thursday and make a statement.

Utah State is fresh off a home sweep against powerhouse San Diego State University. This does not bode well for CSU, as their toughest matchup thus far was their split series against the Aztecs.

The narrative that CSU is a young team with a bright future has been repeated over and over. That argument needs to be put to rest, as CSU, despite their ‘inexperience,’ is a dominant team now.”

CSU had their biggest comeback in conference history against SDSU. The 26-point comeback win was an insane indictment that CSU has the firepower to score in bunches while locking up opponents effectively when need be.

Still, big comebacks mean there are big deficits, something that SDSU capitalized on in the second game of their series. CSU suffered a 13-point loss to the Aztecs, a game where SDSU seemed to be comfortably in control for the majority of the contest.

Utah State round two will be a big test for the boys in green and gold, but CSU is more than up to the task. Time and time again they’ve been doubted and have proven critics wrong.

Looking back on the season thus far, the loss against Saint Mary’s College of California on Dec. 19 was a struggle but one that has proven to be more of a fluke than anything as CSU couldn’t get their offense to work but have since been an offensive juggernaut.

CSU’s 74.8 points per game rank fourth in the Mountain West and they are the conference’s best 3-point shooting team as they knock down 38.6% from deep with 129 total made shots from behind the arc.

Showing their offensive prowess, CSU swept the struggling San Jose State University Spartans. Great teams destroy poor teams, and that was the case once again as the Rams won by 33 and 27 points respectively. CSU is perfect against San Jose State all-time, with an overall record of 16 straight wins against the Spartans in Mountain West play.

The comeback win against SDSU was a perfect example of CSU’s ability to grind wins out as well as face adversity, and the series against San Jose State was no different. The wins were never in doubt against the Spartans but in these weird COVID-19 times they were forced to play in a recreational center. The unusual circumstances didn’t prevent CSU from putting on a show and continuing their hot streak.

CSU had down to the wire wins against the University of Nevada, Las Vegas in both of their matchups, but they kept finding a way to win. You can expect the rest of the season to be no different.

David Roddy was great as a freshman as was Isaiah Stevens, who was third-team all-conference and the freshman of the year. This hasn’t changed. These two are the leaders of the team and look like players who will run the conference for years. Roddy is leading the team in rebounds and blocks per game and is second in points.

Roddy’s 15.2 points are highlighted by the thunderous dunks and bully ball in the paint we got used to last season, but he has added so much more to his game. He has been a lockdown defender even against elite bigs who have a half-foot on him in stature. Importantly, the three-ball appears to be coming around for Roddy. He is 32.6% from deep on over 40 attempts, the sample size is large enough and he clearly has confidence in the deep ball.

Stevens is right there with Roddy with 15.5 points per game. His 6.1 assists per game are the best in the conference.

Another big move for CSU this year was putting James Moors into the starting lineup. Dischon Thomas started at the five spot to start the year and, although he did a solid job, CSU has seemingly found their rhythm with Moors running the pivot spot.

The narrative that CSU is a young team with a bright future has been repeated over and over. That argument needs to be put to rest, as CSU, despite their “inexperience,” is a dominant team now. They are legitimate contenders in the Mountain West and have put themselves in contention to make the big dance in March.