Swimming and diving return in December for in-state season 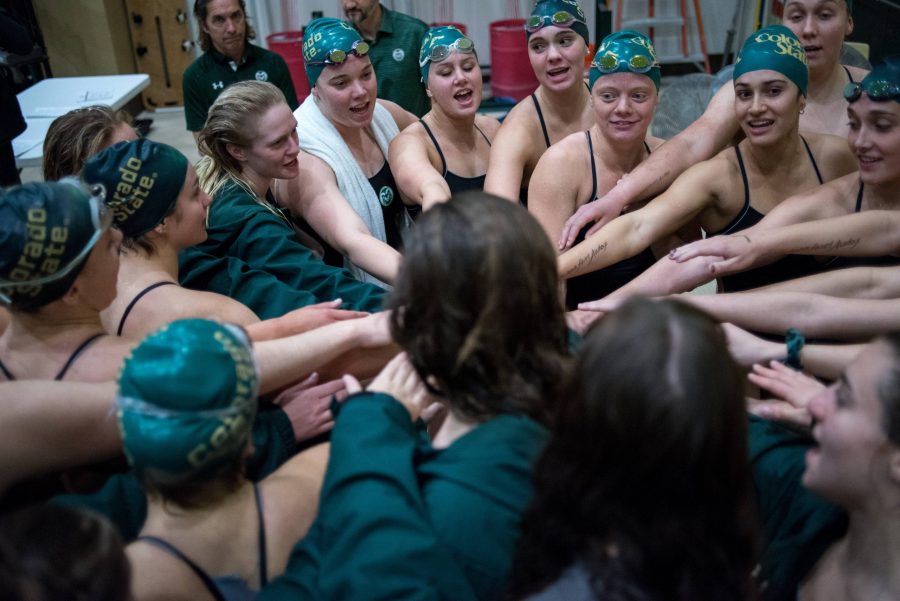 The Colorado State University swimming and diving team cheers and congratulates the University of Kansas Jayhawks at the end of the day's competitions Oct. 27, 2019.

After only having one swim meet at Colorado State University last year due to the COVID-19 pandemic, the CSU women’s swimming and diving team will start their in-state, seven-event schedule this December.

The season will begin soon after Thanksgiving break, Dec. 4, with the Rams matching up against their close rivals, the University of Wyoming Cowboys, at 5 p.m. The team opted to keep the events in the state, only facing regional opponents. The coaching staff, swimmers and divers hope this will mitigate the COVID-19 risk and keep the season alive as COVID-19 numbers rise in the state and the country.

“I’m excited not to leave the state of Colorado,” Rams head coach Christopher Woodard said. “It’s nice that we have a wealth of riches in terms of talent and competition nearby, so we can still have a competitive schedule and not have to leave the state.”

After facing the Cowboys, the Rams will face the United States Air Force Academy the next day at 1 p.m. These two matches will be the only ones scheduled for December, with the Rams going on holiday break until January. The Rams will then face both the Colorado School of Mines and Colorado Mesa University at 10:30 a.m. in Golden, Colorado.

Of the swimmers and divers from last year’s team, 23 will return.

One of these returnees, senior Skylar Williams, holds CSU records as a diver in both one-meter springboard and platform competitions. She is among six seniors who will lead the team consisting of six freshman swimmers and two freshman divers into the new season.

The Rams are coming off a 6-4 record a season ago. This CSU squad finished fifth in the Mountain West Conference and scored 830.5 points, the team’s best point total since 2017. Every single athlete on the team scored at least a point at that meet. Three Rams – Kristina Friedrichs, Hannah Sykes and Amanda Hoffman — moved into the school’s top five in their respective events at this meet, with Friedrichs achieving this feat twice.

The Rams will finish out the season by splitting up, with the divers heading to Colorado Springs for the Air Force Invitational Feb. 4-6 and the swimmers staying in Fort Collins to host The University of Northern Colorado on Feb. 5.

Due to the shortening of the last offseason, athletes missed some key training opportunities. The Rams will definitely have to play some catch-up, as with all other teams, but the coaching staff seems to be confident about the experience level of the swimmers and divers. The team will try to mitigate this by training for around four weeks before the season with a weeklong break.

“I think we’re definitely going to have challenges, I assume, as most other teams do,” Woodard said. “The bottom line is we told them it’s an ‘improvise, adapt and overcome season.’ We have to go in with the attitude of not ‘why is this happening’ but ‘why not? Why can’t good things happen? Why can’t we swim fast? Why can’t we throw down some great times?’”

Leo Friedman can be reached at sports@collegian.com or on Twitter @LeoFriedman13.