CSU Rams and the curious case of quarterback 1 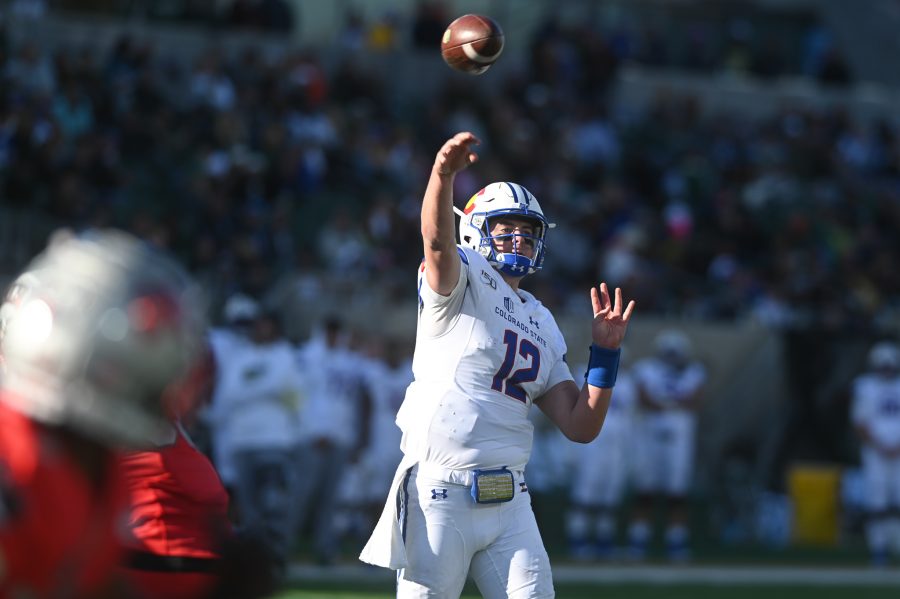 Patrick O'Brien (12) passes the ball over the heads of the University of Nevada, Las Vegas defense. (Luke Bourland | The Collegian)

New Colorado State University head football coach Steve Addazio and his coaching staff made a gamble when they started Todd Centeio over Patrick O’Brien against California State University, Fresno. Unfortunately, the idea to start Centeio looks like it landed flat on its face.

The decision to name the starting quarterback was kept secret until Thursday, Oct. 29, the date of CSU’s opener. O’Brien was the expected starter. Last year’s majority starter put up a solid 2019 campaign with 2,803 passing yards and 13 touchdowns with 209 completions.

“Bringing that new dimension to the offense was expected to open things up and add to a historically good passing attack.”

So the decision to start a relatively unproven quarterback without a lot of experience came as somewhat of a surprise to a lot of people. Centeio transferred from Temple University and is a dual-threat quarterback with killer speed.

Centeio came into CSU’s program with 71 career passing attempts but was the number two behind Anthony Russo for the Owls. CSU held their quarterback plans close to their chest and, although the decision to start Centeio was a little bit surprising, it made some sense. Centeio proved he is one of the best running quarterbacks in the game, and that is something the Rams haven’t had recently. Bringing that new dimension to the offense was expected to open things up and add to a historically good passing attack.

Centeio showed off the wheels as he led the team in rushing attempts and yards with 13 and 80, respectively. He had a breakout run for 35 yards, showing why Centeio probably isn’t out of CSU’s plans.

However, Centeio still missed a lot of throws, including some wide-open touchdown passes. He went 10-23 for 141 yards without a touchdown or interception. O’Brien subbed in the fourth and demonstrated why he started last season. In limited action, he completed 70% of his passes and had a throwing touchdown to Trey McBride.

CSU was blown out by a Fresno State team they were expected to beat, and now they see themselves with a decision to make. None has been made yet, but it’s very possible they’ll hand the reins over to O’Brien who has proven he wants to and can play good football.

O’Brien was placed in an awkward situation by not getting the start, but it made some sense. He missed time, as did a lot of CSU players in the training camp due to the COVID-19 pandemic.

Now Addazio and company have a decision to make in what is clearly a quarterback controversy. Benching your starter and the player who was supposed to be “your guy” after only one start is very rare but definitely in the realm of possibility. An argument can be made that starting O’Brien will end the quarterback controversy and possibly turn CSU’s season around.

Perhaps the team believes in Centeio and what he brings to the table, and they chalk up his performance to first-start jitters and a lack of weapons; Warren Jackson opted out of the season, and both Dante Wright and Ty McCullouch were out because of contact tracing.

Per Addazio, Dante Wright and Ty McCullouch have been out for two weeks (contact tracing).

The coach is unsure when either will return. #CSURams

The team can even look into a quarterback rotation that can see the best of both worlds with O’Brien’s arm and Centeio’s legs.

Regardless, CSU’s season has gotten off to a very shaky start, and something must be done to turn the table for the Rams.