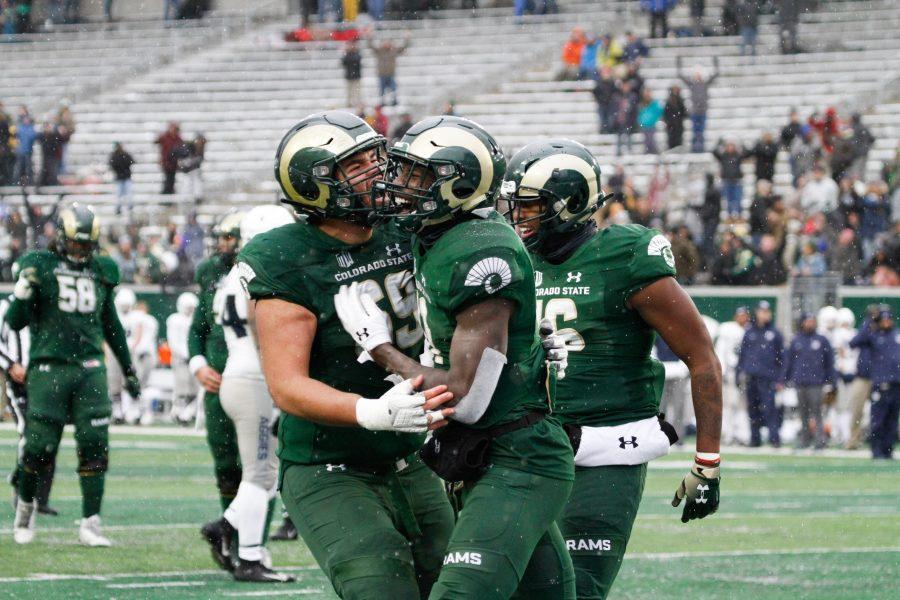 Barry Wesley and Preston Williams celebrate after a touchdown in the game against Utah State Nov. 17, 2018. (Collegian file photo)

This Halloween will undoubtedly look different thanks to all of the COVID-19-related precautions. However, just because trick-or-treating and costume parties have been put on standby does not mean that this spooky season is lost.

My fellow Collegian sports desk reporters and I have compiled an assortment of CSU’s most mind-boggling trick plays, along with the sweetest of catches, shots and spikes for Ram fans to sink their teeth into from the safety of their own home.

First up on the list of treats is a spectacular touchdown catch by former Rams receiver and current NFL standout Preston Williams. While it was hard to choose this catch over the 11 others he had against the University of Arkansas Razorbacks on Sep. 8, 2018, the touchdown catch that put the Rams within three points stood out the most.

Williams leaped high above the Arkansas defensive back, bobbling the ball with one hand initially but then securing it against his chest as he fell to the ground. This score came with 11 minutes left in the fourth quarter, putting the Rams within three of the Razorbacks.

With the help of a few more timely catches by Williams and a few stops on defense, the Rams secured the come-from-behind victory after trailing 27-9. This catch and the second half effort put forth by the Rams will be a treat for fans to look back on and enjoy for years to come.

For our first trick, we travel back in time to 1997 when the CSU Rams met the University of Missouri in the Holiday Bowl. Led by Ram legends Moses Moreno and Darran Hall, the Rams held a 28-24 lead in the fourth quarter. With a Moreno pass attempt coming just short on 3rd and 10, it was time to send the field goal unit out.

The Rams lined up to extend the lead to seven — or at least that’s what everyone thought. Once the ball was snapped to holder/backup quarterback Ryan Eslinger, it was clear the Rams had no interest in going for the extra point.

Eslinger burst through the middle of the line, breaking one tackle on his way to a 23-yard game-sealing touchdown run. Coach Sonny Lubick and the ’97 Rams won the Holiday Bowl and finished 11-2 on the year.

Next up, we go to the hardwood in January, where point guard Isaiah Stevens provided Ram fans, especially those in attendance that night, with a memory they won’t soon forget. In a Mountain West matchup versus the University of Nevada, Reno that had been tightly contested all night, the Rams found themselves down one with five seconds left.

Junior guard Kendle Moore inbounded the ball to Stevens, who took the ball the length of the court and sent his defender flying with a behind-the-back crossover before pulling up for the game-winning jump shot.

Last night was a

The buzzer-beater sent the fans packed into Moby Arena spilling onto the court to celebrate with their victorious Rams. This is definitely a highlight sweet enough to watch over and over again, and the best part is that Stevens is only a sophomore, so CSU fans have a lot more to look forward to.

Our final trick comes from a Border War classic all the way back in 1966. The Rams were playing host to a University of Wyoming side that was ranked 10th nationally. However, in a rivalry as fierce as this one, all bets are off no matter how heavy a favorite either side might be.

Trailing 7-3 against the heavily favored Cowboys, Rams coach Mike Lude called a play on third down that would eventually be known as the bounce pass. The only problem was that on the third down pass attempt, Rams quarterback Bob Wolfe mishandled the ball and mistakenly threw a regular screen pass.

The Cowboys stopped this easily, bringing up fourth down for the Rams. To the surprise of his offensive coordinator, Lude left his offense on the field and dialed up the trick play once more.

This time, Wolfe successfully bounced the lateral pass off the grass to wide receiver Larry Jackson, who then acted as if the play was dead before heaving a deep pass to tight-end Tom Pack. Pack walked into the end-zone and gave the Rams a 9-7 lead.

That would be the only touchdown the Rams scored all game, but with the help of a late-game field goal, the amazing trick play did not go to waste as the Rams handed the Cowboys their only loss of the season.

I hope you enjoyed reliving some of the Rams’ best tricks and treats from yesteryear and wish you all a happy and safe Halloween.