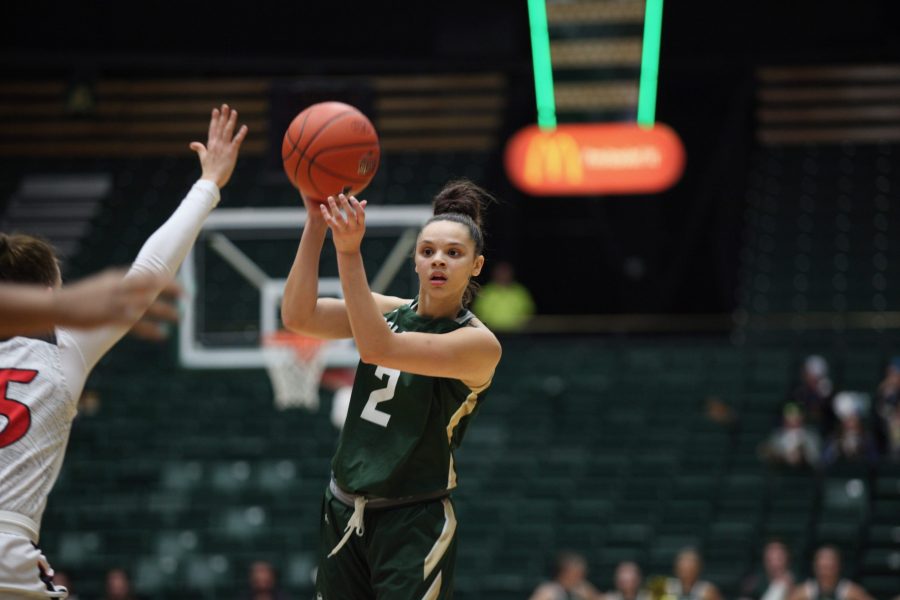 Tori Williams passes on Feb 24. The Rams lost to the Aztecs 64-61 but kept it a close game throughout. (Ryan Schmidt | The Collegian)

The Colorado State University women’s basketball team will be looking to start the new year on a high as they open Mountain West conference play against the University of Nevada on New Year’s Eve in Reno, Nevada.

The Rams suffered a tough 2019-2020 season, finishing with an overall record of 12-18. However, this year’s team shows a significantly changed roster.

According to the update, “The Rams are poised to trend skyward with the addition of four freshmen, three transfers and two now-eligible players that sat out last year due to redshirt seasons.”

The Rams will have to play the University of New Mexico in Albuquerque, New Mexico, six days after their first game, before finally getting their home conference-opener on Jan. 9.

CSU will play the United States Air Force Academy in their first conference game at Moby Arena of the 2020-2021 season.

Their tough schedule only continues as the Rams will have to play three of their next five games away from Fort Collins: University of Wyoming on Jan. 13, University of Nevada, Las Vegas on Jan. 21, and San Diego State University on Jan. 23.

Games in Fort Collins will be much more prevalent in the second half of the season, as the Rams will have four out of the next six games at Moby.

The Rams will finish conference play with a two-game homestand against the Broncos and Lobos on Feb 27. and March 2.

Coming off a first-round loss to Air Force in last season’s Mountain West tournament, CSU will have another attempt to showcase improvement from last year’s season.