A new look at the CSU’s men’s basketball team 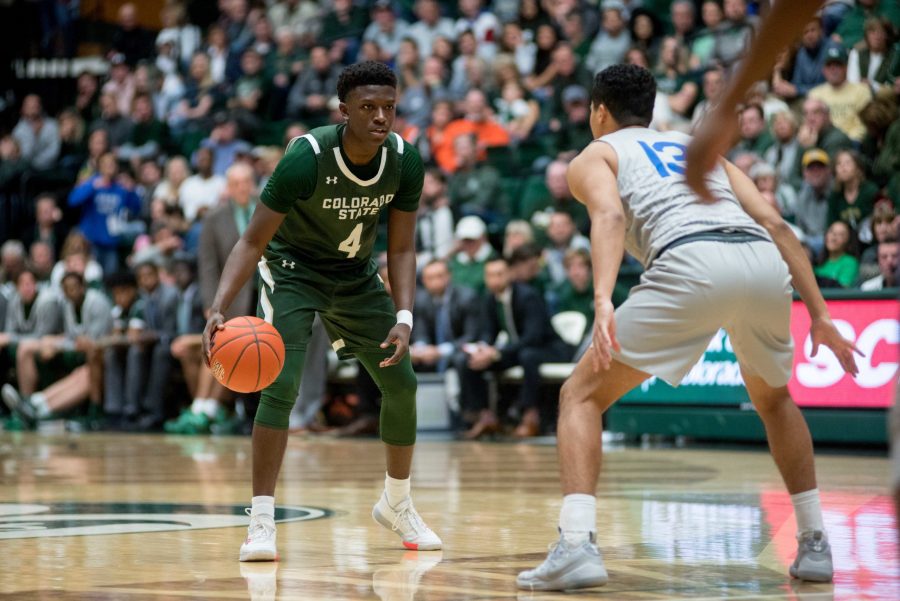 Isaiah Stevens (4) of Colorado State looks to move past the the Air Force Falcons defense at the Moby Arena on February 29, 2020. Rams won the game 87-74. (Pratyoosh Kashyap | The Collegian)

The Colorado State University football team plays their first game in a week and a half, and the men’s basketball team returns not too long after that in December.

The CSU basketball team is most definitely on the come-up. The young squad lost three players to graduation. Nico Carvacho, the team’s legendary big man who has taken his talents overseas, will be tough to replace. Kris Martin and Hyron Edwards also saw time in the rotation last season and will need to be replaced.

“The loss of last year’s seniors hurts, but there are suitable replacement options, and CSU should bring out an even better team this season.”

Head coach Niko Medved’s squad is still young and loaded with talent. Isaiah Stevens will be asked to be the best player this season.

Last season, Stevens led the team in points, assists, minutes and field goal attempts. The offense runs through Stevens, and the second-year point guard is the heart and soul of the team. After earning third-team Mountain West and freshman of the year, Stevens will need to take the next step as the best player for CSU to reach its full potential.

Stevens’ backcourt mate is Kendle Moore, who is entering his third season. Moore got 9 points per game and shot 43.5% from three last season. His true value comes on the defensive side of the ball. Moore is an absolute pest who always exerts his maximum energy on defense, as emphasized by his team-leading 1.3 steals per game.

P.J. Byrd also returns to the guard position this season. Byrd was primarily a backup last season, but the team has high hopes for the Virginia Commonwealth University transfer. His 3-point stroke looks promising, as he connected on 4 of his 7 attempts last season.

CSU was 20-12 overall last season, and a big reason why was the excellence of freshman David Roddy. Roddy came onto the scene strong after being inserted into the starting lineup. Now, as a sophomore, Roddy will be tasked with taking over a lot of the production that Carvacho provided in years past.

Roddy isn’t a prototypical center like the 7-foot Carvacho was, but he is still a beast in the paint. At 6 feet and 5 inches, Roddy is more of a wing, but weighing in at 250 pounds he is an absolute bully. Roddy fights for rebounds and collected 5.6 per game last season. That number will have to improve without Carvacho’s presence.

Roddy excels at scoring tough buckets down low against bigger defenders; if he can improve his 3-point shot, he will be one of the toughest forces to be reckoned with in the Mountain West Conference.

Stevens and Roddy were only two of the freshman to see major impact last season. John Tonje and Dischon Thomas were also vital members of the rotation last season. Tonje is an explosive wing who has a chance to be CSU’s most improved player this year. His production wasn’t the highest last season, but he is the full package offensively. With perhaps the most bounce on the team and a reliable three-point shot, look for Tonje to surprise many this season and make a name for himself.

Thomas has an extremely tough assignment ahead of him. With Carvacho’s departure, CSU finds itself a lot smaller and desperate for rebounding and solid, big-man play.

Thomas can provide just that, as he was the poster boy for consistency last season. He would only spell Carvacho for limited minutes last season, but whenever he stepped on the floor, he seemed to do exactly what the team needed. A good defender, rebounder and screen setter, Thomas will also provide a good mid-range stroke, an element that wasn’t there with Carvacho.

Adam Thistlewood is CSU’s 3-point specialist. An ankle injury somewhat limited Thistlewood last season, but he still started 28 games. He got 10.2 points per game while chucking up five 3-point attempts per game at a 39.3% clip, a solid mark for that high of volume. At 6 foot 6 inches, Thistlewood has a high and quick release that is tough to defend. He provided much more than just 3 shooting and will be a key starter this season.

The rest of the team will be all-new to CSU in-game action. Ignas Sargiunas sat out last season due to transfer rules from the University of Georgia. The 6-foot-5-inch guard will be a welcome addition. He has a 3-point strap and should add a boost offensively for the Rams.

James Moors is also familiar with the squad as a member last season, but he redshirted. Another guy who will fill the Carvacho void, Moors is a stretch four/five who can knock down the three-ball.

Jacob Jennissen, Isaiah Rivera and Trace Young are all freshmen. If any or all of them can come in like last year’s freshmen and produce, that will be massive in building on last season.

Jennissen hails from Minnesota and is an intriguing center prospect. He is tall and skinny with some guard skills, and those types of players seem to be more commonplace in modern basketball.

Rivera is a three-level scorer from Illinois. At 6 foot 5 inches with good strength, Rivera can play guard or forward.

Young is a flashy guard from Texas. He’ll need to add strength but is intriguing as a special ball-handler who can finish inside and shoot as well.

Medved has turned this program around since becoming the head coach, and CSU is headed in the right direction. The loss of last year’s seniors hurts, but there are suitable replacement options, and CSU should bring out an even better team this season.