Keys to game 7 success for Denver Nuggets against Utah Jazz 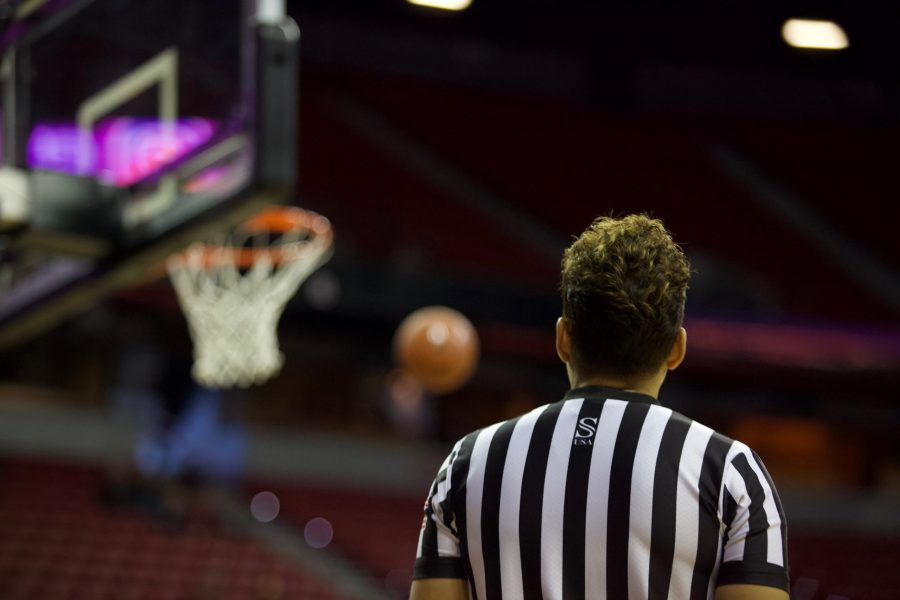 A referee watches the Fresno State Nevada Game on Mar. 2. The Bulldogs won against the Wolf Pack 75-71. (Ryan Schmidt | The Collegian)

For the third playoff series in a row in the last two seasons, the Denver Nuggets are headed to game seven. Last year in round one, they prevailed against the San Antonio Spurs before falling in game seven to the Portland Trail Blazers. Now they find themselves in a life-or-death elimination game once again against the Utah Jazz.

After winning the last two games against the Jazz to stay alive, how can the Nuggets keep the momentum going and complete the rare 1-3 deficit comeback?

In his return from a hip-strain injury, Gary Harris had four points on 1-4 shooting. Yet Harris was instrumental in the game six win and will again be vital in game seven.

“Clarkson is very one-dimensional; when he gets the ball, he is looking to score.”

Before Harris’ return, Utah’s sixth-man shooting guard — with emphasis on the shooting — Jordan Clarkson had been averaging 15 shots per game and was absolutely torching the Nuggets. He made 16 3-pointers through those first six games as well.

Clarkson is very one-dimensional; when he gets the ball, he is looking to score. You can overplay the shot, as the likelihood of him passing is slim. However, the Nuggets had no options to guard him as most of Denver’s premier perimeter defenders had to give their attention to Utah’s superstar Donovan Mitchell.

Stopping Mitchell is borderline impossible, so with Denver’s top defensive stopper back, Harris needs to ensure a similar defensive game. In game six, Clarkson only had 11 points on an inefficient 1-6 from three and 5-14 from the field.

Clarkson was a big reason why the Nuggets trailed in the series, but if Harris can once more make Clarkson a non-factor, then the Nuggets will only need to limit Mitchell in order to ensure victory.

The Jazz is the top 3-point shooting team in the league and seemingly haven’t missed from deep in the playoffs. That’s a big reason the Nuggets have had to come back in this series.

However, the Nuggets have their fair share of sharpshooters. Jamal Murray has been lethal from deep and is a man on a mission, making it likely that he will continue his tear from three.

The Nuggets still need their other shooters to show up while simultaneously limiting the three-point barrage the Jazz have put on thus far. Michael Porter Jr. hasn’t been as lethal from deep as he was at the end of the regular season in the bubble.

And while Nikola Jokic and Jerami Grant have been good from three, the team needs Porter Jr. to hit his shots if he is getting rotation minutes. This is especially true since his defense right now is expected to be bad, so there isn’t much reason to play him if the long shot isn’t falling.

This series has displayed crazy good shooting, but the Nuggets can’t risk another deep ball explosion by the Jazz nor a 3-point shooting slump themselves. Two or more of Harris, Torrey Craig, Monte Morris and Porter Jr. need to hit their deep shots this game.

This is especially true for open looks by Harris and Morris. If they can make shots, the defense will have to spread out which will significantly open up the offense for Jokic to operate and for Murray to slash to the bucket.

Spreading the floor will give the stars some options to pass to if the Jazz starts overplaying Jokic and Murray who have both been feasting and are likely to be game-planned for.

Murray is having a historic series. He is one of four players ever to have multiple 50-point games in a playoff series. That list includes legends Michael Jordan and Allen Iverson as well as series rival Mitchell.

He is also the only player besides Jordan to have more than 40 points and more than five rebounds and assists in three straight playoff games. And while Jokic has faded in the shadow of Murray’s heroics, he is still dominating with 25.7 points, 7.2 rebounds and 5.7 assists per game.

Although role players are supposed to elevate their games and carry their teams in the playoffs, the Nuggets still need one more player to get at least 17 points in game seven. In this series, they are 2-1 when their third-leading scorer gets at least 18 points, but they are 1-2 when that doesn’t happen.

Grant has been the Nuggets’ third-best player in the playoffs, and he is the likely candidate to approach 20 points in game 7. But offensive success from Paul Millsap, Morris or Porter Jr. would definitely be welcomed.

The Jazz are likely to focus heavily on neutralizing Murray, which should allow Jokic to have more success, yet the Jazz still have former defensive player of the year Rudy Gobert guarding The Joker at the center position.

The Nuggets need one more player to step up and score 15+ points because although scoring explosions from Murray and Jokic are expected, the Nuggets can’t bank on 50-point games and triple-doubles from the two star players to carry the team to success.