CSU sport clubs are a mix of community and competition 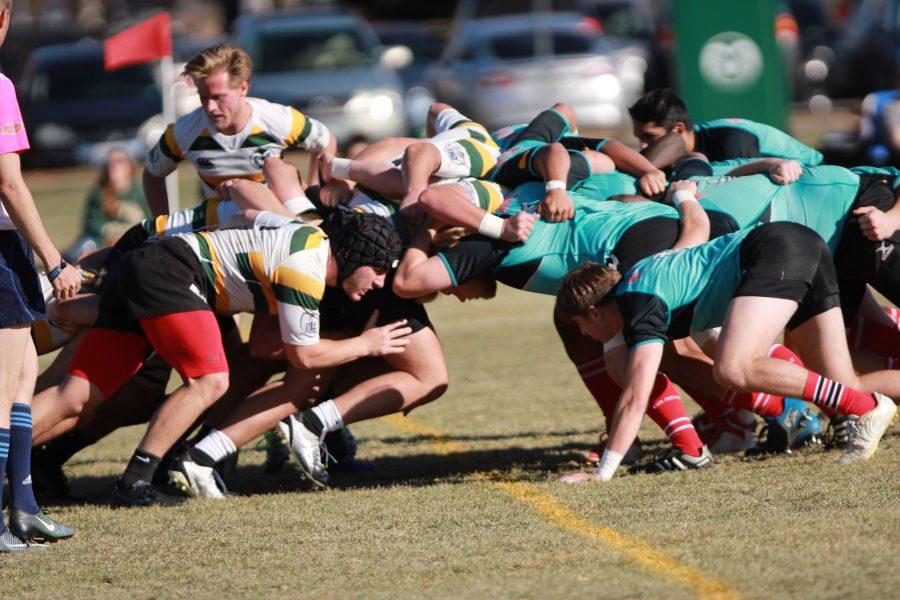 Colorado State Rugby takes on New Mexico on Nov. 9 on the IM fields. CSU won by a landslide score of 60-8. (Asia Kalcevic | The Collegian)

The bedrock of sport clubs is community and a lot of competition — heed the emphasis on competition because if you join a sport club with the idea it will be an extended season-long intramural team, you will be sorely mistaken.

If you are new to Colorado State University, there is a strong chance that sport clubs will look significantly different to you than they did for me during my freshman year due to the COVID-19 pandemic’s halt on sports.

Practices and seasons are still very much up in the air, and there is currently no official word on how the fall sport club seasons will look.

However, the community you can find throughout the numerous sports under the sport club umbrella is still available and will be present regardless of on-field presence of these teams.

“Rugby has resulted in more bruises, blood and stress than I can possibly account for, but the growth as a member of the CSU community I have seen in myself from taking part in this sport is second to none.”

There are roughly 30 sport clubs offered at CSU, and they range from the alpine ski team to esports to shotgun sports. If you want to compete in it, chances are CSU has a team for you.

I’ve been playing on the Colorado State men’s rugby team since the day I walked into the dorms, and the focus and intensity each player brings to every practice and game is enough to convince you that it is a fully-funded NCAA program. It is definitely not, but that’s not a bad thing.

Prospective sport club athletes should know there is usually a fee to play each semester, depending on your sport. This helps clubs fund their travel, jerseys and coaching payments throughout the year.

Most sport clubs practice three to five times a week with games being played on the weekends. Who you compete against depends on your sport and the league you are in. Travel is an essential part of sport clubs, and you can expect to be traveling in and out of the state to play opponents.

You may not be traveling by plane or in team buses — often I find myself crammed with seven other rugby players into a rented minivan on an eight-hour drive to New Mexico — but having the opportunity to represent your school is worth every second of cramped car space.

Sport clubs are completely student-run. Officers, the members of each team’s leadership group, are responsible for booking games, field space, referees, organizing travel and every other logistical or financial administrative responsibility you could think of.

Luckily, students do have help in the form of the sport club advisors and the staff that work at the club sports’ office in the Rec Center to help orchestrate the numerous moving parts that allow the clubs to exist.

The community that I found with the CSU men’s rugby team is one that has carried me through college, a sentiment I am sure many students across many other club sports will share.

I never had an awkward move-in day to the dorms or trouble finding my first couple classes because instantly I had over 30 teammates bonded by competition and a love for the sport that took me under their wing.

Since my naive freshman year, I have become the team’s president and will start working within the sport club department this fall. Being the president of a sport club is stressful but extremely rewarding. It has allowed me to help build and grow our team as my seniors did for me. Plus, it doesn’t look terrible on a resume.

Rugby has resulted in more bruises, blood and stress than I can possibly account for, but the growth as a member of the CSU community I have seen in myself from taking part in this sport is second to none.

I urge incoming students to take a chance on any club sport you may be interested in. Even if seasons get canceled this year, reach out to the teams and try to get involved. If not this year, maybe next, and worst-case scenario, you get to know some people with common interests and stay involved with a sport you love.