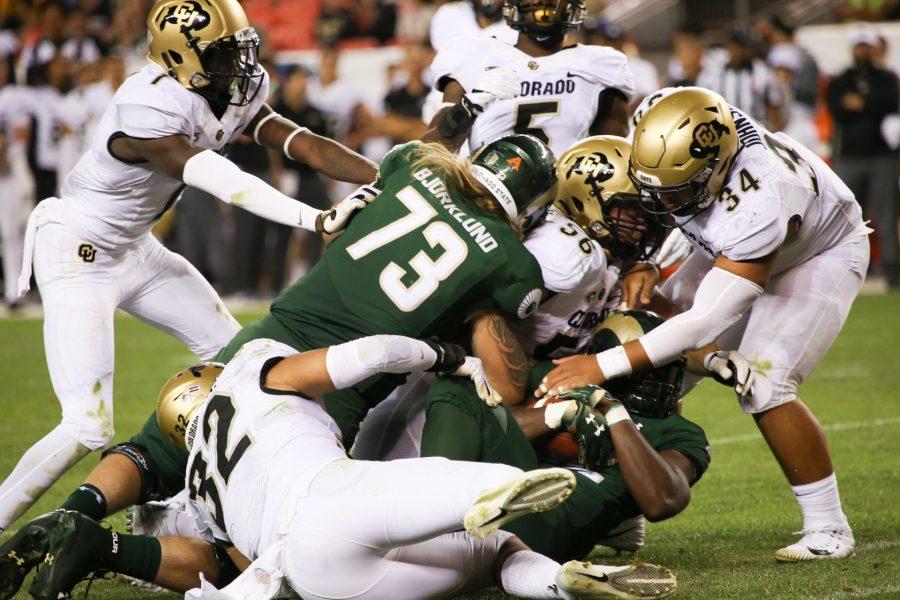 CSU football players are dogpiled during the Rocky Mountain Showdown. The Rams lost to the Buffs 13-45. (Collegian file photo)

The Colorado State Rams vs. the University of Colorado Buffaloes, Steve Addazio vs. Karl Dorrell, Canvas Stadium vs. Folsom Field. The potential matchups in this year’s Rocky Mountain Showdown are electrifying, but with the PAC-12 conference’s recent announcement to only play in conference games, fans may not get to see these rivalries materialize.

The PAC-12’s announcement comes just days after the Ivy League canceled all sports until at least January 2021 and the Big Ten conference’s announcement moving to a conference-only schedule. All of these schedule adjustments are intended to help mitigate the spread COVID-19 among student-athletes throughout the fall season.

As the Rams are a part of the Mountain West Conference, this schedule change effectively cancels the in-state matchup between the two schools.

If played, this year’s contest will be the 92nd overall meeting and the first in Fort Collins since 1996. A showdown on home soil is something every member of the green and gold is looking forward to.

Is there any scenario where this game takes place? Possibly, but it would require the PAC-12 to bend their rules a little.

The strongest argument for the Rocky Mountain Showdown to occur resides in the close geographic nature of the two universities.

“The potential matchups in this year’s Rocky Mountain showdown are electrifying, but with the PAC-12 conference’s recent announcement to only play in conference games, fans may not get to see these rivalries materialize.”

Fort Collins is only 55 miles from Boulder, and if the reasoning for going strictly to an in-conference schedule is to minimize travel, this game should not be affected.

According to The Denver Post, CSU Athletic Director Joe Parker agrees that the in-state game would harbor much less risk. The showdown in Fort Collins would be “the least risky environment (CU) would play in all year,” Parker said.

Any game would need the cooperation and approval of both conferences. If allowed, the PAC-12 could feel pressured to readdress other out of conference matchups, especially games of a higher profile.

The apparent cancellation of the University of Alabama vs. the University of Southern California football game is a prime example of how the PAC-12 is already taking heat for their decision. Alabama Athletic Director Greg Byrne believes this announcement is not set in stone, as he said that Alabama still intends to play this game and will adjust as needed, even after the PAC-12 announcement.

There has been no official statement regarding the cancellation of the Rocky Mountain Showdown by either CSU or CU, so for the moment not all hope is lost. However, if the PAC-12 does not budge on its initial statement, the chances that fans will see this game are slim.