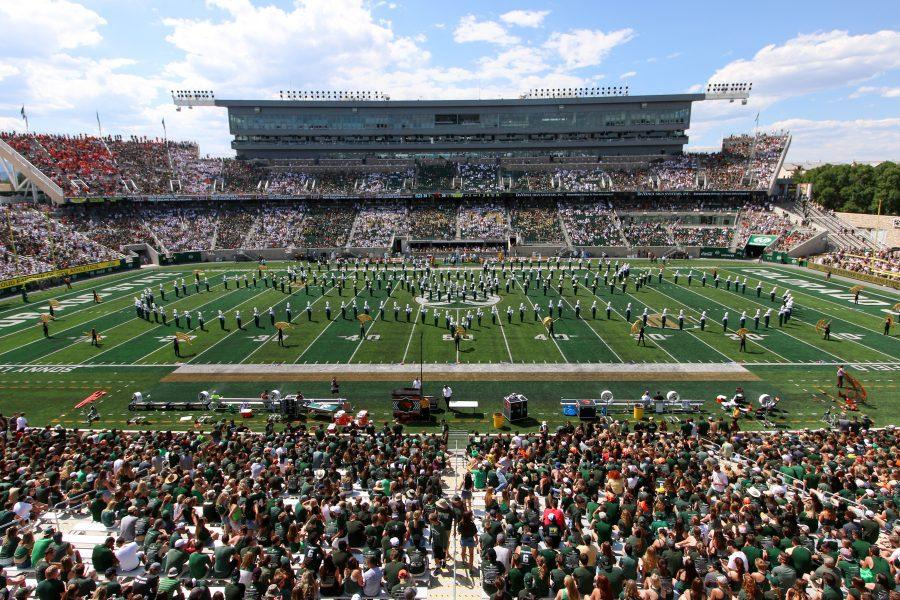 The CSU marching band preforms at halftime during the inaugural football game at the new on-campus stadium on August 26, 2017. (Jack Starkebaum | Collegian)

As athletes return to play across the world, there is one question plaguing every supporter’s mind: When will fans be returning to stadiums?

With no clear answer to how game attendance will look in the fall, Colorado State University Athletic Director Joe Parker’s vision for the fall seasons is rooted in the support of health officials.

I remain excited for the fall. … Modified fan experience protocol is being finalized for all aspects of game day.” -Joe Parker, CSU athletic director

“This transition has been energizing for all of us, but I want everyone to know that we are 100% committed to following the guidance and direction of our state, county and University health and safety professionals,” said Parker in an update.

With no clear indication of when or how fans will be allowed at sporting events in the fall, the one constant Parker maintains is optimism.

“I remain excited for the fall. … Modified fan experience protocol is being finalized for all aspects of game day,” said Parker.

A reduction in fans will dilute the energetic atmosphere students and hometown supporters create, but the immense financial burdens brought on for CSU athletics would be more detrimental.

While addressing the media in a virtual format last month, Parker commented on the financial insecurity athletic institutions face.

“The other half (of the athletic department’s budget) comes from generated revenues,” Parker said, according to the Greeley Tribune. “So I’d say there is still uncertainty as it relates to our ability to generate revenues based on crowd sizes.”

For the Rams’ home football opener against University of Colorado, Parker indicated three different options regarding how fans could be ushered back into the stadium.

Ideally, the stadium would be filled to full capacity, but if that’s not permitted, there are plans to drop attendance to 50% or even 25% before limiting fan attendance altogether, according to the Mountain West Wire.

Should fans be barred from attending games in the fall due to COVID-19 restrictions, CSU might take a page from other professional organizations dealing with the same predicament.

In the absence of students at the Rocky Mountain Showdown, maybe there will be a stadium full of stuffed CAM the Rams following the Korean Baseball League’s idea to pack their empty seats with stuffed animals.

The Ram Ruckus student section’s enthusiasm will be hard to match, but blasting artificial crowd noise over the loudspeaker like the English Premier League does for its soccer teams could be a step in the right direction to recreating the game day atmosphere that players may be without in the fall.

Even without the support of die-hard CSU season ticket holders in the stands, the Rams could take a cue from the San Francisco Giants baseball organization and allow ticket holders to submit photos of themselves to be placed on cardboard cutouts within the stadium.

Regardless of how stadiums look in the fall, Parker maintains the faithful Green and Gold supporters will have precedence as game day procedures are finalized.