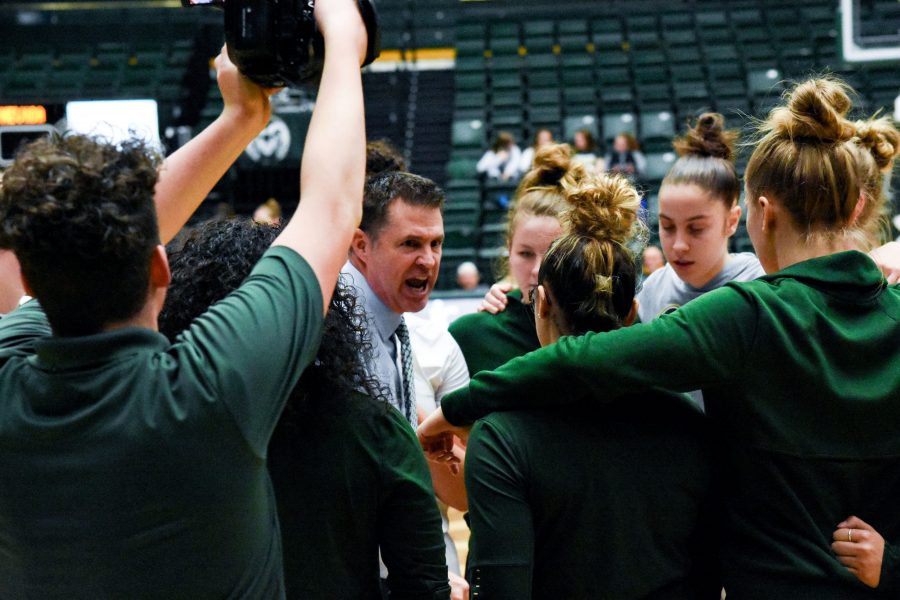 Coach Ryun Williams speaks in a huddle during the January 23 2019 game against University of Nevada. (Collegian File Photo)

As the Colorado State women’s basketball team looks toward preparing for their next season, Ram fans will have a lot to be excited about, as the team has added three new transfers, head coach Ryun Williams announced.

The trio of fresh faces includes sophomore guard McKenna Hofschild, graduate forward Karly Murphy and junior guard Petra Farkas. They all have potential to make a splash this year and help the Rams rebound following their painfully average 12-18 finish to last season.

Starting with Hofschild, the 5-foot-5-inch sophomore transfer from Seton Hall has an abundance of potential. In high school, Hofschild was the sixth-ranked recruit in the state of Minnesota after breaking her high school’s single-season and single-game scoring record while also accumulating three all-conference and two all-state selections.

In her freshman year with the Pirates, she made an appearance in 18 games, averaging 8.4 minutes, 2.1 points and 1.7 assists per game. That’s not bad when you consider the freshman was competing for playing time against three other freshman guards in her first season.

With only one season under her belt, Hofschild transfers to the Rams with three years of eligibility. With that, her speed and her proven scoring touch, Hofschild is sure to be a player that the Fort Collins faithful can get excited about for many seasons to come.

The second transfer, Murphy, makes the move from the University of Wisconsin-Green Bay and brings invaluable experience with her. As a redshirt freshman in the 2017-18 season, Murphy was named to the Horizon League All-Freshman Team after averaging 8.1 points per game and shooting an impressive 50.2% from the field to help her team go 29-4 to win the Horizon League and land an appearance in the NCAA Tournament.

Following the 2018-19 season, which saw Murphy sidelined because of an injury, she picked up right where she left off, averaging 8.3 points and 4.6 rebounds to finish her final season as an undergraduate.

What Murphy brings to the Rams is a winning mentality, and with CSU losing many of their games last season due to lackluster second half performances, she looks like a player that could step up with experience to help the Rams close out those close games.

To complete CSU’s signings, Farkas joins the Rams as a junior from the College of Southern Idaho. The 5-foot-10-inch Hungarian led her team in the 2019-20 season in scoring, rebounding and assists, averaging 13.1 points, 6.4 rebounds and 3.6 assists.

Farkas started all but four of the games she played last season, and she led her team to the Region 18 Championship Game. A threat on both ends of the court, Farkas also tallied 12 blocks and 48 steals last season.

Farkas is a well-rounded scoring machine, also averaging a boast-worthy 37.4% shooting percentage from behind the arc in the last season, and she will fit perfectly into Williams’ offense. Farkas should have Ram fans everywhere excited to see what she can bring this season.