Senior Ashley Ruiz opens up about her DI softball experience 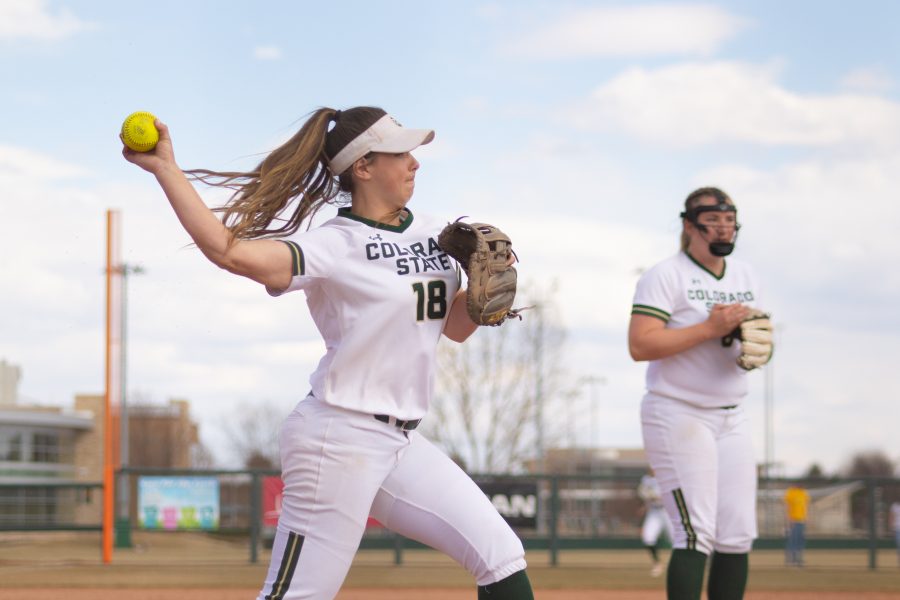 Ashley Ruiz (18) throws the ball to first base, during the University's second game against Purdue University at the Colorado State Classic Softball tournament on Mar, 8, 2020. The Rams win 4-3. (Devin Cornelius | Collegian)

Sometimes life hands you lemons, and sometimes it hands you a bat, a dream and a lot of talent. Ashley Ruiz’s story is filled with peaks and valleys, but the experience of playing Division I collegiate softball has made her stronger.

Ruiz, a senior first baseman and psychology student, grew up playing softball at four years old in California. Ruiz was recruited by the University of Kentucky to be a pitcher as a freshman in high school. Throwing 65 miles per hour walking into her junior year of high school, Ruiz thought she had her life planned out. Little did she know, her path would change drastically in a two-year period at Kentucky.

During her freshman year as a Wildcat, Ruiz was in for a big culture shock. She lost her pitching speed and found herself across the country from her biggest support system, her family. Despite working tirelessly to restore her pitching success, Ruiz fell into a rut of hardship.

“I transferred because I wasn’t very thrilled with the playing time there, and I’m also closer to home,” Ruiz said. “Being from California, this is a little easier for my parents to travel to, and I thought that it would be an easier transition.”

Even though she moved closer to home, Ruiz was still facing one big problem: her pitching. With her family still in California, Ruiz had to learn a new position at a brand new school. Ruiz shared that her dedication to the team was her motivation to persevere. She said that the bond on the team is unlike anything that she has encountered before.

“(The biggest difference is) mainly having a belief and trust in my teammates,” Ruiz said. “While I was (at Kentucky), it was like we were a team, but we were individuals. Here it feels like a community. I think that is the biggest thing that (transferring) taught me. Growing up, I was in programs that you say you’re a family, but you don’t really know how to show it. When we’re on the field, you can see the love that we have for each other and the passion that we share for the game.”

Much like Ruiz’s journey, it was no easy feat. During a high-stakes game on May 4, Ruiz hit a three-run home run in the top of the seventh inning to push the Rams ahead of Boise State to seize the Mountain West Championship.

“We had two runners on, and we were losing, and I came up with two outs and ended up hitting the winning home run,” Ruiz said. “That for me was the greatest moment I’ve ever experienced. Just being able to run around third base and see all of my team there and excited. It was just such a blessing to be that person there in that moment and feel the energy and love that they had for me.”

MMMYYYYYYY OOOOHHHHHHHH MMYYYYYY. Ashley Ruiz LAUNCHES the first pitch she sees with two outs to left center and we TAKE THE LEAD!!

After Ruiz’s addition to the team during the 2019 season, head coach Jen Fisher has been more than pleased with what Ruiz brings to the team culture. Ruiz radiates humor, humility and leadership, and she has proven to be a valuable addition to the Rams.

“She has some of the best power that I’ve ever seen,” Fisher said. “Her bat is so lethal. She just has incredible power. … I think that is what is really special about her. She is very humble and extremely empathetic. She brings a really positive vibe to our team. She doesn’t have a big head at all. It’s really funny to see someone with that much talent at the plate and have that much humility. It’s neat to be around that.”

Despite some setbacks along the way, Ruiz has maintained her love for the game and has learned perseverance and focus, and she looks forward to continuing to work with collegiate athletes after graduation to better their college experience.

“Don’t give up,” Ruiz said. “I know at times it gets tough, and at times it seems like there’s a lot of pressure or maybe you don’t understand something, or something doesn’t click, but it takes time to process and learn. Softball is a game of failure, and if you allow it to beat you, then who are you really hurting? I’d say to just continue trusting the process and trusting your ability, and keep a positive mindset always.”