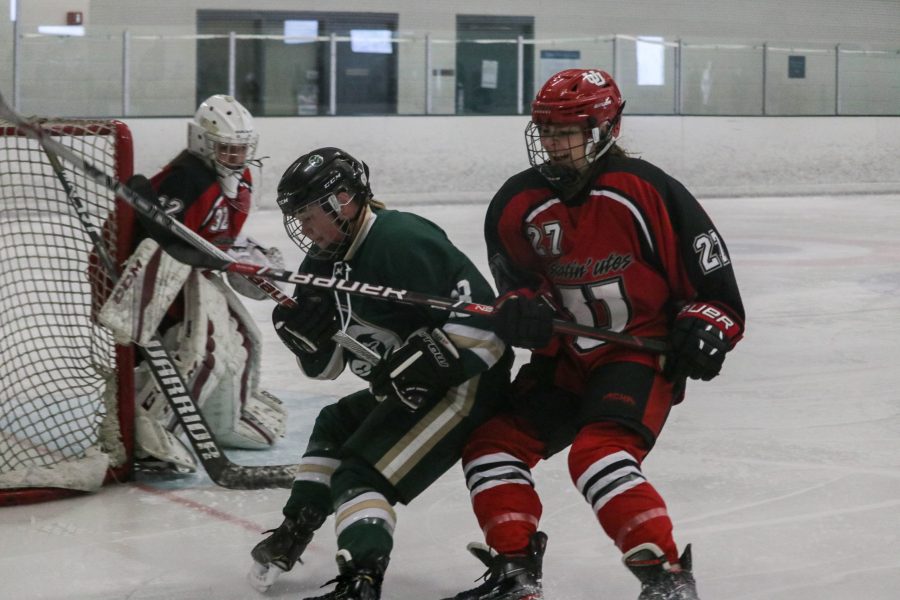 Having made the Western Women’s Collegiate Hockey League regional in every season, the Colorado State women’s hockey team took a trip to Utah for the regional tournament, with the winner automatically advancing to the 2020 ACHA Nationals in Dallas. The Rams were one of four teams in Salt Lake City. CSU battled it out with Arizona State University, the University of Colorado Boulder and the University of Utah.

The CSU women’s club hockey team had a rough start as the WWCHL tournament kicked off from Salt Lake City. The Rams took on the Sun Devils in what was a tightly contested first two periods that eventually led to an Arizona State breakout in the third.

From the drop of the puck, CSU came out with a burst of energy, taking the Sun Devils by surprise, and they got off to a good offensive start. However, CSU couldn’t keep the momentum up as both teams battled it out in a scoreless first period. In the middle of the second period, Sun Devils’ forward Sara Zimmerman recorded the first goal of the game.

Zimmerman took full advantage of a rebound in front of the net, giving the Sun Devils a 1-0 lead. CSU was not without their chances to answer, as they had three power play opportunities in the second. The power plays did a good job of keeping the puck in the offensive zone, tiring out the ASU defenders and generating some high-quality chances but no goals.

During the third period, the game opened up in favor of Arizona. From the drop of the puck, they held the momentum, tallying one power play goal, an extra attacker goal (delayed penalty call) and an empty netter to seal the deal.

Kallie Clements had the lone goal for the Rams. She took a breakaway opportunity to the net and scored just below ASU goalie Jordan Boulden’s glove. This gave CSU some late moments, but it wasn’t enough to overcome the 4-1 final score.

The second day of WWCHL action saw the University of Colorado taking the ice against the lady Rams. Following up on the tough loss to ASU from day one of the tournament, CSU battled hard against the better-ranked Buffs, but in the end, they came up one goal short.

After the previous night’s outstanding performance from Elli Strittmater, in which she had 42 saves, she once again got the job of defending the crease. She had a tough task, as Sara McNamara and the Buffs came into the game with a 16-7 record. McNamara is the leading scorer for Colorado with 21 goals and 16 assists over the season. On the scoring side for the Rams, Stephanie Talone comes in with 15 goals and 13 assists.

The first period of play was all CU. From the drop of the first pick through the final horn, the forecheck and offensive pressure was too much for CSU to handle. The biggest sign of the momentum shift was CU’s 21 shots on goal compared to a meager four shots for CSU. Neither team was able to take the advantage and capitalize on these chances, as both teams went to the locker rooms tied at zero.

Much like the previous day’s contest, the first 10 minutes of the second peiod resulted in a lot of back and forth between the two teams. Right around the 10-minute mark of the period after Strittmater had stopped over 25 shots on goal, Sydney Browne was able to get the first puck into the net off of a two-on-one advantage after a CSU turnover.

Not to be outdone and riding the momentum of Strittmater’s unbelievable performance, CSU’s LeeAnn Wengenroth took a blocked pass at the blue line the length of the ice to score on the breakaway off the crossbar.

“As I came down the ice, I just kept waiting for (Lexi Hartmann) to move, but she never did, so I just tried to put it up top shelf,” Wengenroth said.

In the third, the Rams did not get off to a great start. While killing off a penalty from the second, McNamara took a cross-ice pass right on the tape for the one-timer past Strittmater. Even with all the time left in the third, it was too much of a hill to climb for the Rams, and they came up short, losing 2-1. While CSU didn’t find the results they wanted on the ice, it was the off-ice connection that grew for the team.

“This group has grown a lot from the beginning of the season, and they have nothing but great things in front of them moving forward,” CSU captain Kristen Perry said.

If you want to hear the action, both games from this weekend are posted on KCSU’s website.

Dixon Lawson can be reached at sports@kcsufm.com