Women’s basketball bounces back to secure win in Orange Out 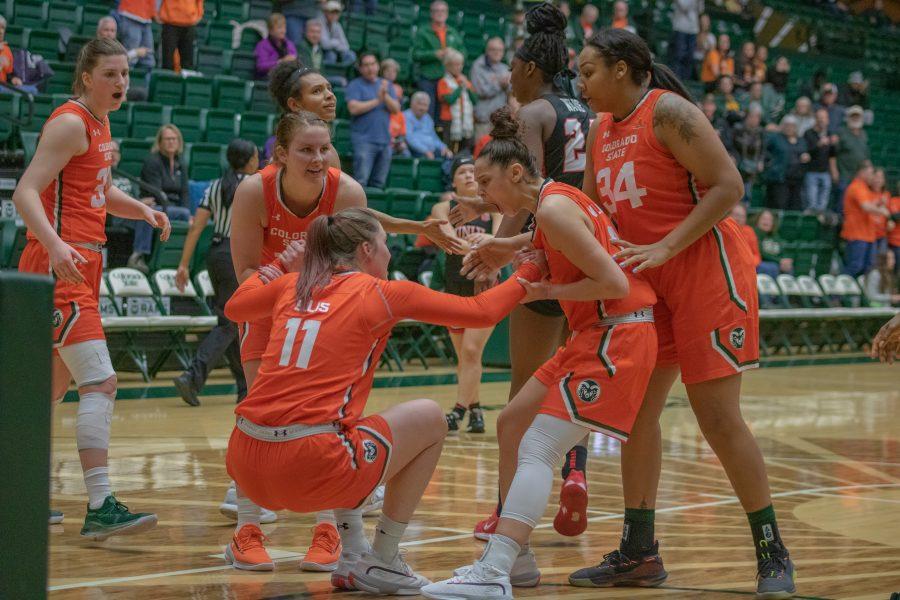 When Moby goes orange, the atmosphere will never disappoint. And if you’re the Colorado State women’s basketball team, picking up a crucial conference win in that atmosphere makes it feel all the better. That’s exactly what happened on Wednesday night, as the Rams were able to topple the visiting University of Nevada, Las Vegas Rebels 60-56 in an exciting comeback to pick up a much-needed conference victory.

The Rams took control early as forward Makenzie Ellis opened the scoring for CSU with a strong left-handed finish. Ball protection seemed a top priority for the Rams, as their guards took time with their possessions, working hard down low to create open looks. Shooting efficiency has been a struggle recently for this Rams team, but they looked confident in the first frame, shooting 54.5% from the field.

Sophomore guard Tori Williams and Ellis were running the show on offense, contributing six and seven points respectively to combine for 13 of the Rams’ opening 15 points while working hard on the defensive side to keep the Rebels to 28.6% shooting in the quarter.

However, the Rams fell into the same patterns they’ve encountered throughout their season. After an efficient first period of play, CSU’s offensive potency declined as the second period began. The Rams went the first five minutes of the second quarter with only one successful shot to their name. CSU’s Lore Devos contributed six points late in the half to keep the Rams on track and help her team take a narrow 26-25 lead into the locker room.

The Rebels came back in a big way in the second half. The Rams shot well in the third quarter, with 46.7% of their shots finding the target, including an impressive 3-5 from 3-point land in the third. UNLV found their groove as well; freshman guard Melanie Isbell poured in a career-high 13 points. Before the contest, Isbell was averaging just over four points on the season, but her unexpected offensive contribution was enough to give the Rebels a 48-45 lead going into the final frame.

CSU’s offensive and defensive effort bounced back during the final period of play. After being down by seven with about 3.5 minutes to go, the Rams went on an 11-0 run to end the game.

Lore Devos came up clutch in the final seconds. After going a perfect three for three from the field in the final quarter, Devos was fouled, sending her to the foul stripe. The Belgian nailed both of her free-throws to bring her point total for the quarter up to eight while putting the game out of reach for the Rebels to ensure a 60-56 comeback win for the Rams.

“It was a much-needed victory,” head coach Ryun Williams said. “It didn’t look great, but you keep getting stops, and you keep defending, keep rebounding and finish strong.”

While the Rams did come out on top, it’s hard to ignore the fact that this team still has some things to improve on as they set their sights on the conference tournament. CSU looked more composed and patient with their shot creation, taking time against a tough UNLV defense to create high-percentage looks. However, creating those looks and converting on them are two different stories, and the Rams will have to improve that offensive potency to avoid falling into their usual struggles.

“Those silly mistakes, we still have to clean those up,” Williams said. “We’re better than that, and I don’t expect those negative plays to be made. But you gotta play through it, and our kids did that tonight.”

CSU’s next matchup will come against San Jose State on Saturday, Feb. 22. The Rams will travel to California hoping to improve on their 6-9 conference record in the hopes of securing a higher seed for the tournament in Las Vegas.

Bailey Shepherd can be reached at sports@collegian.com or @B_Sheps on Twitter.