Track team splits up to run in 2 competitions 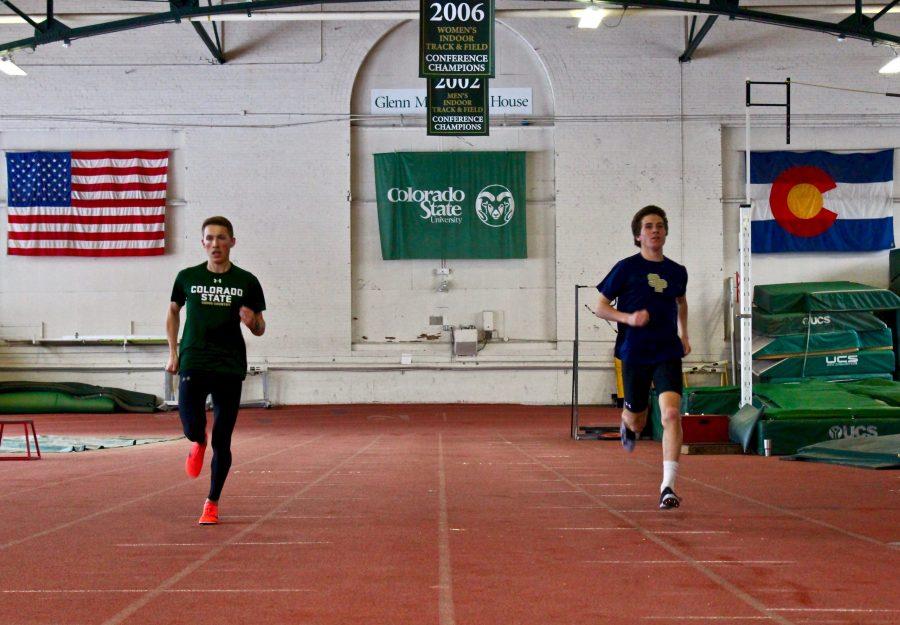 Sophomore Business major Jacob Brueckman (left) and Civil Engineer major Andrew Forsyth (right) run down the center of the Glenn Morris Field House after practice. Brueckman and Forsyth are on the Cross Country and Track team at CSU. The two men are preparing to run at CU Boulder Track Invitational on Saturday February 3rd. Both men have been running since their freshman year in high school. Brueckman stated why he liked running by saying, "I like the way that there is a direct result from the training you do to your performance." (Matt Begeman | Collegian)

The Colorado State track and field team will continue their indoor season in two states this weekend, dividing and conquering to take the Midwest and Southwest. New Mexico will be hosting the Don Kirby Elite Invitational Thursday and Friday. The Rams will also be sending the team’s long-distance runners to Iowa this Friday and Saturday to compete in the Iowa State Classic.

The squad is coming off a good showing at the UCCS Mountain Lion Open. The team won six events and achieved three all-time CSU top 10 records. The Rams also swept the hurdles category at the event. This meet was considered a “tune-up” by coach Brian Bedard for the Don Kirby Elite, with many teams bringing tough competition to New Mexico in order to prepare for Mountain West Indoor Championships, which are coming up just later this month.

The Rams also had a team member announced as the Mountain West Player of the Week at the meet. Shot putter Maria Muzzio threw the season’s best shot put, tossing it 52 feet, 1.75 inches.

Bedard said that the meet will have “some of the best competition we’ve faced this indoor season.”

The Don Kirby Elite, hosted by the New Mexico Lobos, will take place at the Albuquerque Convention Center. Women’s long jump will begin the meet on Thursday at 1 p.m. with women’s and men’s pole vault, followed by women’s high jump at 1:30 p.m.

The meet will begin Friday bright and early at 8:30 a.m., beginning with women’s and men’s shot put. The field events will then lead into pole vaults and hurdles occurring at 9 a.m. and 9:30 a.m., respectively. Later in the day will be more relays and some finals for hurdles.

The full schedule for the meet can be found on the Lobos’ track and field schedule.

The importance of the Don Kirby Elite is twofold; the meet has some of the broadest and best competition the Rams have faced this year, and the location of the meet is also the location of the Mountain West Indoor Championships, occurring Feb. 27-29. Bedard said that this meet gives the athletes an opportunity to understand what the championships will be like, helping them for future preparation for the championship events.

The Rams have had a historically successful presence at the invitational. Last year, Kelcey Bedard was named the Women’s Field Athlete of the Week for her performance at the meet, notching the best weight throw for 14 years. Even though the meet has a focus on distance running, the Rams hope to continue their throwing success Thursday and Friday.

“I’m expecting this meet to be very competitive,” senior pole vaulter Josie Spitz said of the Don Kirby meet. “There are a lot of really big schools that are coming, which is really exciting because we don’t get to compete with them very often.”

Leo Friedman can be reached at sports@collegian.com or on Twitter @leofriedman13.