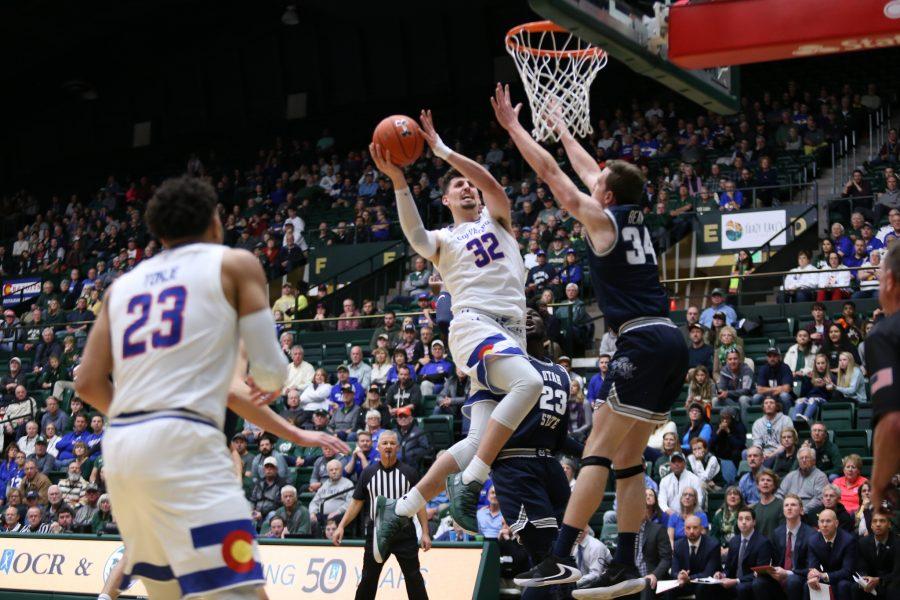 Nico Carvacho (32) goes up to dunk the ball against Utah State University. (Luke Bourland | The Collegian)

Nearly a month ago, the Rams took down the University of Nevada and University of Nevada, Las Vegas at home. The following week, the Rams won on the road against Fresno State, which historically has been a difficult contest for them. Around this time, Colorado State was firing on all cylinders, victorious in eight out of nine games starting on Jan. 4.

On Feb. 11, Utah State came to Fort Collins in the biggest game for the Rams this season. If the Rams won, they would still be sitting in second place in the Mountain West.

Now it is Feb. 20, and the Rams are sitting tied for third with Boise State and the University of Nevada, Las Vegas in the MW with records of 9-6. The team looks to not finish anywhere above fourth. Even worse, they could potentially drop down to sixth place.

The next week will make or break CSU heading into MW tournament play. Of the possible scenarios, let’s take a look at where the Rams could end up when they depart for Las Vegas in March.

Currently, Utah State and Nevada are tied for second with records of 10-5 in the conference. Utah State will have an easy finish to the season. The Aggies will play against Wyoming (last in the MW), San Jose State (second to last in MW) and New Mexico (fourth place team at 6-9). On top of that, Utah State plays the two worst teams in the MW at home. The Aggies will likely finish the season off 3-0 or 2-1, putting them at 13-5 or 12-6.

Nevada also has an easy route to the end of the season, as they match up against Fresno State (5-10, fifth in the MW) and Wyoming. However, they will have to take on San Diego State to finish off the season, and SDSU currently sits atop the MW. The Wolf Pack will probably finish 2-1 unless they shock college basketball and take down the undefeated SDSU.

Now, if both Utah State and Nevada go 2-1 and the Rams are able to win out, then CSU will maybe get into the top three. Winning out would include beating San Diego State on the road, which no team has yet accomplished.

If CSU won all three remaining games and Utah State and Nevada finish 2-1, we’d enter a three-way tie. In a three-way tie, “the combined record of each of the tied teams against the other teams involved in the tie shall be compared,” the MW rule book states.

If the Rams secure the fourth seed

The Rams — if they perform like earlier in the season — will be able to handle SJSU and Air Force easily at home. However, playing against San Diego State will likely result in a loss. At the end of conference play, this would put the Rams at 11-7, which would leave us still below the top three.

However, both Boise State and UNLV are tied with the Rams right now. Boise State has SJSU, New Mexico and UNLV for the last games on their regular season schedule. Based on the season so far, the Broncos should take care of business against SJSU.

Boise State has already defeated UNLV this season in Boise, but they have an awful 3-7 away record. The Broncos have yet to play New Mexico but will likely steamroll them. In order for the Rams to grab that four seed, the Broncos would need to finish the season 1-2.

UNLV has a tough end of the season coming up. The first matchup will be on the road against SDSU on Saturday. Then they will look for redemption against Boise State at home and then will finish the season off on the road against SJSU.  Now, they might do the one thing no one else has done all season and beat SDSU, but it’s doubtful.

Stranger things have happened, and SJSU might be able to take down UNLV on Feb. 29. However, based on SJSU’s overall record and the fact that it will be their fourth game in 10 days, a win for San Jose State is doubtful.

If the Rams get the fifth or sixth seed

Now, of UNLV and Boise State, if one team wins out and the other goes 2-1 and the Rams lose two of three games or all three, CSU could drop to sixth place (giving them either a 10-8 or 9-9 record). This will be unlikely but possible.

If Boise State and CSU tie, then Boise State will win the tiebreaker just for having a 1-0 record against the Rams.

On the other hand, UNLV and CSU have split their games this season. In this case, “each tied team’s record shall be compared against the team occupying the highest position in the standings, continuing down through the standings until one team gains the advantage,” according to the MW. If SDSU remains undefeated and Utah State stays in second, then UNLV gets the higher seed because they beat Utah State while CSU did not.

If New Mexico wins the rest of their games against Boise State, Air Force and Utah State and CSU drops their next three, there would be a tiebreaker for sixth place. The Rams have a 1-0 record against New Mexico, so they would win the tiebreaker.