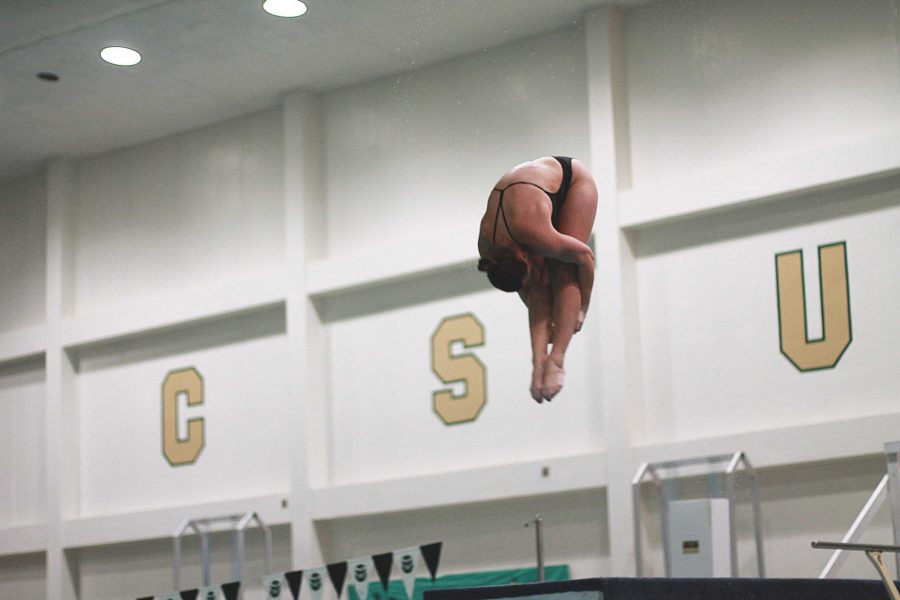 The CSU Swim and Dive team finished their season with a 3-4 record and defeating the University of Northern Colorado in February. (Natalie Dyer | Collegian)

The Colorado State swimming and diving team rounded out the end of their season with the Mountain West Championships in Minneapolis this past week. The team packed their bags and headed north for the first day of competition on Wednesday, Feb. 19, hoping to end the season on a high note in the Jean K. Freeman Aquatic Center.

Emotions are high, and muscles are sore, which makes the perfect environment to compete and a true test to see who really deserves to be on top of the podium. On the very first day of competition, Rams junior diver Skylar Williams set the tone for the championship. Not only did Williams set a personal record, but she took down the previous CSU record for the 1-meter board with an astonishing score of 313.15 on her last jump of the finals. Williams’ impressive score solidified her as the conference runner-up and gave the Rams a 28-point boost to their total championship tally.

“It feels so good,” Williams said. “I’ve been wanting to get that (and) be on the record board since the moment I got here. To finally get there, it’s such an accomplishment, and I’m so excited.”

CSU finished the first day of completion in sixth place with a total score of 122.

Friedrichs pulled out all the stops for her career-best, but unfortunately CSU ended their second day of competition slipping to seventh place with 274.50 points.

Arguably the swim and dive team’s best athlete Julia Box had no individual events the first two days of competition, but she broke her silence early in the third day of the Mountain West by placing fourth in the 100-yard butterfly with a time of 53.95.

“I was super aware of the emotions and feelings that go along with the delay of being able to individually contribute,” Box said.

Box helped propel the Rams back to sixth place with 533.50 points after another incredible individual performance. Box had no trouble placing fifth in the 100-yard backstroke with a time of 54.48 in the finals.

On the final day of the Mountain West, the Rams finished the competition at fifth overall with 830.5 points. Williams set the tone for the championships and ended the weekend emphatically. CSU diving coach Chris Bergere said Williams “absolutely crushed her dives” with a fourth-place finish in the platform dive.

The Rams represented the University well, outdoing themselves with many record-breaking scores and times.

“It’s not wholly surprising because we knew what they were capable of, but maybe not to this level, considering what they’ve done so far this year,” head coach Christopher Woodard said. “To see them get in there was great, and it very much was a passing of the torch. I could see the seniors talking to freshmen and sophomores about ‘This is your event now, and I can’t wait to see what you can do.’ That’s a special thing.”