Eagles keep the win train rolling with sweep of Barracuda 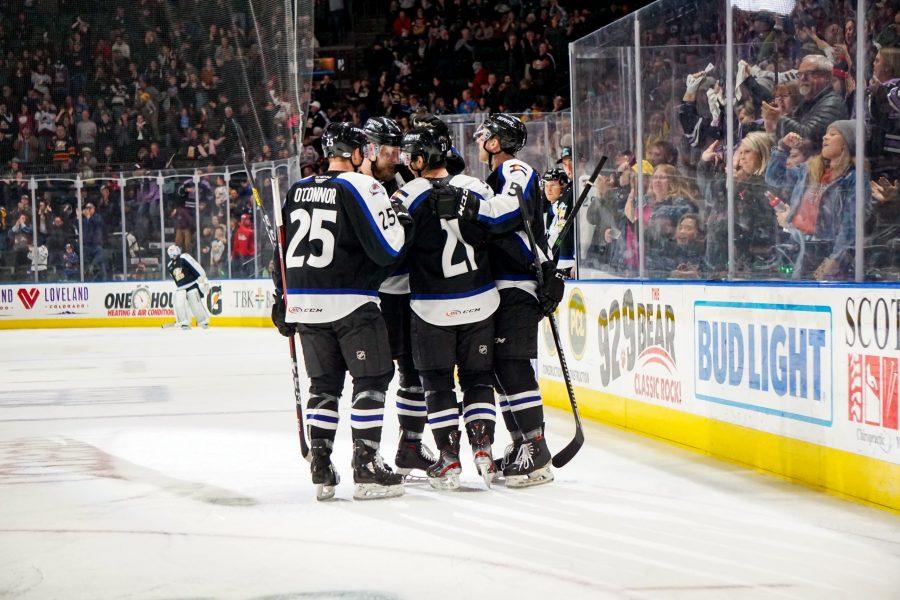 Near the very top of the laundry list of qualities that make a good hockey team is that good clubs don’t lose their home games.

A weekend split with an underachieving San Antonio team last week left a bad taste in the mouths of the Eagles. After taking four of a possible four points from the division-leading Tucson Roadrunners, the Eagles returned to the Budweiser Events Center looking to extend their point streak and defend home ice.

Hosting the San Jose Barracuda, a team that always seems to have their number when the Eagles get some momentum, Colorado needed two complete games to help keep their playoff push going.

Friday’s match with San Jose was an eventful one for the Eagles, as the team broke in their new goal horn for their fans; the Eagles lit the lamp five times en route to a convincing 5-1 win over San Jose.

Forward A.J. Greer, who was named the game’s first star (2G, 1A), got the party started with two breakaway goals. Greer’s second goal came in the second period after serving a delay of game penalty. Greer took a stretch pass as he exited the penalty box and capped the play with a nice finish, beating San Jose netminder Zachary Sawchenko and breaking a 1-1 tie.

Three Eagles, including Greer, scored multiple points in the game, and Hunter Miska shut the door as Colorado kicked off the weekend on a high note. Center Shane Bowers and right wing Erik Condra added a goal and an assist each as the Eagles pulled away from the Barracuda after a slow start in the first period.

Protecting home ice is certainly a trend the Eagles would like to continue, but their main focus coming into this weekend was an emphasis on winning both games, especially game two on Saturday. Through this season, Colorado has struggled on the second game when part of a back-to-back series, posting a 4-6-1 record at home in those games.

“We needed to take it to (San Jose) tonight,” Miska said following Friday’s win. “But it doesn’t matter if we don’t come tomorrow and show up. We need to play a full 60 minutes and hopefully come out with another two points tonight.”

In Saturday’s contest the Barracuda struck first blood, scoring two first period goals and taking that lead into the first intermission. Playing with a lead has proven to be a huge point of confidence for Colorado, and giving up two goals to start the game isn’t exactly how they wanted to begin.

“We had slow first periods on both nights,” captain Mark Alt said. “A couple bad bounces, those goals weren’t (great). We knew if we stuck to our game, came back out in the second and had more possession in their end, we were going to have success, and we did.”

Entering Saturday, the Eagles had a record of 0-9 when trailing after the first period, but Colorado rallied in the second period thanks to a boost from their power play. Finding the back of the net twice, the Eagles have scored on the power play in four of their last five games.

“This is the time of year where it has to start clicking,” Alt said. “You need special teams down the stretch if you want to make a good push. It’s nice to see both (power play and penalty kills) starting to click.”

Conor Timmins led the way with two primary assists while on the man advantage in the second. Alt added a goal of his own to set up a winner-take-all third period with the game tied 3-3, but neither team was able to break the stalemate, giving way to overtime.

Forward Sheldon Dries, who redirected one of Timmins’ point shots to send the game into OT, got the game winner while on the power play as the Eagles finished the night 4-3 with the man advantage.

Having won four games straight, the Eagles will remain at home as they host the Tucson Roadrunners Tuesday, Feb. 11 and Wednesday, Feb. 12.