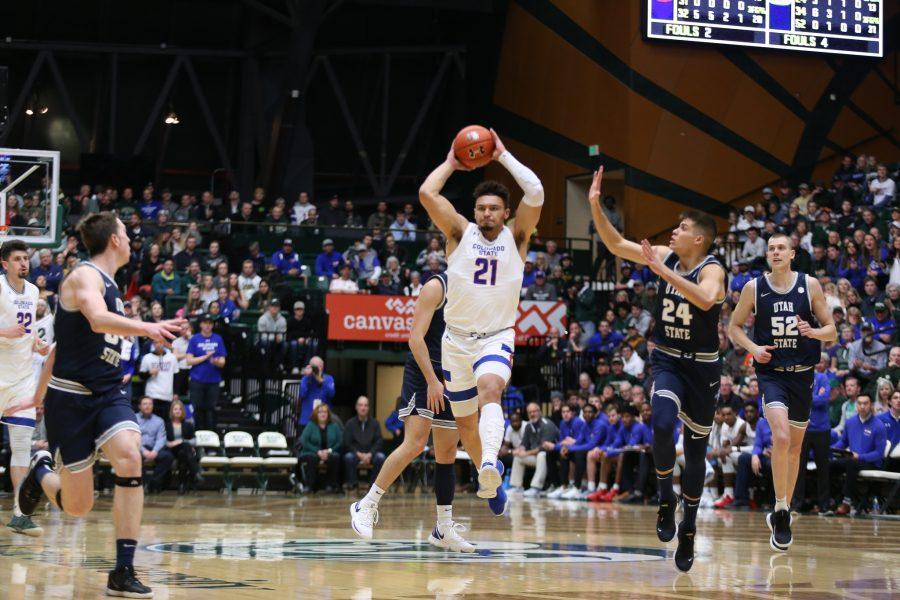 The Colorado State men’s basketball team fought and clawed until the very end but came up short in one of the biggest games of the season, losing 75-72 against Utah State.

This down-to-the-wire game was a thriller until the buzzer. At the end of the game, with a little over a minute and a half to go, Adam Thistlewood hit a clutch midrange baseline shot to make it a three-point game. This was following the Rams being down by as much as 10 points for the majority of the second half.

That comeback was sparked by a wave of Kris Martin 3-pointers. Martin hit three of them in the second half in addition to taking a charge to give CSU the momentum they needed to make it interesting.

Following Thistlewood’s midrange jumper, Sam Merrill did what he has done so often against not only CSU but all of his Mountain West counterparts. He nailed a 3-pointer over Nico Carvacho on a play that was fairly well defended. That shot returned the Utah State lead to four points.

“The shot that Merrill made over Nico (Carvacho) from deep, I mean, you could tell Nico (Carvacho tried) to make him dribble, but from my vantage point … I couldn’t tell from how deep it was, but it looked like Nico (Carvacho) almost blocked it,” coach Niko Medved said. “It looked like he almost got a fingertip on it, and if that comes off right there and we get the rebound, we are going, but … that was the shot of the game.”

However, with 10 seconds left in the game, Thistlewood hit yet another clutch shot. While coming off a screen, the sharpshooter nailed a 3-pointer, making it a one-point game.

CSU was forced to foul, and Utah State’s Abel Porter knocked in both of his free throws. The Rams still had a chance though, and that chance came on a corner 3-point attempt by the man with the hot hand: Thistlewood. Unfortunately for CSU, the tough shot clanked off the rim, and Utah State pulled away with the one-possession win.

The Rams had moments of brilliance as well as stretches of ugliness against the Aggies. Isaiah Stevens was once again impressive offensively; he finished with 19 points on 9-12 shooting while displaying a variety of moves. His up-and-under is extremely hard to guard, and he can make any midrange shot no matter the angle he shoots from or the way he releases the ball. This was illustrated on a Dirk Nowitzki-like fadeaway midrange shot in the first half that Stevens drilled.

He also looked extremely comfortable running the second unit. When the rest of the starters were subbed out, Stevens took on a heavy offensive burden but shone while scoring on most of those possessions, including an acrobatic reverse layup.

The defense for CSU wasn’t as good as it has been all season, but it wasn’t horrible and wasn’t for a lack of effort. A lot of it can be attributed to the brilliance of Merrill, who finished with a somewhat quiet 32 points. CSU showed hustle and toughness throughout the night on that end of the floor. Martin had a great charge, Carvacho hit the deck for a loose ball and Kendle Moore dove for a ball and saved it by throwing it off a Utah State player out of bounds.

“That was a big part of the game — not getting consistent stops — and that’s something we pride ourselves on,” Stevens said. “This season is turning over that new leaf and being able to get consistent stops on defense. Whenever we were able to, I felt we made the game extremely competitive, and we just need to be more consistent on that end.”

This loss hurts for CSU. The Rams came into the night sitting high in the Mountain West. Nevada, Boise State and Utah State were all right on their heels. The loss will drop them a few notches while also giving Utah State a better case for not only second in the Mountain West, but a potential nod to the March Madness tournament.

CSU hopes to bounce back in what should be an easier road game in Laramie, Wyoming, as they face the Cowboys on Saturday.