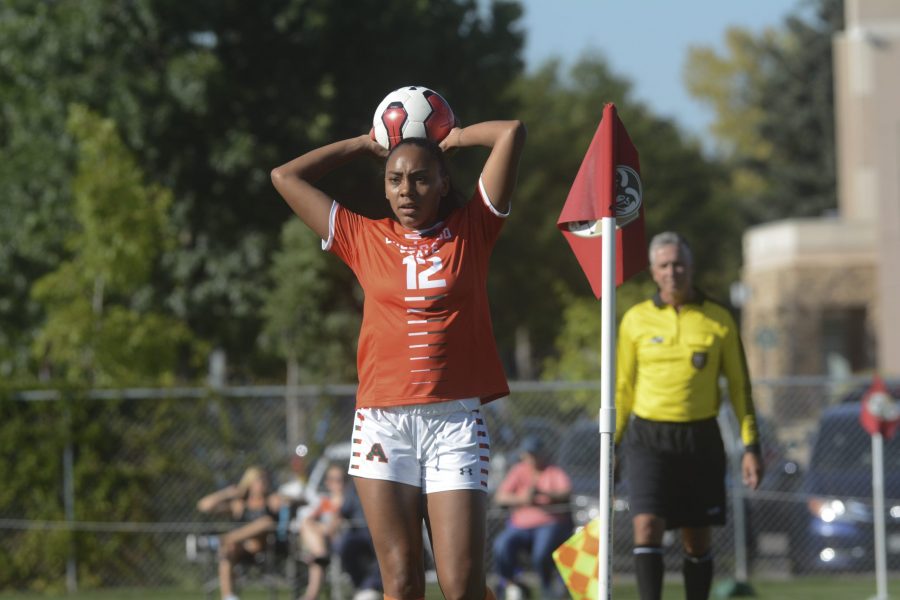 Defender Lauren Jones (12) prepares to throw the ball in against the Denver Pioneers in the Rams home 1-0 win on Sept. 13, 2019. Jones had one shot on goal in the game. The Rams hit the road next to face the Knights of Valparaiso University (Indiana)on Sept. 20, 2019. (Gregory James | Collegian)

Black History Month is defined as “an annual celebration of achievements by African Americans and a time for recognizing the central role of Blacks in U.S. history,” according to history.com. For a celebration that has been going on for several decades, there are still many barriers around race.

In 2018, according to the NCAA, only 5% of female soccer players were African American. The numbers have been reflected on the field for CSU defender Lauren Jones’ whole life.

“Growing up, I have been the only African American on my team, until (we) recently got Kendra Gipson,” Jones said. “(In) club (soccer), I was the only African American, (as well as for) the two first years of college, so I hope that I can be the role model for younger generations. I hope there are more that come into the sport, and I hope that they can achieve what they want to achieve by looking at us as role models.”

Despite Gipson and Jones being the only two African American women on the CSU women’s soccer team, it has never affected the way they view the sport.

To honor Black History Month and the lack of diversity on the field, Jones challenges herself to learn one thing about one new historical African American person each day.

The importance of Black History Month holds a special place for Jones not just to learn about new people, but also to celebrate all their accomplishments.

Taking a page out of Jones’ book, challenging yourself to learn a little bit each day is one way to honor Black History Month, and it helps her be the figure that she wants to be for a younger generation. But Jones is making a difference in the representation in her sport just by putting on her uniform.

“Black History Month is important to celebrate because it’s an opportunity for us to get the chance to learn about some of our accomplishments,” Jones said. “I think, historically, some of it is taken for granted, so I think this month is really to learn about what we bring to the table.”

The full interview with Jones can be found on CTV 11’s YouTube page here.