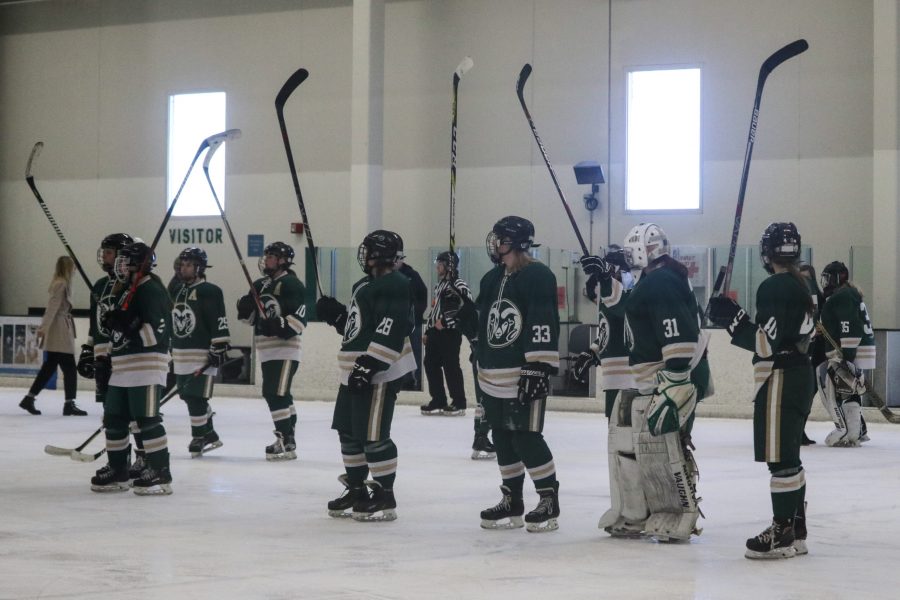 Change is inevitable, but the memories that come flooding back when a change occurs create a strong sense of nostalgia for what was and what will no longer be. The Colorado State women’s hockey team has endured many changes this season: new players, a new coaching staff, players leaving and a more balanced conference to compete in.

“It’s been an unbelievable year,” head coach Troy Watts said. “(Assistant coach) Rachel (Bellio) and I both have an extreme love for all these players. … It’s amazing how much you come to love these players in the span of two months, but now we’re eight months into it, and it’s that much better.”

On an emotional Saturday night, the Rams honored those who have changed their program for the better as they celebrated the graduation of three seniors on their senior night. It was an emotional affair for the team and their three seniors, Katie Hurley, Stephanie Talone and Kristen Perry.

“This is the best group of girls,” Talone said, “They’re not only teammates, but they’re life companions. Even though I’ll stop playing hockey, I know that they’ll have my back for the rest of my life.”

This trio of seniors have had quite the season for the Rams, combining for 60 points scored, but the impact these three players have had on this program goes beyond the stat sheet.

“When I’ve got one of my seniors crying and coming to give us a big hug, that says that we have created that bond, that this year meant something to her, as it does us,” Watts said. “You just hope they had a memorable time in the time we were able to spend together.”

The strength of the bonds formed over the years of playing together makes it difficult to accept the fact that they won’t be taking the ice in CSU uniform next season.

“Your senior night is surreal in the moment,” Bellio said. “Your parents come out. … It’s very emotional then. It is hard to flip that switch, but you have your whole team backing you up, wanting to be there for you.”

The time does come where the emotions must be put in check, as there is a game to be played. CSU’s senior night was originally set for Feb. 7, but due to an availability issue with DU’s goalie, the game was rescheduled for Feb. 22.

“I think we’ve prepared ourselves (for this),” Hurley said. “We knew it was going to be emotional. It’s been an emotional couple weeks leading up to (this). … We do understand that this is also a game at hand, and we need to take a step back, refocus and play.”

Sending the seniors out in their last home game at Edora Pool and Ice Center with a win was the plan, but the University of Denver had something else in mind.

The Rams had defeated Denver 5-3 on DU’s senior night back on Feb. 8, and the Pioneers decided to return the favor on Saturday night. Denver beat the Rams 4-2 thanks to a big third period, scoring three unanswered goals to steal the victory.

However, the season isn’t over for the Rams. CSU will now head to Salt Lake City for the 2020 Western Women’s Collegiate Hockey League playoffs. As the third seed, the Rams will face Arizona State University and rival University of Colorado Boulder.

The winner of the regional tournament will secure a bid in the 2020 ACHA Women’s D1 National Tournament in Dallas. Having reached the semifinals last season and regionals every year of the program’s existence, the Rams feel they have the experience and the pedigree to make it over the hump this year.

“Any team can win on any day,” Perry said. “I know we’re going in hungry. We’ve worked really hard this year. We got a new coach and some new team members. … The scores at the beginning of the year don’t (reflect) the team we are now.”

CSU’s games for the four-team WWCHL tournament will occur on Feb. 28 against ASU and Feb. 29 against CU, and the games will be streamed on YouTube on Utah’s channel, which can be found here.